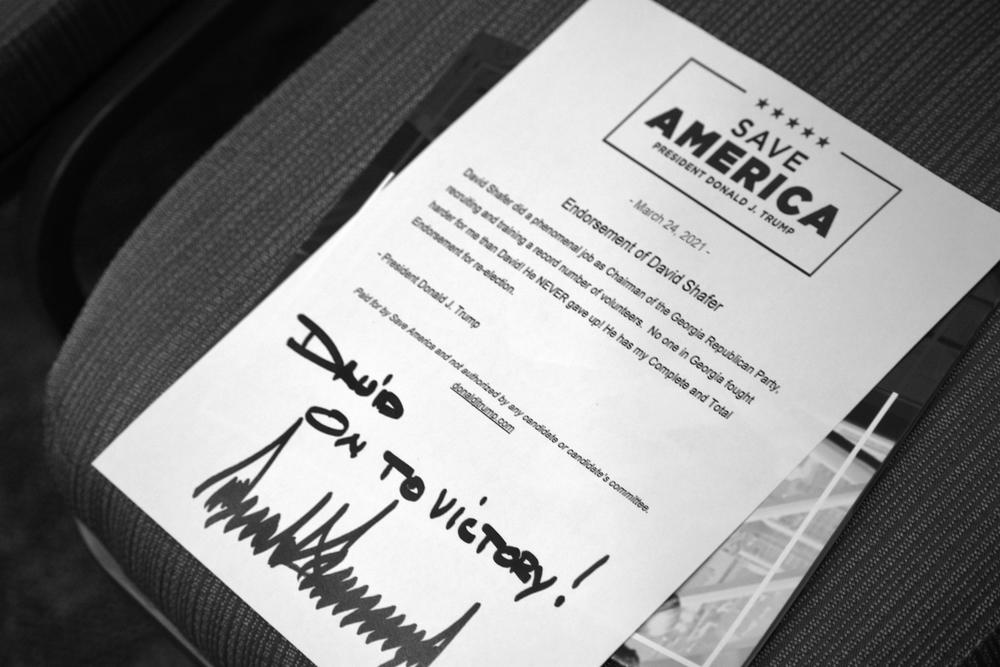 In a muted convention hall in Cartersville, U.S. Rep. Barry Loudermilk (R-Cassville) said he was optimistic for Georgia Republicans' chances in the 2022 election, scoffing at those who thought the GOP was divided after stunning losses in the presidential contest and both U.S. Senate seats.

"We're not divided; we're correcting ourselves going forward a little bit," he said to a crowd at the 11th District GOP convention Saturday. "I've never seen us more united than we ever have been before."

Multiple district conventions expressed their displeasure with Duncan and Raffensperger, and at least one, the Democrat-held 7th, censured conservative Gov. Brian Kemp for his role in not overturning a nearly 12,000 vote loss for Trump.

From Dillard to Dalton to Cordele to Alpharetta, 13 of the 14 districts met over the weekend to elect new district officers, approve resolutions and generally shape the direction of the party, with well over half the delegates and attendees across the state estimated to be involved with the party for the first time.

But unity is in the eye of the beholder, especially for those that have been cast as RINOs, or "Republican in name only," for not pledging full-on loyalty to Trump, his ideals and the belief that the 2020 presidential election was stolen.

The 1st District on Georgia's coast saw its convention in Jesup canceled after the venue pulled out over concerns of "possible disruptions and protests," according to the Savannah Morning News. At the county convention level, Chatham County initially failed to elect officers after a group of self-identified "patriots" clashed with party leaders over the nomination process, and the same group made plans to crash the district convention.

A Facebook page called "Savannah Freedom Exchange" affiliated with the splinter group claimed that delegates met in the parking lot of the original venue and moved to reschedule the convention at a later date, but party officials said that was untrue and only the State Executive Committee could decide when a new meeting could take place.

There are other signs that the Georgia GOP's main party plank heading into the 2022 election cycle is a focus on disputing the 2020 election, which was counted three times, including once by hand.

In Alpharetta at the 6th Congressional District meeting, party chairman David Shafer suggested without evidence that a surge in absentee ballots contributed to a fraudulent victory for President Joe Biden.

Shafer, who is running for reelection as chair and likely to be the Republican nomination for lieutenant governor next year, also had the party distribute Trump's endorsement of his campaign and a glossy 16-page "After Action Report" from the GOP's losses in November and January.

In the report, Shafer touted a "retooled" Republican party that raised record amounts of money, recruited record numbers of volunteers and knocked on a record number of doors. The brochure highlights a surge in social media engagement and listed several lawsuits the party participated in seeking to overturn the November election and enact restrictions on the January dual U.S. Senate runoffs, but neglects to mention all of those lawsuits failed.

Elsewhere in the state, some of the conventions tamped down resolutions condemning the actions of top conservative leadership in Georgia as Republicans face a difficult road ahead in statewide elections next year, despite holding both chambers of the legislature and every statewide elected office.

Democrats now control the White House and both chambers of Congress after Sens. Jon Ossoff and Raphael Warnock won in January on the strength of record Democratic enthuisasm and a cratering dropoff in votes from conservative strongholds between the general election and the January runoff.

The next test for messaging comes at the Georgia Republican Party's state convention on Jekyll Island, held the first weekend in June.