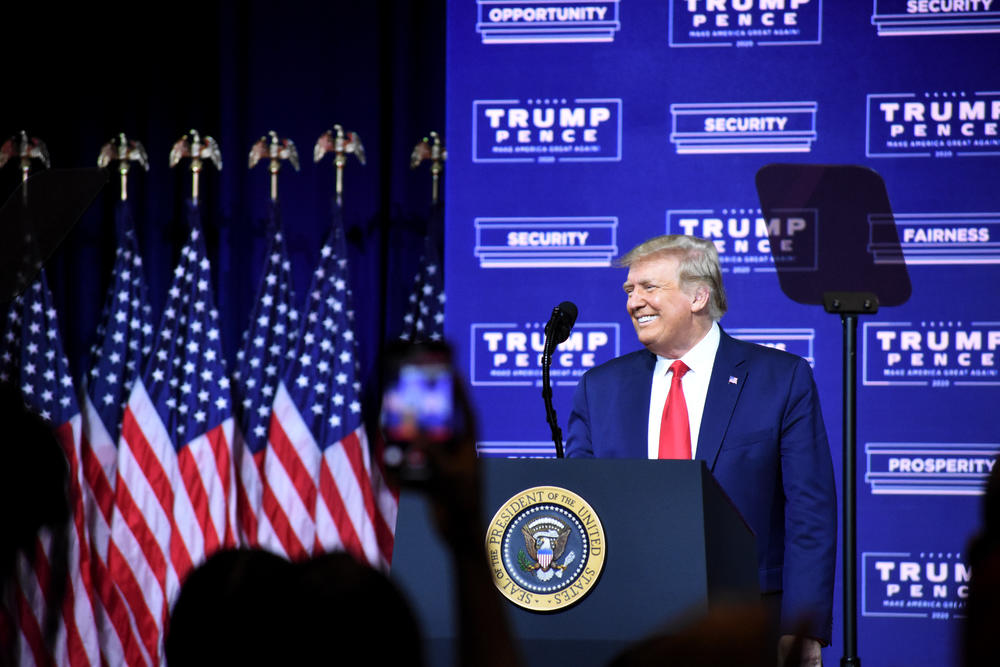 From the Georgia State House to the U.S. Senate, Republican elected officials are now attacking the very election infrastructure they created and have used successfully for years, as part of an effort to placate the outgoing president and hold onto power in a demographically-shifting state that voted for Joe Biden.

On Thursday, the Republican House speaker suggested that the secretary of state be a position voted on by lawmakers instead of the general public hours after a Republican-led House committee allowed President Trump's personal attorney to spread misinformation and attack poll workers by name. Vice President Mike Pence amped up a crowd in Augusta by applauding a lawsuit filed by the Attorney General of Texas in the U.S. Supreme Court seeking to overturn millions of votes in four swing states that went for President-elect Joe Biden, with support from numerous state and federal lawmakers who were victorious in that same election.

And Republican Sens. Kelly Loeffler and David Perdue, both on the ballot in a Jan. 5 runoff that will decide control of the U.S. Senate, have been in the thick of it all, calling on Secretary of State Brad Raffensperger to resign, supporting the longshot Texas lawsuit and failing to acknowledge that Donald Trump both lost the presidential race and Georgia's 16 electoral votes.

In the House Governmental Affairs Committee, chaired by Shaw Blackmon, lawmakers heard hours of testimony from witnesses that support several lawsuits seeking to challenge election results in Georgia. Giuliani, who was hospitalized with COVID-19 shortly after testifying in the state Senate last week, reiterated debunked claims of fraud in Fulton County pertaining to a 90-second video of vote counting at State Farm Arena.

He repeatedly used racist dog whistles while mentioning the names of election workers that have been cleared by wrongdoing, alleging the Black Fulton County employees were "surreptitiously passing around USB ports as if they were vials of heroin or cocaine" and said when counting ballots after Republican monitors and the media left, they "look like they're passing out dope."

In last week's Senate hearing, Giuliani brought out a conservative law professor who outlined steps the state legislature could take to meet and appoint its own slate of electors to cast votes for Trump.

But Gov. Brian Kemp and Lt. Gov. Geoff Duncan and threw cold water on the pressure to call such a meeting and said the law did not allow them to overturn the results.

"While we understand four members of the Georgia Senate are requesting the convening of a special session of the General Assembly, doing this in order to select a separate slate of presidential electors is not an option that is allowed under state or federal law," they said. " Any attempt by the Legislature to retroactively change that process for the Nov. 3rd election would be unconstitutional and immediately enjoined by the courts, resulting in a long legal dispute and no short-term resolution."

Paxton, who has been under indictment for securities fraud charges since 2015, argued in the lawsuit that there was a "one in a quadrillion" statistical chance that Biden won the four swing states, among other claims, and that Georgia should have rejected more absentee ballots.

In a filing Thursday, Georgia lawyers wrote a scathing rebuke of the lawsuit that stands little chance of being viable.

“The novel and far-reaching claims that Texas asserts, and the breathtaking remedies it seeks, are impossible to ground in legal principles and unmanageable,” the filing read. “This Court has never allowed one state to co-opt the legislative authority of another state, and there are no limiting or manageable principles to cabin that kind of overreach.”

Still, State Reps. Buddy Carter, Rick Allen, Drew Ferguson Austin Scott all signed on to an amicus brief filed by 106 House members asking the Supreme Court to allow the lawsuit to move forward, and both Perdue and Loeffler said earlier this week they applauded the case. Jody Hice and Doug Collins joined the group on Friday.

And more than two dozen members and members-elect in the Georgia General Assembly filed an amicus brief riddled with factual errors that said "passions" around the election can only be resolved if both sides are confident that the election is fair and transparent — something that would only happen if the Supreme Court invalidates millions of votes in that election.

Georgia Republicans passed no-excuse absentee voting about 15 years ago, a method that until recent times was rarely used and skewed older and Republican. Now, GOP members of the state Senate majority vow to remove that law after over a million Georgians used it to give Joe Biden a narrow edge in a state that hasn't supported a Democrat for president in nearly three decades.

Georgia Republicans also approved House Bill 316, an omnibus elections law that paved the way for the Dominion ballot-marking device voting system with a paper trail that many are now questioning, as well as other rules and regulations for voting. Lawmakers also want to get rid of secure absentee ballot drop boxes authorized by the State Election Board, chaired by Republican Secretary of State Brad Raffensperger.

But perhaps the most eye-popping proposal came from Ralston, the steady-handed leader of a shrinking House majority, who said in a press conference Thursday that the secretary of state's office declining to attend a committee hearing on elections was the latest example of leaving lawmakers out of the decision process.

"Today we have yet another example of this, of a constitutional officer who has chosen to be on his own and to disregard input from the people who he looks to for his budget and to consider legislative changes to his office as a result of that," he said. "I think it's time in Georgia that we look at an alternative way of electing our secretary of state."

Ralston suggested his preferred option would be the state House and Senate elect Georgia's top elections official, a move that is more symbolic than practical given the legislative hurdles needed to make it happen. Changing the way the Secretary of State holds office would require a constitutional amendment — approved by a supermajority of the Legislature and then passed by voters. Republicans don't have the votes to make such a drastic change.

The 2020 legislative session takes extra prominence this year because of redistricting, and while Republicans still control both chambers, Georgia's shift leftward could be accelerated by GOP attacks on election integrity and voting rights or slowed by strategic mapmaking. No matter what happens, it is clear that the Nov. 3 general election will have a lasting effect on Georgia laws and politics.