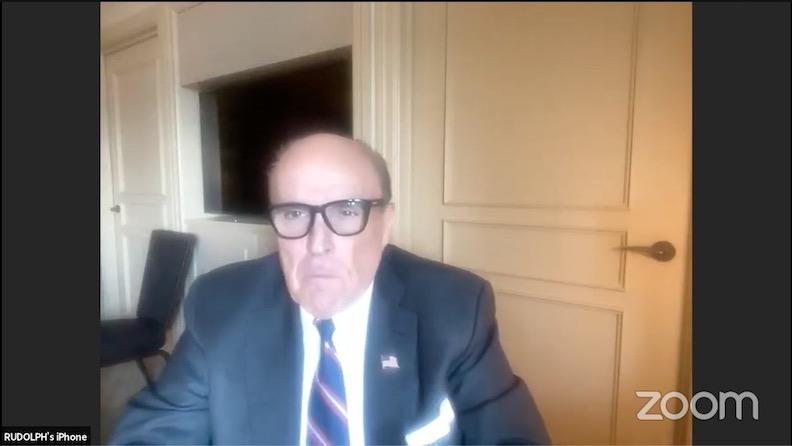 Rudy Giuliani, the president's personal attorney, who was just released from the hospital after getting COVID-19, reiterated debunked claims of fraud in Fulton County by playing a short snippet of surveillance footage from State Farm Arena. State investigators and county officials have reiterated that there was no "suitcase" of ballots illegally added into vote totals and that the video shows normal vote-counting processes.

Investigators also said that while some partisan monitors left when other election workers were done for the night, that nobody was instructed to leave. Georgia law does not require partisan monitors be present for counting to occur.

Giuliani also brought forth several other witnesses who spread conspiracies about voting machines and election results being hacked and repeated claims about widespread absentee ballot fraud.

Lawmakers also heard from J. Christian Adams, a conservative election activist who has pushed states to crack down on voter fraud. Adams suggested that Georgia get rid of rules that allow those that are 65 and older, disabled, and military and overseas voters to check a box to request an absentee ballot once and receive one the rest of an election cycle. Adams also said incorrectly that absentee-by-mail ballots cannot be "cured" if there are issues.

"If somebody sitting at the kitchen table, mistakenly votes a mail ballot and fills it out wrong or does the envelope wrong, they can't fix it," he said incorrectly. "They mail it in. And these are the sorts of ballots that get rejected that they get disenfranchised, because it's hard to cure them."

Georgia law allows voters to spoil ballots and request a new one or vote in person. If there are issues with a signature, or if the signature is missing, Georgia law requires local election officials notify voters of the issues and there is time to cure and fix the issues.

Another witness was Matt Braynard, who was paid $40,000 by the Amistad Project, affiliated with the conservative legal interst group the Thomas More Society, to analyze data of alleged election fraud.

Braynard claimed to have thousands of examples of specific voters that should not have been allowed to cast ballots in this election, but a quick search of records by GPB News found registered Georgia voters were included in spreadsheets provided as evidence in a case filed by President Trump and David Shafer, chair of the Georgia Republican Party.

Democrat Bee Nguyen of Atlanta also said that she reviewed Braynard's data, and told the committee that of the first 10 names that were alleged out-of-state voters, she found public records that confirmed eight of them were longtime Georgia voters and property owners and one was a duplicate entry.

Nguyen also said a list of voters supposedly registered at post office boxes includes people that a quick Google search shows live in two sets of apartments or condos that have a mail center underneath it — including both Republican and Democratic voters that she contacted.

"For those two buildings alone, I've identified at least 70 individuals in the first building that are on this exhibit having been accused of disguising their residential address as a P.O. box," she said. "And the second list, there are at least 58 folks that are named for that specific apartment complex."

Braynard's data is one of the main pieces of evidence used in several lawsuits that are attempting to overturn Georgia's election results or call for a new election.

"First of all, I actually want to thank you for helping to raise issues to help better validate data," Braynard said after hearing the lawmaker question his data. "It's only with strong scrutiny that we're able to be completely confident in our findings."

The hearing paused for a break shortly after noon and will resume with more testimony at 2 p.m.

From the Georgia State House to the U.S. Senate, Republican elected officials are now attacking the very election infrastructure they created and have used successfully for years, as part of an effort to placate the outgoing president and hold onto power in a demographically shifting state that voted for Joe Biden.