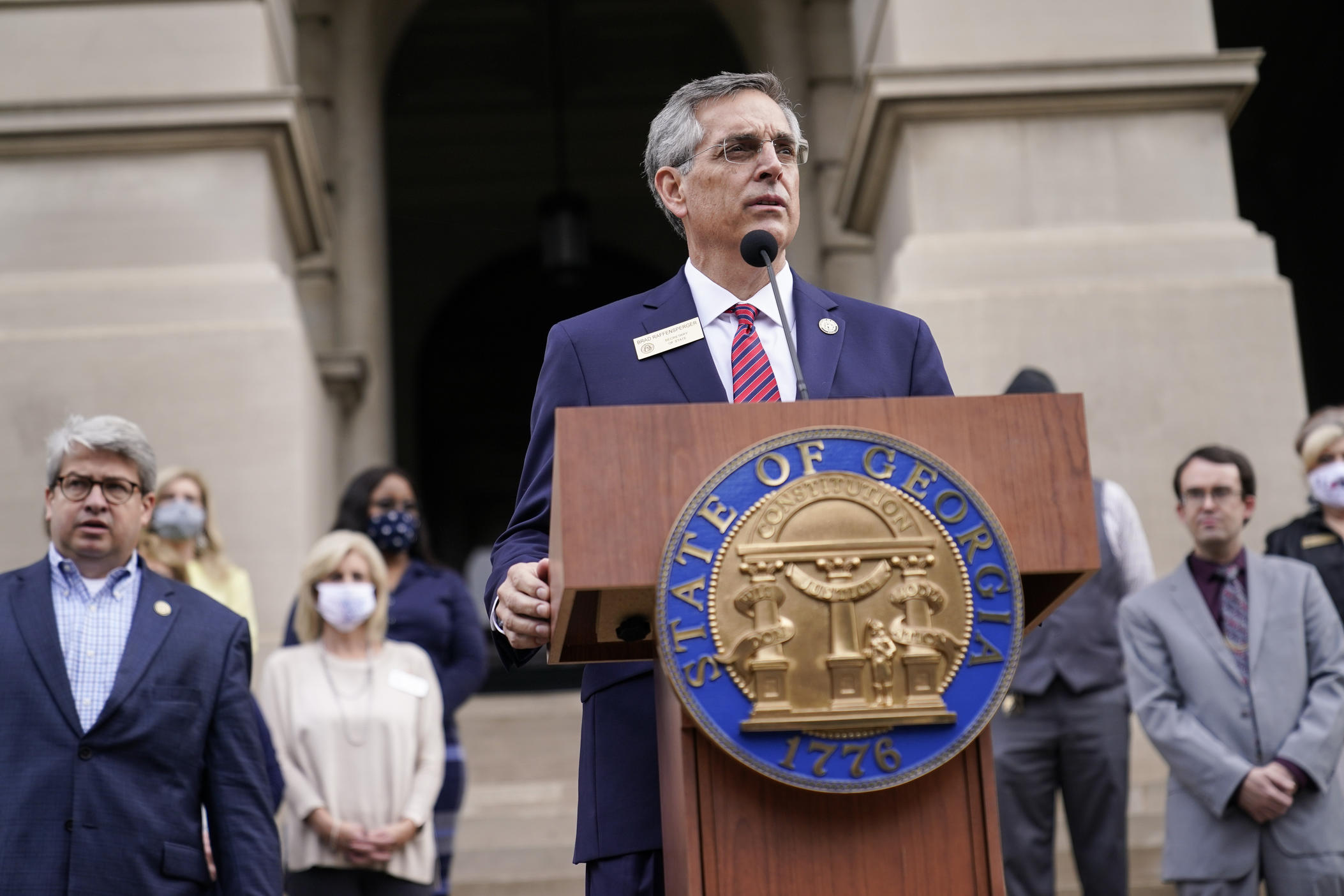 It’s Nov. 23, and five million ballots are being counted for a third time in as many weeks. Law enforcement officials are protecting the secretary of state and top election staff following death threats. In addition, a notably prominent group of Republicans, including President Donald Trump and both U.S. senators on January’s ballot, continue to attack the way in which Georgia’s elections were run.

Republican Secretary of State Brad Raffensperger has been in the headlines a lot lately — first, as top Republicans called for him to resign, then last week as he responded to those criticisms.

“I’d tell the candidates that are running: you best get at it, quit looking back and quit trying to talk about what the Secretary of State’s doing,” Raffensperger said. “You better be worried about your own campaign.”

The mild-mannered engineer spent several days lobbing bombshell after bombshell in interviews. On Nov. 16, he announced that Sen. Lindsey Graham potentially pressured him into tossing legally cast absentee ballots. He has also called Rep. Doug Collins a “liar” and a “failed candidate,” and has suggested that President Trump’s rhetoric about voting by mail could have cost him a victory in Georgia.

We’ve also heard a lot in recent weeks from Gabriel Sterling, the state’s voting system implementation manager. He has been delivering press conferences filled with facts, debunking misinformation and answering every single question reporters had.

Sterling has been the face of the post-election process in the Peach State, but at the end of the day Brad Raffensperger’s name is on the office.

On Thursday, I sat down with the state’s top election official to check in and see what he had to say about the chaos unfolding. He didn’t take the bait.

“I'm not going to have any zingers,” Raffensperger said.

He went on to recall a piece of political folklore. Legend has it that, during the 1948 presidential campaign, when a supporter yelled “Give ‘em Hell, Harry!” to Harry Truman, he responded: “I don't give them Hell. I just tell the truth about them, and they think it's Hell.”

The truth, Raffensperger said, is that Georgia conducted a free and fair election.

“The challenge that we have is it was a very close election and one of the candidates didn't expect to be 14,000 votes behind after all the absentee ballots were counted, and we understand that because it had been reliably red for a long period of time,” he said. “And so people are questioning what happened. But looking from a system standpoint, it was a successful election.”

The president had attacked him. His own party turned against him. But through it all, Raffensperger said he maintained inner peace that he was doing the right thing.

“I love that saying that calm breeds calm, that panic breeds panic,” he said. “We’re just calmly going forward and doing our job. We want to make sure that every vote is recorded correctly. That's what we're called to do. We have the law and this is a nation of laws and we follow the law. I'm a traditional Republican. Always have been. And I'm just really a believer in following the law, obeying the rules.”

Another word he likes to use is "integrity."

“It's very important that there's integrity in the election process and there'll be integrity in our office,” Raffensperger said. “I believe that integrity still counts.”

Raffensperger is a Republican. He supported President Trump, and still does even though he has been thrown under the bus and blamed for Trump's loss. He said that, in 2016, with a Republican president, a Republican House, and a Republican Senate, the federal government could have implemented election reforms that would have improved the nation’s confidence in the integrity of its elections

Despite the swirling conspiracies of election fraud, there has been no evidence of widespread problems that could have clouded results, and no reservations from the top elections officials that things were handled correctly. Electronic audits and hand recounts have proved that the election process has been sound.

“It's really been a big rumor whack-a-mole,” Raffensperger said. “And that's where, at the end of the day, the facts will win out because facts always win and people can say what they want. But you can't argue with the cold, hard facts.”

Except some people have tried. A growing number of Republicans believe the voting laws and system — both picked by Republicans — contributed to the president’s defeat and should not be trusted.

Raffensperger has bent over backwards to provide transparent updates on the election. He has published results of the risk-limiting audit, encouraged counties to live stream the process, and answered dozens upon dozens of questions from the press daily.

“I said that half of America will be happy and half America would be satisfied with these results,” he said. “And I would be disappointed when I put on my Republican hat. But these will be the results just because that is the will of the Georgian voter.”

Still, in the days that followed our interview, reporting facts has been an uphill battle. Normal steps in the post-election process have been corrupted by the incredibly partisan nature of voting.

Gov. Brian Kemp, who served as secretary of state for two terms, held a brief and bizarre press conference at the certification deadline Friday. Of the 505 words he spoke, only 11 of them mattered:

That certification is legally the next step in the election process, and something that almost seemed to have gotten buried by the rest of the press conference in which he took no questions.

Elsewhere, he said state elections officials should audit the signatures on absentee ballot envelopes because Georgians are “extremely concerned about this.”

“It seems simple enough to conduct a sample audit of signatures on the absentee ballot envelopes and compare those to the signatures on applications and on file at the secretary of state's office,” Kemp said.

However, every signature on every absentee ballot envelope was already compared by county elections workers before they allowed the votes to count. And the signatures on paper absentee applications were checked before ballots were even sent out.

People who used the new online absentee registration portal had to supply their driver’s license number and address to match their identity.

Now we have a recount of the state’s 5 million votes because the official margin between candidates is within half a percentage point.

Echoing Gov. Kemp’s comments, Sens. David Perdue and Kelly Loeffler, in addition to the executive committee of the Georgia Republican Party, are now supporting the president’s request for a recount and demanding the state conduct it differently than the law allows.

They, too, want to carry out an audit of the signatures. But that’s not how the process works, and these demands set the stage for continued opposition to results. That seems to be a driving force for the GOP’s get-out-the-vote strategy for the Senate races.

Still to come: contrary to the way the news has gone for the last few weeks, November’s election was actually the smoothest in recent memory. We will go behind the scenes to discuss why and what it means for the January runoff.

Battleground: Ballot Box is a production of Georgia Public Broadcasting. Our editor is Wayne Drash, our intern is Eva Rothenberg, our show is mixed by Jesse Nighswonger and the Director of Podcasting is Sean Powers.