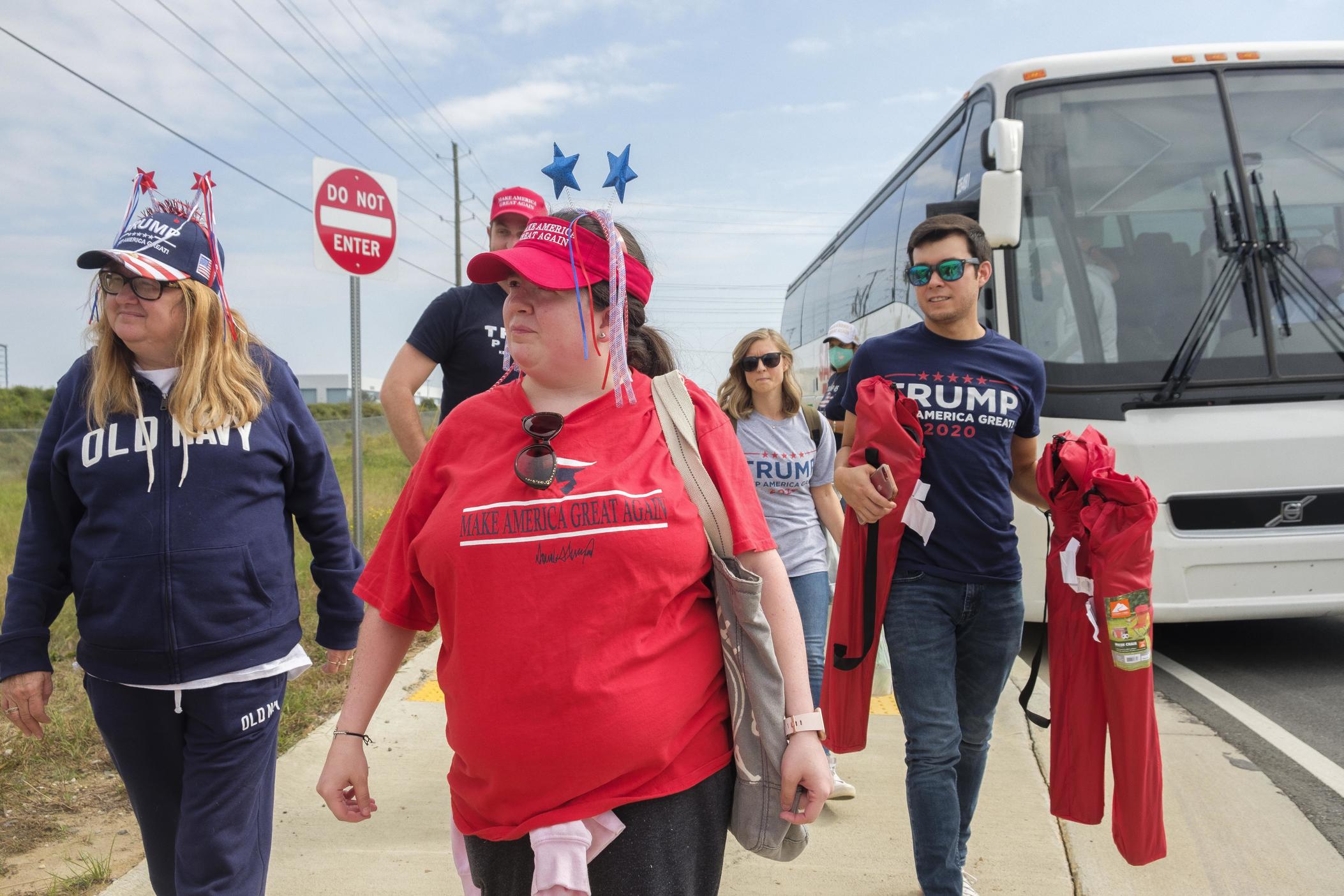 President Trump’s barnstorming rallies are nothing new. They still have some of the same classic rock tunes for a soundtrack. They still pack out airport tarmacs. But what is new in this final month of the presidential campaign is the likelihood for Trump’s rallies, like the one planned for Macon on Friday, to spread the coronavirus.

When Trump last visited Macon, in 2018, and after the screams and chants from his supporters subsided, he repeated a complaint from many other of his rallies: The media never gets the crowd size right.

“I really wish the fake news media would show the crowds,” Trump said from the stage inside a hangar at the Middle Georgia Regional Airport.

Thousands had indeed come to see Trump stump for then-gubernatorial candidate Brian Kemp. People who weren’t in the hangar spilled over onto the runway behind the press deck.

That was 2018, but similar scenes have been playing out in places like Sanford, Florida, and Des Moines, Iowa, in the days since Trump and about 20 people close to him were diagnosed with the coronavirus.

That leads Joshua Weitz, professor of biological sciences and physics at Georgia Tech, to a piece of advice for people thinking about attending the Trump campaign rally planned again for the airport in Macon this Friday.

“Go to this event recognizing that there is an almost certain risk that someone in that crowd will have COVID-19,” Weitz said. 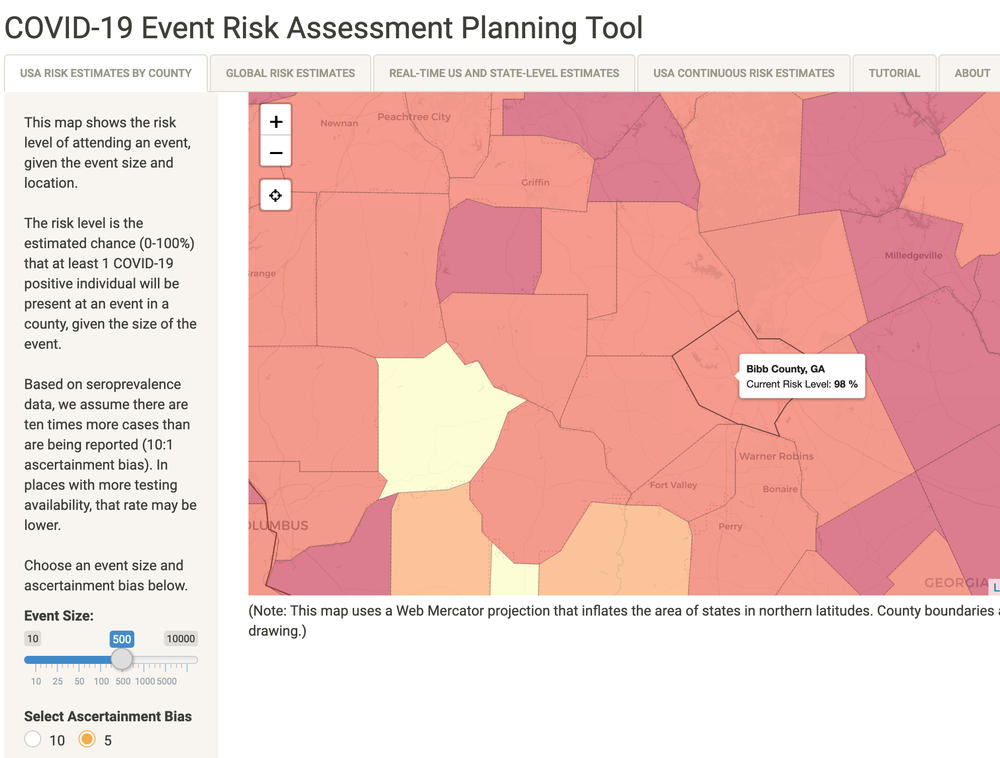 The Georgia Tech COVID-19 Event Risk Assessment Tool currently puts the risk of encountering someone with COVID-19 in a crowd of 500 at 98%.

Credit: Prof. Joshua Weitz and Prof. Clio Andris at the Georgia Institute of Technology, along with researchers at the Applied Bioinformatics Laboratory and Stanford University.

The rental agreement between the Trump campaign and Macon-Bibb County acknowledges the rally will likely be in violation of Governor Kemp's COVID-19 emergency order. But Weitz came to his conclusion through an online tool he and others developed called the COVID-19 Event Risk Assessment Planning Tool. The tool uses local data to predict the likelihood of encountering someone with COVID-19 when you get together in a crowd.

Weitz said the tool draws from latest data from the Georgia Department of Public Health, and then augments that in the context of CDC guidance on how much that data undercounts the actual number of infections.

“Between five to 10 cases may actually be taking place or may actually spread for every one that's documented,” Weitz said.

Weitz said a Georgia-specific study found the ratio was about 10 cases for every one counted by DPH.

Then the tool considers the number of people you expect to attend the event.  You can adjust it to play with different crowd sizes. For instance, take a low estimate for a Trump rally: 500 attendees on Oct. 16.

That’s a 98% probability that someone in that crowd of 500 will have COVID-19, and could spread the virus. And, Weitz said, given what we know about people who have the virus but have no symptoms, that person spreading the virus in a crowd could be you.

Calvin Palmer, head of the Macon-Bibb County GOP, is not worried about the virus. And he said 500 people at a Trump rally is lowballing it.

He’s guessing of course, but the Georgia Tech crowd projection tool says a crowd of 20,000 would have a better than 99% chance, essentially a 100% chance, of containing someone with COVID-19.

Palmer is dubious about this science.  He said he’s not even sure the virus wasn’t made in a lab.

“This virus, it was in a level four containment bunker. That's where they developed this thing,” he said, hinting at a conspiracy theory debunked by Snopes.com and others.

Even though he doesn’t think there’s any real danger associated with the virus that is known to have killed more than 215,000 Americans, he said he’ll likely wear a mask at the Macon rally on Friday.

“I would probably, to keep everybody safe around me, to make sure I don't offend anybody or make anybody feel uncomfortable,” Palmer said. "I would wear my mask." 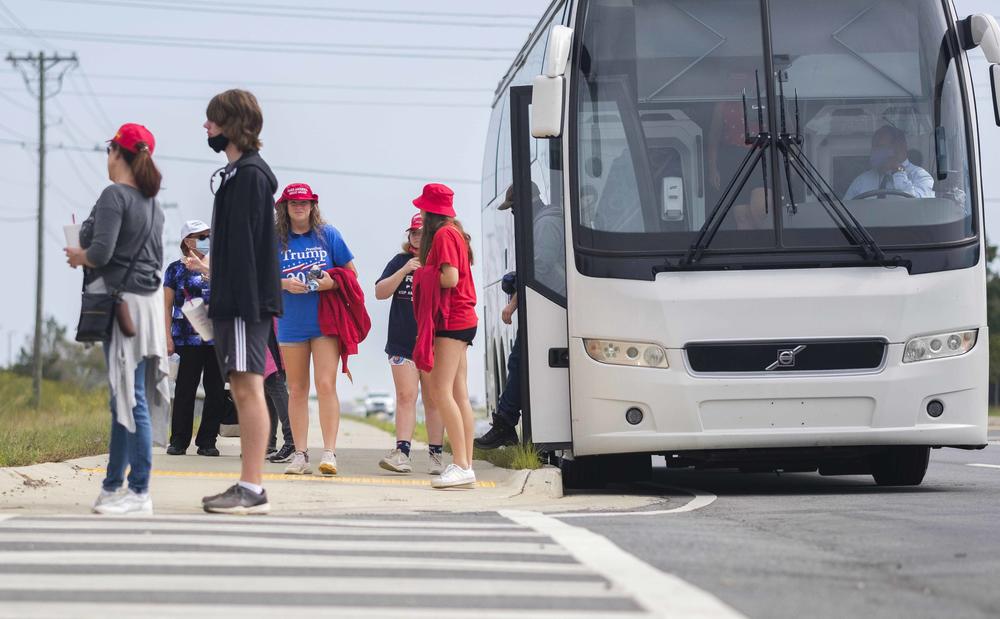 Trump rally goers were carried 50 at a time from their cars to the Middle Georgia Regional Airport on Friday in travel coaches.

Georgia Tech’s Joshua Weitz said Palmer and others should take other steps.

“I mean, there are ways to do this in a safer sense,” Weitz said. “Like having it outdoors is good. If there was a required mask rule, that would be good.”

Weitz added that people should only mix with the people they came with to the rally and maintain a healthy physical distance, too.

Macon-Bibb GOP head Calvin Palmer said the Trump campaign has told him nothing about what COVID-19 safety precautions they might have at the Friday rally. Macon-Bibb County government says the same, as does the local health department, the North Central Health District.

As for the Trump Campaign, it is treating the threat to public health as real. To get a ticket, you must first agree you won’t hold President Trump liable should you get COVID-19 at his rally. 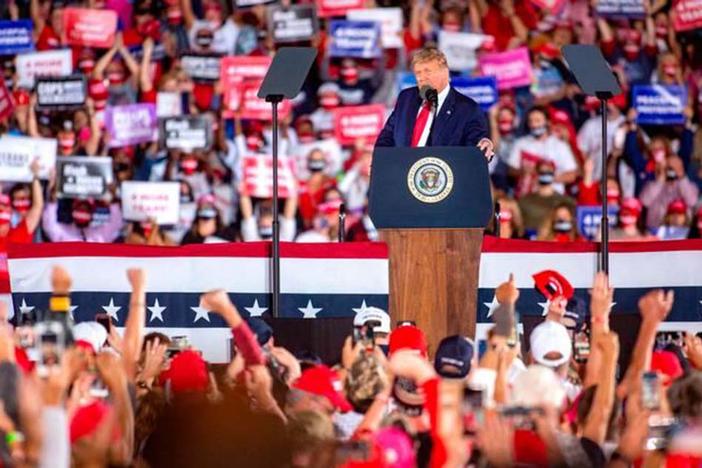 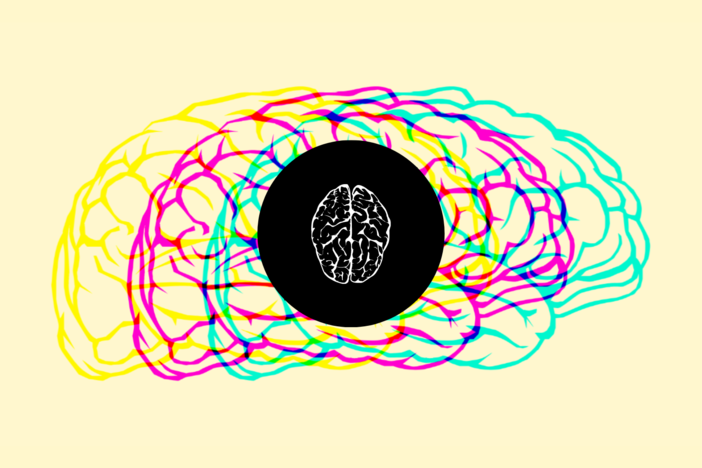 Friday on Political Rewind: Through the past year and-a-half, public health lockdowns, social isolation and economic strain exacerbated mental illness in many communities. And recently, the surge of COVID-19 cases caused by the spreading delta variant is a source of renewed anxiety and angst. 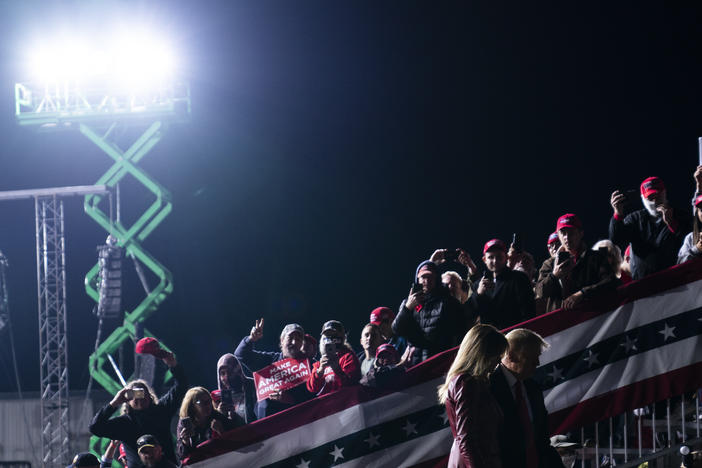