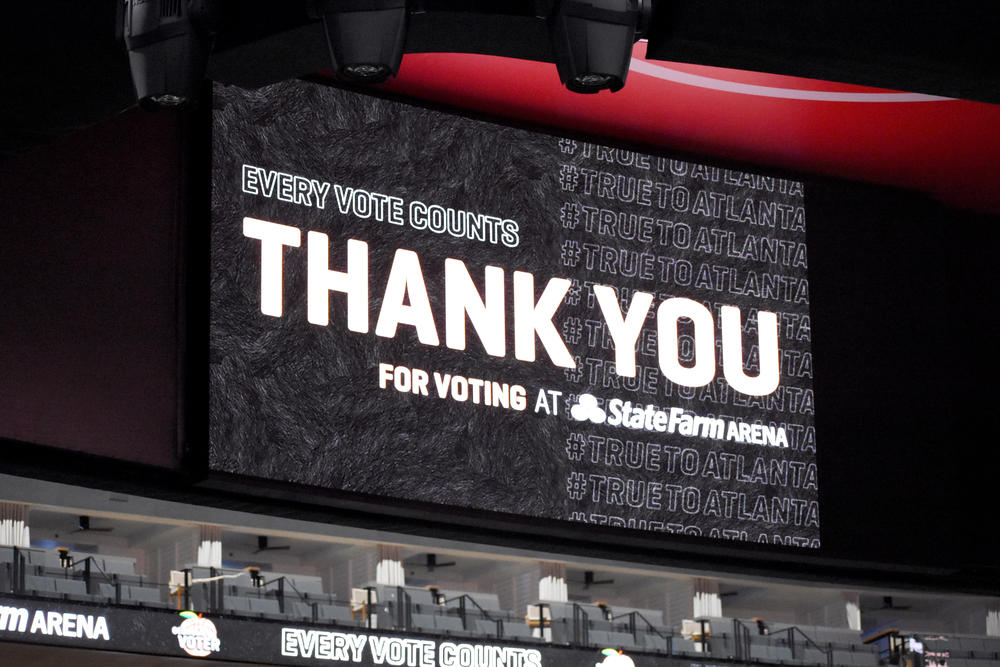 A sign thanks voters for voting at State Farm Arena in Atlanta.

Fulton County is adding more high-capacity early voting locations for the November election, including the High Museum of Art and the Georgia International Convention Center, as officials seek to minimize lines and problems that plagued the June primary.

In all, Georgia’s most populous county will have 251 polling places open for Nov. 3, up more than 80 from the June primary after the coronavirus shuttered many churches and other locations were unavailable.

About 60% of the county’s 787,000 active voters will be affected by recent polling place changes, either because their assigned precinct will vote somewhere different or because they are staying put while other voters move . You should check the state’s My Voter Page, mvp.sos.ga.gov, to find your precinct and polling place for the election before you vote.

As officials plan for a record number of Georgians to cast their ballot in the general election, Fulton County Elections Director Rick Barron said that in addition to the High museum and the GICC, the mega-voting site at State Farm Arena will be ready to accommodate large numbers of residents who show up during the three-week early voting period that begins Oct. 12.

“They actually approached us on that and said they would like to be an early voting site,” Barron said about the midtown Atlanta art museum. “And that just seems like an ideal site. Parking will be free there, as it will be at State Farm Arena.”

Relatively few voters took advantage of the massive State Farm polling site for the low-turnout August runoff that had 100 ballot-marking devices spread throughout the arena, a number that will triple for November.

The county will also have pop-up voting outreach locations at Georgia Tech, Georgia State and Atlanta Metropolitan State College, and plans to bring a bus outfitted with voting equipment to different sites throughout the county during early voting as well.

The other change approved at Monday’s meeting expands the number of polling places in use on Election Day, adding to the 40 new locations approved earlier this month that affect nearly a quarter of the county’s voters.

While the changes are being made closer to the election than the law typically allows, the extenuating circumstances of the COVID-19 pandemic makes it acceptable, elections officials said, in an attempt to reduce wait times and the number of voters assigned to each poll.

In total, 17 precincts will split voters up into at least two voting locations to decrease the amount of registered voters assigned to each poll.

For example, nearly 9,400 voters in precinct 06D who normally vote at Morningside Baptist Church will be split between that church, Morningside Presbyterian and Haygood Memorial United Methodist Church.

The Park Tavern voting location that saw more than 16,000 voters from five precincts assigned to it for the June 9 primary has undergone the most changes.

Nearly 7,000 voters in precinct 02L1, who voted at Lutheran Church of the Redeemer in elections before the pandemic, at Park Tavern for June and Piedmont Park Magnolia hall for the August runoff, will now be split between that church or into a new precinct that votes at The Fox Theatre.

More than 5,000 voters in precinct 02A were moved to Magnolia Hall for the runoff, but some of those voters will be split into a new precinct that votes at the Historic Academy of Medicine.

The board approved another change that would move about 4,000 active voters in precincts 02F1 and 02F2 from the Central Park Recreation Center to Ponce City Market, 2,300 voters in 07M from the Cathedral of St. Philip to Buckhead Theatre and plans to split up a 9,000-voter precinct, UC02A, into smaller locations, for example.

In addition to sending letters to affected voters, Fulton County will also post an updated list of polling places on its website, send information to the county’s mayors and plans to work with the social media network NextDoor to provide targeted messaging about changes.

It is also important that voters check their My Voter Page for the latest information on their precinct and polling place.

Absentee ballots will be mailed out by the end of this week. Both state and local elections officials are urging Georgians to vote ahead of Election Day, either early in person or by mail.