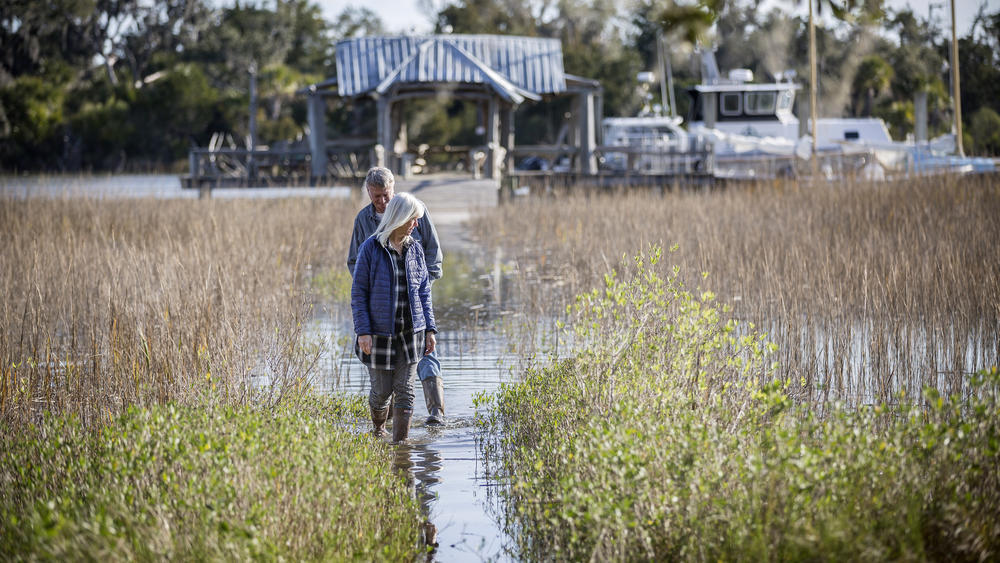 Editor's Note: This story is part of a series that originally aired in (February 2020), before the COVID-19 pandemic interrupted our reporting. GPB has updated these stories to present the complete series in September 2020. The series is part of the Pulitzer Center’s Connected Coastlines reporting initiative. For more information, go to pulitzercenter.org/connected-coastlines.

When you flush the toilet, it goes either to your local sewer system or into a septic system on your property. Without a sewage treatment plant, septic systems rely on having plenty of soil and space to filter out the harmful stuff. But as sea levels rise, septic systems are running out of space.Compromised septic systems can pollute nearby waterways, and climate change is making the problem worse.

To get to Wanda and David Scott’s dock, you take a gravelly walkway that cuts through the marsh beyond their yard. Unlike their neighbors’ elevated, wooden walkways, it’s down close to marsh level, so sometimes it floods, which can make it tough to have friends over.

“Like today, I would have thought, are they gonna have to wade in water to get to the dock?” Wanda Scott said on a recent afternoon. “We knew that maybe two or three times a month [it would flood] before. Now it's pretty regular.”

Like most people in their Whitemarsh Island neighborhood, the Scotts rely on a septic system. And the ever-encroaching tide has Wanda Scott worried.

“It makes sense to me that if septic is this close to the marsh and the marsh floods at high tide more regularly now, then the outflow of all these houses...it’s being part of the part of the outflow,” she said.

Water from the toilets, showers and sinks in the Scotts’ house all goes into a septic tank. The solids stay in the tank, where bacteria break them down. Then the still-contaminated water, called effluent, flows into specially-engineered pipes and soil, called a drain field.

“You have to maintain a certain level of separation between the septic drain field and the groundwater table so that the effluent flowing to the drain field has space to percolate through the soil and be treated by all the microbes in there,” said Scott Pippin of UGA.

But sea level rise will reduce the separation.

“So the first impact is going to be less treatment of the effluent that comes out of the septic systems. So that's going to translate into potentially pollution,” Pippin said.

Pollution, that is, of the waterway where the Scotts and their neighbors swim, and fish, and go boating.

There is not water quality testing of that creek, so residents and officials alike don’t actually know if it’s polluted. Several residents are pushing to get regular testing.

But ten miles away, Marc Frischer with the Skidaway Institute of Oceanography has shown there is bacteria from human waste in the Vernon River.

So Frischer and his team simulated a leaky septic system. They found leaks probably end up in the waterway long before you would notice a problem at home.

“And we don't see it. Out of sight, out of mind, right? Until there is a problem,” he said.

David Scott on Whitemarsh Island said they have problems when it rains a lot.

“Our drain field, which is in the backyard for our septic system, it gets saturated as well. It can't, it can't get rid of it, you know,” he said. “So we back up and, you know, have to call a service to come pump the septic tank out.”

Climate change promises more rainfall to back systems up, as well as higher water levels to compromise the filtration. Florida already sees regular issues with its failing septic systems.

But the question is: how do you fix a problem that’s out of sight, out of mind? Coastal Georgia communities and researchers are trying to find an answer before it’s too late.

And listen for more stories in this series on GPB radio.