For this special edition of "On Second Thought," we invited a panel to discuss one central question: are Georgia schools prepared to support youth mental health in the coming school year? 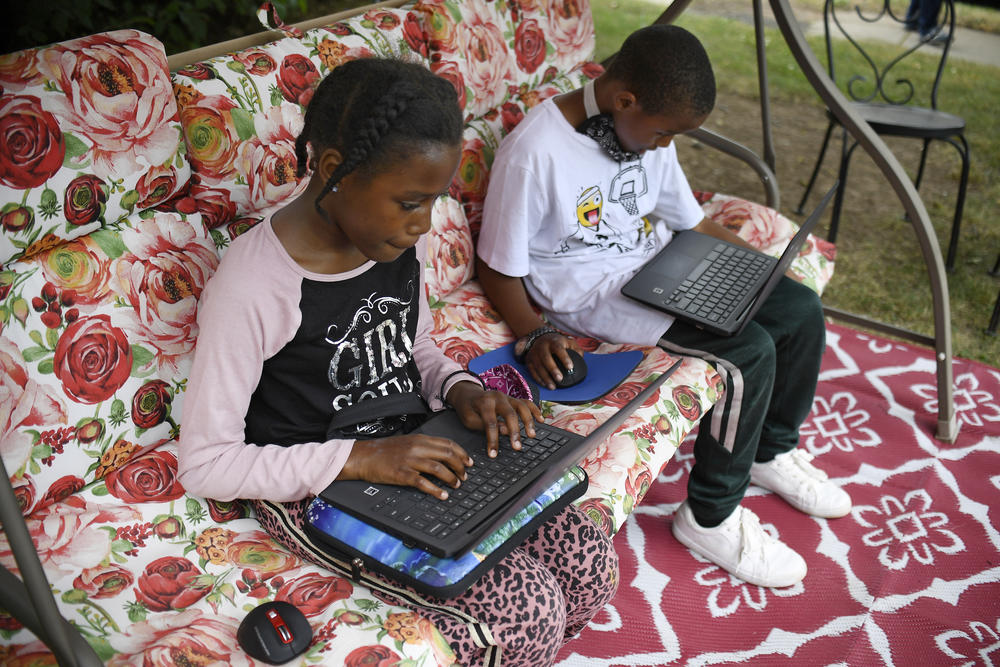 Fourth-grader Sammiayah Thompson, left, and her brother third-grader Nehemiah Thompson work outside in their yard on laptops provided by their school system for distant learning.

This back-to-school season is unlike any other in history. COVID-19 has put government and education leaders at odds in Georgia and across the country over whether in-person, virtual, or some hybrid of the two is the best and safest choice for educating students this coming school year.

While this urgent debate has been settled in many districts, the resulting anxiety and confusion for students, parents and administrators compounds months of disruption, isolation and insecurity.

Kids do as well as the families and the societies they're in.

On Second Thought collaborated with American Public Media’s “Call to Mind” initiative, a national program to encourage new conversations about mental health, to put together a panel to discuss one central question: are Georgia schools prepared to support student mental health under these circumstances?

Dr. Erica Fener Sitkoff, executive director of Voices for Georgia's Children; Dr. Sarah Vinson, founder of the Lorio Psych Group and associate clinical professor of psychiatry and pediatrics at Morehouse School of Medicine; and Dr. Roy Reese, psychologist and director of Behavioral Health at Akoma Counseling and Consulting, joined On Second Thought to shed light on the pandemic's impact and discuss challenges, concerns and hopes for managing mental health as Georgia — and the nation — head back to school.

To find a list of mental health resources in Georgia, click here. If you or anyone you know is in distress and having thoughts of suicide, there are 24/7 resources to connect with trained counselors, including the National Suicide Prevention Line at 800-273-TALK (800-273-8255), or the Georgia Crisis & Access Line at 800-715-4225.

On how children are affected by their parents’ stressors

Vinson: Kids do as well as the families and the societies they're in, often. They're not separate entities and sometimes they can be the canary in the coal mine, where they may be more outwardly symptomatic, but when you look at the family stressors and the things that the family is going through, it may be that they're the one who is most overtly affected. But once you start asking questions, you find out that the whole family unit is stressed.

On the mental effects of the pandemic on children

Reese: We have seen a significant influx of patients presenting with increased anxiety symptoms and depression symptoms, and we're seeing this among young people. I think that one of the things that have happened is that as we were talking about the impact of COVID with respect to morbidity and mortality, that one of the morbidities that we've not paid close attention to is as it relates to mental illness. And a lot of young people are struggling now.

On the positive side, a number of these young people are reaching out to their parents and saying, "Hey, I need help." But unfortunately, we know that a number of other young people are struggling in silence. And so some of the things that we're seeing: we're seeing significant impairments in sleep. We're seeing disruptions in diet. We're seeing increased isolation, not just as a function of being isolated, but also as a function of the ways in which the anxiety and the depression is showing up in the lives of young people.

On the increased disconnect from educator to child

Sitkoff: We have had some individual reports from conversations we've had with some schools that have said upwards of 60 percent of their kids, they haven't had contact with, or regular contact with, since March. And if you see that as a leading indicator to what's happening across the state — and I think it is for many families who don't have reliable or any Internet access, or who are managing really overwhelming circumstances with regard to parental employment and lack of childcare — we're going to see a lot of that over the next month as schools reopen. And it's more critical than ever that we have an all-hands-on-deck approach to this, that we look at every state agency and all the resources in our communities, from after school programs to child care centers to pediatricians, that we really develop a community-wide collaboration to do well-checks on families.

On the importance of acknowledging what we don't yet know

Reese: I think that one of the things that we frankly have not done is to acknowledge what we don't know. None of us, in our lifetime, have experienced a pandemic of this magnitude, that's impacted us as broadly as this has. And so I think one of things that's important is to say, "We'll figure it out as we go."

I think people do well with information, even if that information is hard to digest. And so as people deal with the anxiety of, “How do I send my kid [to school]” — or, if I'm a kid, “How do I go to school, stay safe, get an education and manage the associated stress that goes along with that?" So I think it's important to acknowledge what we don't know, champion what we do know in terms of what we have confidence in, and say, "We're going to figure this out together, because we're all in this together."

Reese: We can't give school systems a pass on educating kids. I think it's important. This idea of, "Hey, let's just get past or get through the school year," — that's part of where this discussion around disparities starts. [...] There's been a lot of discussions talking about how kids are going to fall behind academically or how they've already fallen behind academically. And we know that has all kinds of implications for future orientation, the world of work, underemployment, under-education, etc. So we have to create a healthy, workable tension between the challenge that school systems are facing, and the demands that parents understand we should be making that their kids both be safe and get a quality education.

On resources for students to reconnect

Sitkoff: The Wellness Restart Work[ing] Group has gathered a number of resources of strategies that school districts are implementing. And they range from Wellness Fridays, to creating [a] button that kids can click on to reach the school counselor, to additional training of their teachers in order to do a check-in and check-out at the beginning of each class [...] and be able to recognize, flag and do individual follow-ups. There is a pretty wide range of different resources that school districts can tap into to support their teachers in supporting their children and families.

Sitkoff: This pandemic has magnified these gaps and fragility in our systems that have long existed, the disparities that have long existed in resources and opportunity. And broadband is just one of them. With regard to broadband, they are now publishing and bringing to light where those gaps exist. But it's going to take a tremendous amount of resources to really comprehensively think about what is needed to fully have equity and access, and broadband is a piece of it. But you also mentioned everybody having a device so that children are able to log in, versus getting dinged or having a punitive outcome because they hadn't logged in. So really thinking through all of the different aspects of supports that families need, and broadband being a very big piece of that — necessary, but not sufficient to fully meet the access demands.

On offering help with humility

Vinson: One of the things when it comes to helping communities that you may not be part of is respecting who knows that community, who has knowledge of it, and being humble in offering your help — not assuming that you know what people need or how they need it, but being really intentional about engaging. Who are the leaders? Who are the people in that community that folks already go to? And partnering with those people. And not going in thinking that you have your cape and you're going to go help this group of folks, but realizing that they already have shrinks; they already have resources. The best thing that you can do is try to support those things that are in place.

The other thing I'll say too, certainly to those who are in a position of leadership: sometimes we can get into this pattern of having our "Diversity Day" once a year, or our "Cultural Day" once a year. And really, when it comes to addressing these things that are so complex, a day of talks isn't really going to do it. It really has to be a matter of looking at how your school is serving certain segments. So, for instance, if you notice that no one from refugee or immigrant communities is engaging with your school counselors, then why is that? What do we need to do in terms of outreach? What is it about how we operate? Are people afraid of being reported to ICE if they come talk to us? Asking those questions about how you're set up, and how your system may actually be part of perpetuating those issues.

On caring for teachers as well as students

Vinson: So teachers teach, sure, but they're also human beings, and people cannot give what they do not have. And so if they don't feel a sense of power or a sense of agency, it's going to be really hard for them to reinforce that in the children that they're trying to teach and support through these really difficult times. I really do see teachers as an extension of that family unit we were talking about. When you think about the important adults in a child's life, especially those kids who are with that teacher all day in elementary school, that's a really significant adult for them.

And getting back to some of those equity issues that we raised earlier, we do know that bias plays a role in how kids are disciplined and to what degree they're disciplined. There are studies that show that when people aren't at their best, when they are stressed, they are more likely to sort of act on those biases whether it's intentional or not. In thinking about student health and mental well-being, we absolutely have to think about teachers, because they are part of that core group of people who the children are going to reflect off of.

In thinking about student health and mental well-being, we absolutely have to think about teachers, because they are part of that core group of people who the children are going to reflect off of.