Amid Disruptions And Upheavals, Author Bruce Feiler Reminds Us That 'Life Is In The Transitions' 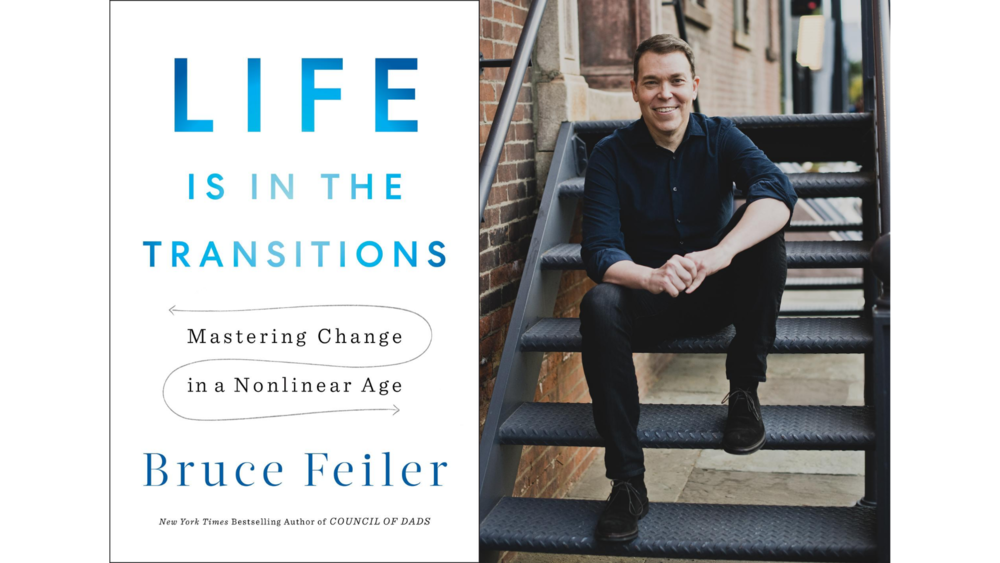 Bruce Feiler's latest book, "Life is in the Transitions," analyzes how hundreds of people across the country got through difficult life transitions, and what lessons we can learn from their experiences.

“When will life be normal again?” is perhaps the prevailing question of this unprecedented moment. In his new book, Bruce Feiler says disruptions and upheavals are the new normal – but we need new tools and skills to get through them.

Feiler is the author of six New York Times best-selling books, including The Council of Dads and Walking the Bible. On Second Thought host Virginia Prescott spoke with Feiler about his newest release, called Life is in the Transitions, for one of the Atlanta History Center’s virtual author talks.

Feiler started the project that became Life is in the Transitions a few years ago when experiencing a series of cascading crises, which he calls “life quakes.” Feiler was diagnosed with cancer as a 43-year-old new father, his family's real estate business was struggling financially, and his father attempted suicide.

"I'm the kind of person that when I go through this kind of experience, I want to seek out wisdom that other people have," Feiler said. "And there wasn't really a book that I could find that really, I felt, helped me with what I was dealing with. But I thought, there must be some wisdom out there."

Feiler collected stories across the country from hundreds of people who had confronted, and then overcome, life adversities. His book analyzes how they got through those massive upheavals in their lives, and finds that contemporary life involves more disruptions than expected. Feiler argues that the human brain is flexible, and that we can – and must – master the skill of transitions.

Through the book, Feiler hopes to help people understand how to tap into their resilience and persist through challenges.

“Whatever you're dealing with right now, I can almost assure you, I talked to somebody who had a lot worse and they got through it,” Feiler said. “And so can you.”

On the inspiration for the book

I got interested in this topic because I went through a "life quake" a few years ago. I was just kind of walloped by life, and not just one event, like over and over and over again. First, I got cancer as a 43-year-old new dad. Then my family's real estate business in Georgia was hit very hard by the recession. And then my dad in Savannah, who was suffering from Parkinson's, tried to take his own life. It was a kind of a scary, frightening – I mean, the way I think of it now is like, the conversations we were having were sort of “unhaveable."

And I'm the kind of person that when I go through this kind of experience, I want to seek out wisdom that other people have. And there wasn't really a book that I could find that really, I felt, helped me with what I was dealing with. But I thought, there must be some wisdom out there.

And so I set out on this journey. I ended up crisscrossing the country, collecting what became hundreds of life stories of Americans of all ages and all walks of life, people who lost homes, lost limbs, got sober, got out of bad marriages. [...] I assembled a team of 12 people. They were undergraduates and graduates, computer scientists and poets. We combed through these stories, digging out themes and patterns and then arguing about them and debating them, double checking the transcripts for what became the big idea in the book [...] which is: we all go through these disruptive life events and they lead to life transitions. What can I learn about life transitions from looking at all these conversations?

On how to cope with “life quakes”

The “life quakes” that we have in our lives can be involuntary, which is what we're doing now. Maybe we lost a job; maybe our spouse leaves us; maybe we had an accident or got a diagnosis. But the life quakes can also be voluntary. Maybe we choose to move; maybe we want to have children; maybe we want to start a new venture. So the “life quake," the blunt force of change, can be voluntary or involuntary. But the first step is that the life transition that comes out of it must be voluntary. You have to lean into the idea that you're going to go through this process of change and get yourself to a new place. You might feel one or two things. You might feel manic like I do, seventeen things at once. Or you might feel I'm in a fetal position, I'm stuck, and I can't do anything. But look at enough of these as I did – and hundreds and hundreds of conversations with people – and certain patterns begin to appear.

On how Feiler interprets historical events of 2020

I look at the protest movement and the pandemic as different. I see the pandemic as a collective involuntary "life quake." It's something that's happening to us. But I see the protest movement as a collective voluntary "life quake," because people are choosing to do it. [...] When I went into this, I assumed that how you deal with a medical "life quake" or a professional one, I would have thought that religion versus sexual identity versus work versus medical would be a different toolkit. I was just flat wrong. It turns out that the tools are the same.

On telling future generations your own stories

We know from research at Emory, Robyn Fivush does research into adolescent narrative right there in Atlanta. This is when children begin to tell a story about themselves. Robin and her colleague Marshall Duke did research back in 2001 in which they asked children 20 questions that I've since called the "do you know" test. "Do you know where your grandparents were born?" "Do you know an aunt and or an uncle who had an illness that they overcame?" "Do you know what was happening when your parents met, or when you were born?" And children who knew more about their family history, it was the number one predictor of a child's emotional well-being.

The number one question when I talk about this family story stuff is "What happens if the kids are adopted?" Well, it turns out that Marshall Duke has natural-born children and adopted children. And it's not passed on through the blood. These are stories that you tell.

So, the stories that you want to tell your children are the stories from their relatives, people that they know. "Grandpa was the first to come here. He worked very hard. He became the vice president of the bank. His house burned down. His daughter was the first woman in her generation to go to college. She got breast cancer." You want to tell them your own family's stories.

On the importance of vulnerability

Michelle Martin asked me, "Why do you put all this stuff [in your books]? You're writing about your stuff; on page one, you're talking about cancer. You're talking about family secrets." And I said, "Because I was asking other people to be vulnerable, and I can't ask them to be vulnerable without being vulnerable myself." And because I do not want to be part of any shame, of stigmatizing the stories of people that I talk to – people who were in cults, people who were in hate groups.

I want to have no part in shame. I want to break down the stigma. Because whatever you're dealing with right now, I can almost assure you, I talked to somebody who had it a lot worse and they got through it. And so can you.