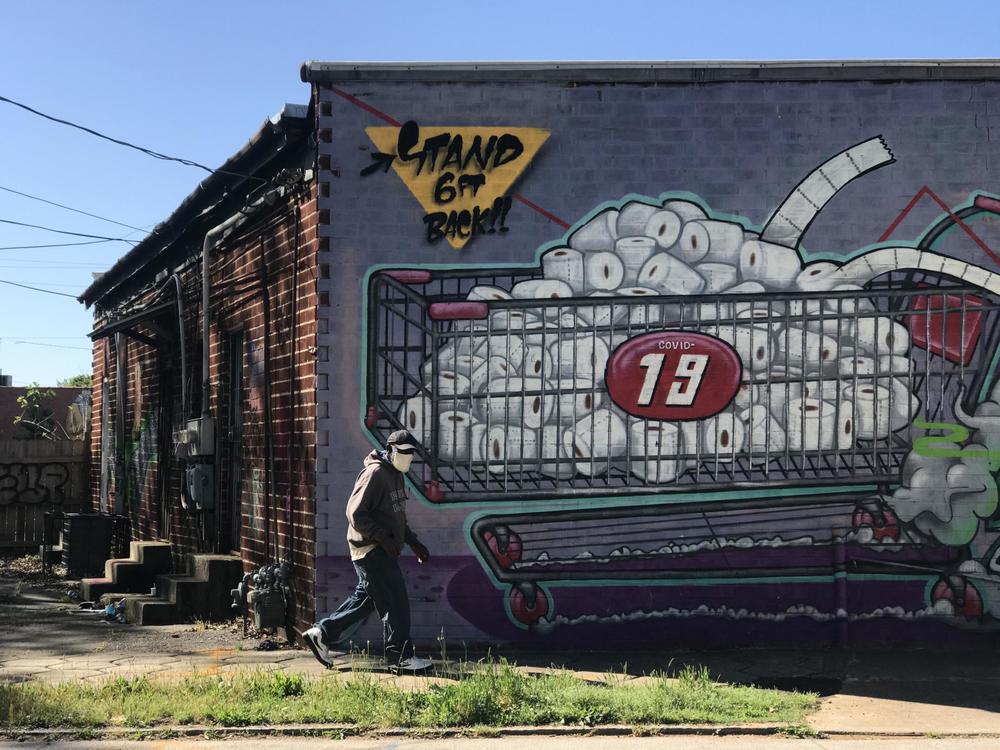 A mural in East Atlanta Village - aptly named "Sick With It" - depicts major themes of the coronavirus pandemic, including the rush to stock up on toilet paper. The artwork is by local residents and muralists Chris Wright and Matt Letrs.

Artists and arts organizations were quick to adapt to quarantine and coronavirus. Museum tours, operas, Broadway shows, author talks, home concerts and classes for kids sprung up online shortly after closures were announced.

But as the dust begins to settle on our new normal, many worry about the long-term economic impact and outlook for the artists, performers and independent organizations essential to the cultural ecosystem.

Doug Shipman, president and CEO of the Woodruff Arts Center, joined On Second Thought to share how the pandemic is affecting the arts world – economically, culturally and artistically.

Unsurprisingly, one of the major concerns is the financial stability of arts and culture organizations, big and small.

“It's been a huge economic loss,” Shipman said. “The industry across the entire region employs tens of thousands of people. And I think in many cases, 30, 40, 50% of folks may have been furloughed already simply because of the inability to operate.”

While federal loans and expanded funding may offset some economic losses in the short-term, Shipman says the uncertainty of when things could return to normal makes it impossible to predict the full economic effects.

“Really, I think the long-term impact and especially how patrons feel about coming back are really going to determine the depth of this crisis,” he said.

Shipman is just as, if not more, concerned about the artists themselves. That’s because their primary income sources – both the arts industry and the gig economy – have halted.

“I hope that those industries don't have a tangential impact on artists and cause them to not make as much work – or even leave their art-making,” he said.

Because, as he points out, a global pandemic like this could create a new period of art. Major themes that might crop up? Shipman predicts reflections on isolation, inequality, and mortality.

“Artists spend months, maybe even years with a work – perfecting it, grappling with it, usually with very big questions about life and society and mortality and humanity,” he explained. “Because this is what artists do.”

And there may be an increased hunger for the arts overall, caused by quarantine. Shipman noted that many people seem to be tapping into their creative side, whether that’s through traditional arts, like painting and writing, or through other pursuits, like gardening or cooking.

“I think that, in any sort of disruption, we revisit what it means to be human – and artistic expression is at the center of that,” Shipman said. “I think there will be a lasting effect in people wanting to create and be around creation.”

Well, there are a couple of different parts to that. One is, we actually knew, as we were closing down, that we might be closed for a while, so we were able to record some things that were happening right at the end of performances. Some of those performances were not only filmed, but filmed in a way that are very streamable. We've also opened up the archives. There is a lot of archival material that exists, but there's also been new material created – curators talking about works and such. But one of the interesting pieces of this is that there's been a real breakthrough. For a long time, contracts with actors, with producers, with musicians really didn't allow for streaming content very easily. And those have been opened up. I think everybody is understanding that we have to innovate in this time period. And that's been one of the innovations that's happened at the Woodruff Arts Center, in some of our agreements, but also nationally.

On whether audiences will return to arts organizations after the pandemic, if they get used to watching content online

I think the experience of a live show is much different or interacting with a live exhibition is much different than at home. I think we see this in entertainment. You can see almost any musical artist somewhere online, even in a live concert format. But people still flock to concerts because that energy is so acute. I think the bigger question for us is from a health standpoint, when people are going to feel comfortable being in the same room together and close together. I think that's the bigger question, not the one around whether or not they'll come back if they have the live streaming option. In fact, some studies have shown that the livestreaming option actually increases demand.

On the pandemic’s impact on artists

It's been devastating for artists. There was a survey that came out this week that said that two-thirds of artists have had a significant impact to their work, and 90% have lost income, whether it's galleries, performances or such. And for instance, actors get their health care as they work. They get credit through the actor’s union. So there's a huge impact on individual artists. Atlanta has had success in the last 10 years or so, keeping artists here in their mid-careers. I desperately hope that we can continue that, and I worry that artists may not be able to sustain themselves. The other piece of that is the gig economy is one that artists use to help augment themselves as they're doing new work or as they're in between gigs or in between jobs. If that part of the economy doesn't come back, especially restaurant servers and such, that's long been a place that artists work, you know, during the day so they can act at night or vice versa. I hope that those industries don't have a tangential impact on artists and cause them to not make as much work or even leave their art-making. That's my number one concern in this whole time period.

On how artists might respond to the pandemic in their work, over time

I definitely think there'll be responses – and I think the responses won't only be over the next few weeks or months, but I think this kind of situation usually creates a period of time, over a few years. I think there are a couple of things. One, this has been a very isolating experience for a lot of individuals, so I think there'll be some commentary on isolation. I think certainly inequality and its effects, its devastating effects, during this [will be] showcased in many ways. And frankly, how widespread the deaths associated with this are. If it is, you know, very extensive, and over a very long period of time, then I think it will also include memorials and reflections on mortality, like you would have in a postwar kind of situation. You know, it's interesting in being in my role for the last several years, I've been able to see artists up close. And the thing is, artists spend months, maybe even years with a work – perfecting it, grappling with it, usually with very big questions about life and society and mortality and humanity. Because this is what artists do. Even in times of non-pandemics, this is what artists think about and this is how the creative process works.

On how artists are responding to quarantine now, in real time

I see them really thinking about what it means to be able to be connected – and then the loss associated with not having that connection. So I see a lot of artists talking about that, reflecting on what they miss. Reflecting on the role of nature. I think one of the interesting things is that people have had to slow themselves down and become much more localized. You see artists sketching things that are near their homes on their daily walks, photographing things nearby – as opposed to, you know, having the ability to travel and do things elsewhere. So, I think that they're responding in real time to the stimulus that is occurring in an isolation kind of situation.