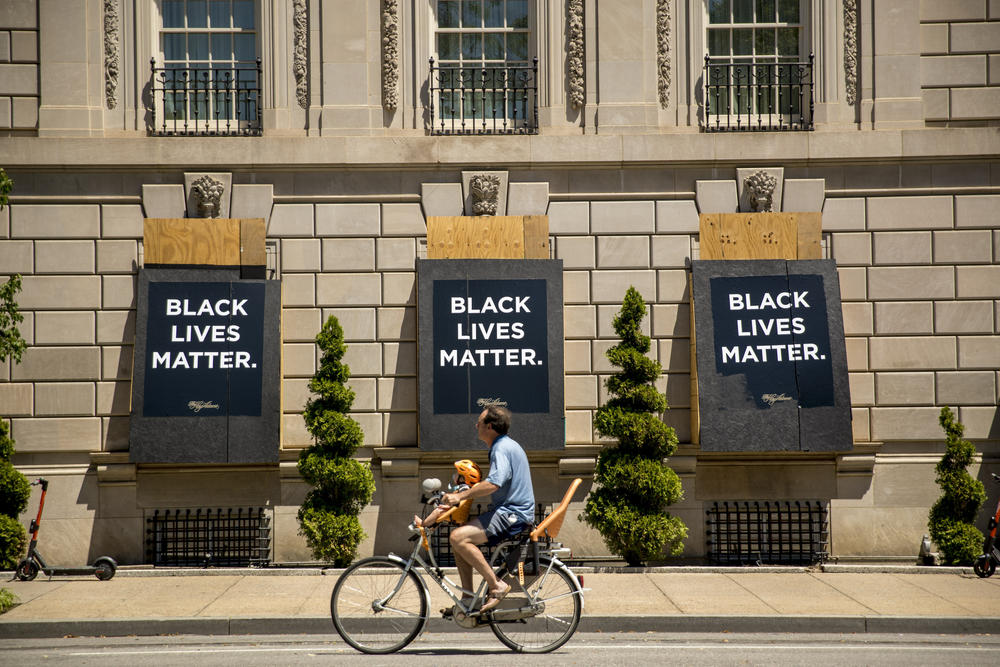 The words Black Lives Matter are painted on boarded up windows of the Hay Adams Hotel, a site of protests, near the White House in Washington.

While the deaths of Trayvon Martin, Michael Brown, Eric Garner, and Sandra Bland galvanized the #BlackLivesMatter movement, the killings of Rayshard Brooks, George Floyd, Breonna Taylor and Ahmaud Arbery have forced America to reckon with centuries of racial injustice and police brutality in unprecedented ways.

Not only have protests demanding change been widespread, but major corporations — which, until now, have been largely silent and hesitant to embrace Black Lives Matter — are pledging to fight racial injustice and declaring their support of the nearly seven-year-old movement.

On Second Thought hosted a conversation with Tracy Jan, a reporter from The Washington Post covering the intersection of race and the economy, along with Alexis Davis Smith, president and CEO of PRecise Communications, on the significance of those corporate responses — and the challenges some companies have faced as a result.

“It’s not just Black America who’s conscious of what’s going on; I think it’s all of America who’s finally, what we like to say, ‘woke,’” said Smith, noting how the short timeframe between viral videos of both Ahmaud Arbery and George Floyd’s killings served as a wake-up call to many Americans. “It’s incumbent upon companies to take a role, because they have the power, and the influence, and the resources to truly make a difference.”

Jan, who reported on the backlash many large companies faced after proclaiming their support of Black Lives Matter, noted that some consumers are not fully on board with the messaging coming from these brands.

“Even just three years ago when Colin Kaepernick was being blacklisted by the NFL for protesting this very same thing on a national stage every Sunday, a lot of corporations stayed on the sidelines,” Jan said. “The ones who did speak, most of them had given these very mealy-mouthed statements saying, ‘We support the First Amendment and free speech and the right of these players to protest. But we also support the flag.’”

Jan noted that some of the pushback has come from employees within the companies themselves.

“I’m very impressed by a lot of these young Black employees, workers at companies that have a ton to lose," she said. "They’re speaking out publicly, accusing their CEOs of fostering toxic work environments.”

Jan provided the example of Slack, which despite gaining a reputation of being a welcoming place for Black engineers, was recently criticized for not doing enough to value diversity within the company. Jan also cited how after L'Oreal released a statement encouraging people to speak out against injustice, their former model Munroe Bergdorf criticized the company, saying that she has been fired from L’Oreal for speaking up against white supremacy and racism after the white nationalist rally in Charlottesville.

However, Smith noted that other brands like Ben and Jerry’s and Nike have responded with bold and courageous statements that are aligned with how they’ve positioned themselves in the past. She also shed light on the pressure that all brands are under to make a statement.

“The African American community in particular — and now I’m going to say America — was looking for every brand that they support to make some kind of statement,” Smith said. “And what we have said to all of our clients in the blogs and communications we’ve shared is that: these statements are just the beginning. Because now you have really opened yourself up to be scrutinized.”

Smith said she’s recommending that companies “get to work” internally and take a close look at hiring practices, diversity of leadership boards, and the makeup of their executive teams.

“You cannot talk to external audiences about ‘standing with you, caring about you,’ if you’re not demonstrating that to the people that work for you and represent you on a daily basis,” she said.

Jan pointed out that as companies begin to look inwards, they should be careful not to place the burden of reform on Black employees.

“As one consultant told me, they’re expected to perform Blackness for their White leadership, and talk about how difficult it is to be Black in America,” she said. “But that’s not their role. And if that’s something they’re being asked to do, they should be compensated for it.”

Smith added that this is a time for leadership to pave the way for employees of all backgrounds and races.

“From what I’ve heard, not just from clients but even just my network, is that you have White colleagues that want to be allies,” she said. “This isn’t just a Black issue. You have people that are not Black who want to fix this, and they want to take a more active role. They just don’t have direction. And if you have the leadership to stand up and say, ‘We’re going to fix this issue,’ it’s going to happen.”

On how some have reacted to companies embracing #BlackLivesMatter

Jan: There is also a lot of skepticism about, fundamentally, this corporate rush to proclaim that Black Lives Matter. Skepticism both from within their own companies, from employees who have long been complaining about systemic discrimination, systemic racism when it comes to hiring, promotion, pay gaps — as well as the fact that even just three years ago when Colin Kaepernick was being blacklisted from the NFL for protesting this very same thing on a national stage every Sunday, a lot of corporations stayed on the sidelines. The ones who did speak, most of them had given these very mealy-mouthed statements saying, ‘We support the First Amendment and free speech and the right of these players to protest. But we also support the flag.’

Smith: We have seen companies who have made some tremendous impact in doing community programs and consumer outreach — all those things on the external basis. But it's great to take care of the outside, which there's still a lot more work that needs to be done, but you have to have your own house ready. And so while you're making statements, employees, consumers, stakeholders are absolutely right to say, "Hey, what about your board of directors? What about your senior leadership team? How many African Americans do you have in your C-suite? Even how many African Americans do you have on your communications, marketing and advertising teams?" Because if you had more people of color, you might not make some of these mistakes. And you may have been ahead of the curve as opposed to behind it.

On the difficulties of managing appearances after inaction

Smith: The companies that have not actively communicated to African American consumers, to come out with a message now looks a bit opportunistic. There's a little bit of a catch-22 for them, because in order to not say anything, then it looks like you don't care. But then if you do say something, then you're going to be challenged on, “Well, you've never said anything before.” So my counsel has been to the companies that have not been active in the space that they need to get to work. You can't talk about you care about — "We see you, we hear you, we stand with you" — if you haven't done the real work in the community. So that's the first thing. But I do think that there are companies that have walked the talk, like Ben and Jerry's, who have been very vocal about social justice. Definitely Nike; Nike was the very first statement that I saw, I think they were the first ones to roll out with one. And I was not surprised by that. They were very bold in standing next to Colin Kaepernick a few years ago. And they have not backed down. And that's what consumers want today. Millennials, they are not our previous generations. They are not playing, as we know, so I am hoping that this is a pivot into how companies execute their community relations programs, their PR, marketing, [and] advertising.

Jan: I wrote a story four years after Michael Brown was killed in Ferguson. And immediately after he was killed, all of these corporations rushed to make statements about how they're going to invest in the community. But what really happened was after the initial flurry of attention, the investments that were made in Ferguson did not go to southeast Ferguson, the neighborhood where Michael Brown was killed. It went to the whiter, wealthier parts of Ferguson, the downtown core, and the border of Ferguson with some of the bordering suburban communities, because that's where it was most easy to invest. If you went to Ferguson four years after the fact, a lot of the buildings that had been burnt to the ground during the protests were still burnt. 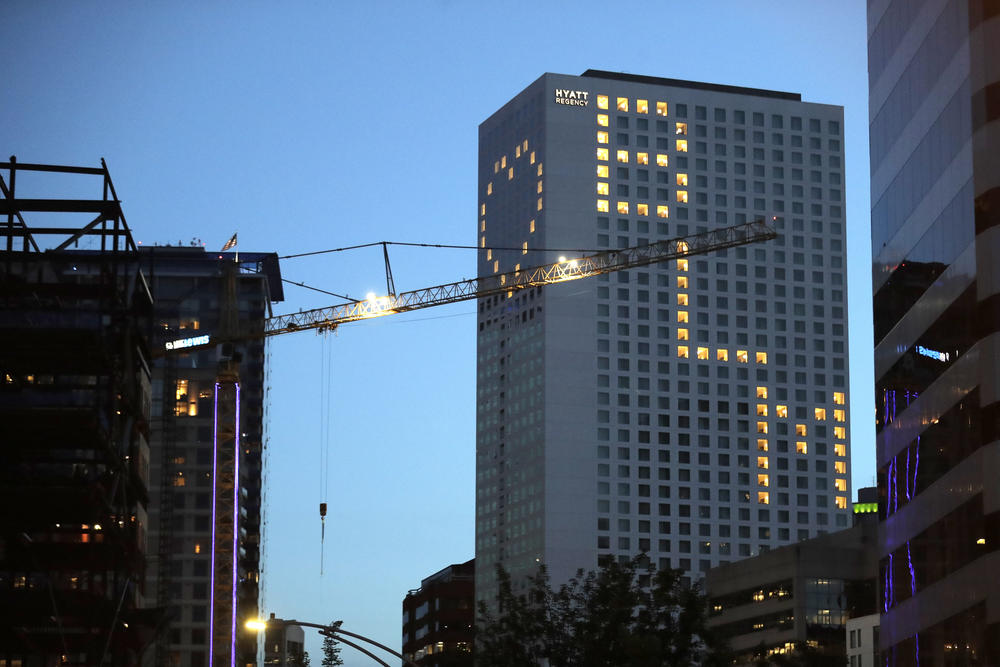