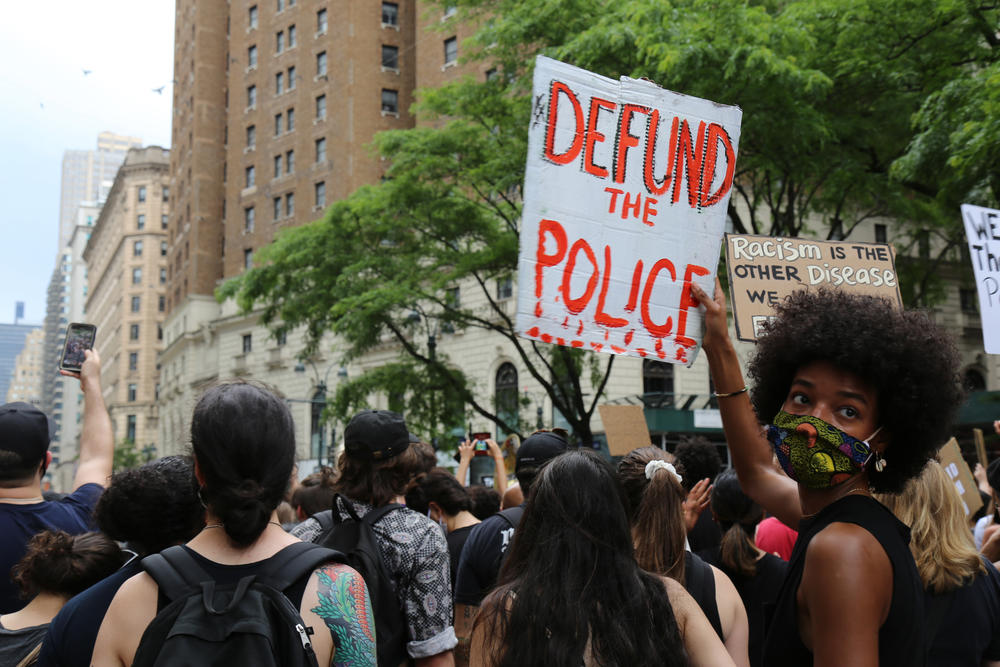 Protestors march in New York on June 6, 2020. Since George Floyd's killing, police departments have banned chokeholds, Confederate monuments have fallen and officers have been arrested and charged following a nationwide outcry against violence by police.+ / AP Photo

In the weeks since protests against police brutality began in Minneapolis, calls to reform, defund or abolish the police have been escalating. Demands for reform or cuts to police budgets aren’t new among activists, but a pledge by the Minneapolis City Council to “dismantle” the police department is unprecedented. The mayors of Los Angeles and New York City have also announced that they would both divert city funds from police departments to social service budgets.

Practically speaking, what would it mean to “defund” the police? On Second Thought sat down with Cedric Alexander, former police chief of DeKalb County, and Michael Leo Owens, associate professor of political science at Emory University, to dissect the history and meaning behind the language of the protest movement.

“The term ‘defunding’ can be very confusing right now,” Alexander said, noting that calls to defund departments often send a shiver down the spines of police chiefs and administrative staff alike.

However, Alexander said that defunding, provided the money is then reinvested into social service resources, has the potential to help police departments work better in the long run.

“If you’re going to take part of those police budgets to give to some type of public service, that means these officers don’t have to try to be everything to everybody,” he said. “By creating jobs and opportunities and education and mental health, as crime goes down, then I don’t have to ask for more money to hire police — because I won’t need as many police, theoretically.”

Owens noted that while the conversation around defunding police departments can seem extreme to some, starting the discussion there can push people to think about other less extreme kinds of reform they may never have considered before.

“We have had over a century of police reforms in the United States,” he said, citing the origins of the country’s policing in 17th century slave patrols. “But if the implementation of those reforms isn’t serious and respected and regarded by the police themselves, the reforms aren’t going to make a difference.”

Owens pointed out that even with the reforms being identified today — such as requiring the use of body cameras, eliminating no-knock policies, removing military-grade equipment from police forces, and expanding community policing efforts — agencies that already have most or all of those reforms in place still see instances of police violence against civilians.

Alexander suggested that one effective way to ensure police departments are behaving properly is to take a close look at the culture and hiring practices within the force. That includes the use of robust psychological evaluations to understand the motivations and ethics of an individual.

“What’s going on in policing, when you hear about this whole notion, ‘Well we all got a few bad guys.’ You do — and now the whole barrel is poisoned,” Alexander said. “If you’re in an environment and you sustain those few bad guys, that environment, that culture is complicit. […] We got to fix those dysfunctional cultures in policing.”

While evaluating implicit racial bias in the force is often top of mind, Owens added there are other kinds of psychological metrics that could be used to evaluate new members of the police force, including levels of social dominance and authoritarianism.

However, activists have stated that one of the biggest obstacles to reforming the police force has been the strength of police unions. Alexander noted that while unions may hold less bargaining power in Southern states compared to others across the country, they are still powerful forces with which management needs to negotiate strategically.

“Unions are there to protect the interest of their membership; they’re not there to build community relationships,” Alexander said. “A lot of the ability to discipline has been given up by management through negotiation. Either they [management] were poor negotiators, or they got politically caught up in unions, and they did favors for them as opposed to doing what was for the best interests of the people which they serve.”

Owens also addressed the challenges unions pose to reform efforts, and why it's necessary to shift towards more accountability to the broader public.

“Why is it that when the public says it would like to see a set of changes made, no deference is ever given to the public’s voice?” he said. “The idea of police being accountable to varieties of interests is something we need to take very, very seriously. There has to be some way for the public to not just have its voice heard, but for what’s said to be translated into new rules, new regulations that actually fit with the perspectives and wants and values and needs of communities, and the varied communities that are out there.”

Despite the roadblocks for successful reform, both Owens and Alexander believe this is a critical moment in history.

“This moment is so full of potential and hope,” Owens said. “I pray it is not wasted in any way, shape or form.”

“There needs to be police reform in this country. Period,” he said. “Very importantly, white people need to be involved in this conversation […] because all of this reform stuff we’re talking about, it all comes back to race.”

Alexander: I think what's really different for all of us is that all of us got to witness a murder happen right in front of us. It was tragic, it was horrific, and it was carried out by those who are supposed to protect and serve. And if we think about that image, which is very hard to get out of our minds, I think for this country that became a tipping point — another tipping point — in terms of: there must be change in our police agencies. Now, we also have to keep in mind that in recent weeks before Mr. Floyd's murder, we also had Ahmaud Arbery, and then Breonna Taylor, and then, if that was not enough, then you had the case in Central Park where a white woman used her white woman-ness to weaponize herself, to get a black man in trouble with the police. And that is also reminiscent of a history in this country, i.e. Emmett Till.

And then on May 25th, we saw the execution of Mr. Floyd, and how horrific that was for us to watch him die right in front of us. All that led up to where we are, at this very moment. So at this very moment, yes, we're going to see reform. As we speak, Congress is in session and the House Judiciary is hearing testimony around what needs to happen very different. All in all, we're going to see some federal changes as it relates to police reform. But the real reform, quite frankly, is going to be at the local level.

On the precedent for demanding police reform

Owens: We also need to be clear that we've had uniformed police in the United States for a very, very long time. Our first department is formed in Boston in 1838; you get Atlanta in 1873; we get DeKalb County in 1915. And from the start of having police in the United States, there have always been calls for reform of the police. Like within years of the formation of the first police departments, people were calling for reforms of the police departments, partly on the grounds of police violence against civilians. And so the contemporary conversation, unfortunately, is getting the full attention it deserves now. But, of course, it needed this full attention a long, long time ago.

On the push and pull between police unions and management

Alexander: Unions are there to protect the interests of their membership. They're not there to build community relationships. [...] For me as management, doing periods of negotiation, it's almost like horse trading. What am I going to give up in management to give to unions? A lot of the ability to discipline has been given up by management through negotiation. Either they were poor negotiators or they got politically caught up in unions, and they did favors for them as opposed to doing what was for the best interests of the people in which they serve. So I'm not going to let management off the hook of this.

On public accountability and policing

Owens: What about the idea of civilian or democratic accountability? And why is it that when the public says it would like to see a set of changes made, no deference is ever given to the public's voice? Deference is always made to the voice of the officer.

Now, it could be because we say, "Well, the officers know best, because they're doing the work day in and day out. So of course, they know more than I do." But if you look at how police describe their day to day work, a lot of it is what we refer to as ‘administrative policing’. It's not every day when they go on the job, they're encountering really bad people. And so the idea of the police being accountable to varieties of interests is something that we need to take very, very seriously. And again, there has to be some way for the public to not just have its voice heard, but for what's said to be translated into new rules, new regulations that actually fit with the perspectives and wants and values and needs of communities and the very communities that are out there.

On the “few bad apples” argument

Alexander: What's going on in policing when you hear about this whole notion, "Well, we all got a few bad guys." You do — and now the whole barrel is poisoned. Because if you're in an environment and you sustain those few bad guys, that environment, that culture is complicit to that behavior. So we have to take a far greater responsibility from the top of that organization down to the last person hired. [...] For years, we have been talking about reform and nothing changes. But I think and I hope we're at a place that we can make some significant change in our environment by doing these things that I'm suggesting, that [Owens is] suggesting, because that's where the real change is, just talking about it, making one or two tweaks here is not going to do it. We got to fix those dysfunctional cultures in policing.