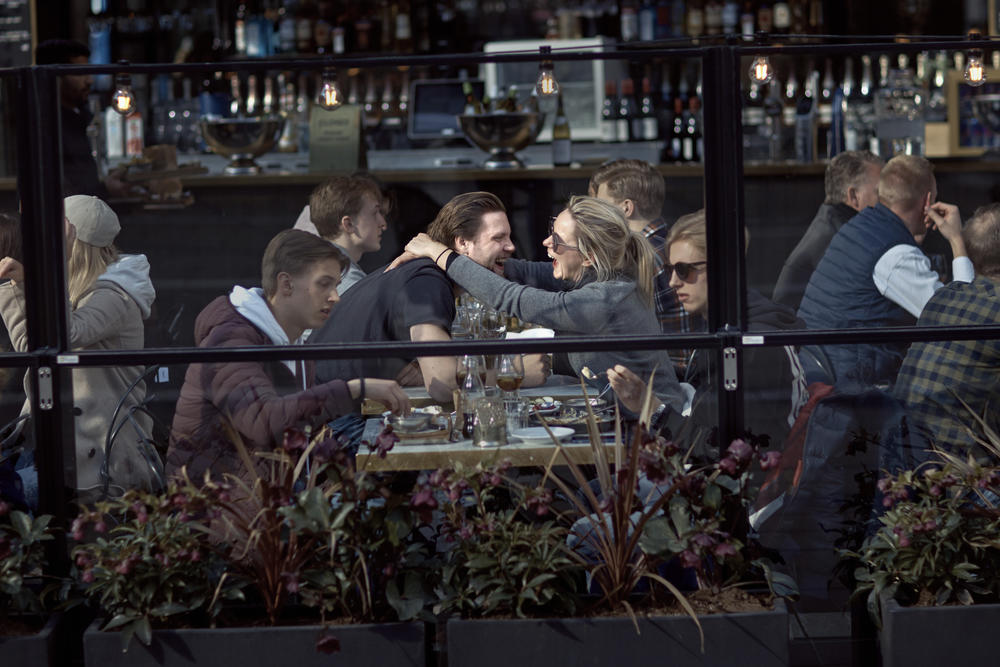 A couple hugs and laughs as they have lunch in a restaurant in Stockholm, Sweden. This photo, taken Apr. 4, 2020, illustrates Sweden's relatively relaxed response to coronavirus, in contrast with the lockdown approach taken by many other countries. / AP

Compared to the lockdowns and shuttered businesses in countries across the world, Sweden is an outlier. Swedish officials have advised citizens to work from home and avoid travel, but most schools and businesses have remained open.

This relaxed approach aims to minimize impact on the economy and slow the spread of the virus through what is known as “herd immunity.” But striving for herd immunity without a controlled vaccine in place can also prove risky.

Now, as the U.S. weighs further spreading the disease against the impact of a tanked economy, some Americans — particularly conservatives — are looking toward Sweden’s model as an option. Tina Nguyen, White House reporter for Politico, says that it’s an attractive approach because it would help get the economy back in gear.

“Conservatives have primarily been focused on making sure the economy stays healthy, and for fairly good reason,” she explained. “We've just hit maybe about 30 million people filing for unemployment in the past several weeks alone, which is the highest since the Great Depression. So, looking at Sweden as an exemplar of that, they're like, ‘Hey, look, here's a country that's trying to make it work. And sure, their economy is contracting, but it's going to be at a higher level of economic functioning than the rest of the world if a vaccine doesn’t come for a year, two years.’”

Nguyen joined On Second Thought, along with Dr. Felipe Lobelo of Emory University’s Rollins School of Public Health, to unpack the merits, risks and overall strategy behind Sweden’s approach.

Dr. Lobelo, who is a professor of global health, says that Sweden’s approach could have mixed results. The country has seen a higher mortality rate than other, comparable Nordic countries like Norway and Finland. However, since a higher proportion of the population has already been infected in Sweden, the country may be able to achieve herd immunity faster than other countries.

“We are still learning about this new virus – the biology of the virus, the transmissibility in different groups of populations, also the mortality and the different clinical manifestations of the virus. So clearly, we don't know everything that we need to know,” Dr. Lobelo explained. “And this is a big risk that Sweden has taken, and they’ve acknowledged that. Because they, for example, have failed to contain outbreaks around [their] elderly population; more than 80% of their deaths come from nursing homes. So, you know, all these approaches have risk inherent with them because this is a new virus.”

Nguyen’s article for Politico, “Conservative Americans see coronavirus hope in progressive Sweden,” also suggests that there are some significant differences between Sweden and the U.S., which could affect implementation and results. One such example is how Sweden has a lower population and population density, which may help slow the spread of the virus on its own.

“Swedes are far more compliant with the suggestion to socially distance than the United States, primarily because they have a higher degree of trust in their government and their public officials,” Nguyen said.

Dr. Lobelo notes that, beyond cultural differences, the United States also has more diverse and extensive health concerns than Sweden. Higher rates of obesity, hypertension, and other pre-existing health conditions – which are risk factors for coronavirus – could make American populations more vulnerable. Another concern is that the U.S. has higher rates of income inequality and poverty.

“Social determinants of health are drivers, really, of the outcomes, because you can start to see that vulnerable populations – populations of color, African-Americans, Latinos – are shouldering a much bigger burden of disease, with coronavirus, compared to white populations,” Dr. Lobelo explained. “And that is partially explained by disparities in income, in education, in access to healthcare, and the ability to self-isolate or to work from home versus being an essential worker. So all those factors, in addition to the biology of the virus, are driving the outcomes that we’re seeing.”

Still, as the crisis continues, the open-economy approach may become more attractive to Americans, even across political lines.

“It will be interesting to see how states that are swing states react to coronavirus,” Nguyen mused. “But you might also see Democrats take that approach as well, because, look, New York and New York City in particular is packed way denser than, say, South Dakota. If you isolate successfully in [less dense] states, that's one thing. It makes more sense to lock down New York City. So, we’ll see exactly how that plays out.”

So which approach – continued lockdowns or opening economies back up – is better? Nguyen spoke with public policy experts who have worked for conservative-leaning think tanks for her article, and they indicated that, unfortunately, we just won’t know until the crisis is behind us.

“One person mentioned that Sweden is making a giant gamble,” she said. “And if a vaccine pops up sooner, then they're going to look like heartless monsters who tried to keep the economy afloat at the expense of their elderly. If the vaccine takes about one or two years to develop, they're going to look like they saw the future and prepared accordingly for it. So really, you're not going to see any sort of firm, definitive, ‘We should have done this’ versus ‘We shouldn't have done this’ until it is clearly over.”

On what “herd immunity” means

Dr. Lobelo: Herd immunity is a percentage of the population that has been infected with a virus or an infectious agent or that has been vaccinated. And because of a proportion of the population that is immune, then the transmission of an infectious disease or an agent or virus, in this case, is going to slow or even stop completely because, you know, the virus essentially runs out of hosts to infect. It has to do with how transmissible is a virus, and we know that for this new coronavirus, probably 60 or 70 percent is required for us to achieve herd immunity.

On the appeal of Sweden's response to coronavirus

Nguyen: Conservatives have primarily been focused on making sure the economy stays healthy and for fairly good reason. We've just hit maybe about 30 million people filing for unemployment in the past several weeks alone, which is the highest since the Great Depression, I believe. And recently, Politico and a couple other news outlets have reported that the temporary furloughs that companies have put in place to cut back on costs have now become permanent. So you're looking at a massive economic disaster if this continues, however, conservatives believe that the approach to making sure that people don't fall into economic despair is let's get people back to work. Let's start trying to reopen businesses. Let's make sure life goes back to normal as quickly as possible. So looking at Sweden as an exemplar of that, they're like, hey, look, here's a country that's trying to make it work. And sure, their economy is contracting, but it's going to be at a higher level of economic functioning than the rest of the world. If that doesn't come for a year, two years, that kind of thing.

On key differences between Sweden and the United States

Nguyen: Sweden has a way smaller population than the United States. It's about 10 million people, whereas New York, you've got 8 million people crammed into about 230 square miles. That density definitely sped up the transmission and the death toll of the coronavirus in the state of New York. So that's one consideration. The other one is that Swedes are far more compliant with the suggestion to socially distance than the United States is, primarily because they have a higher degree of trust in their government and their public officials. There are polls out there that say that Sweden has one of the highest rate of trust in their governments in the world, maybe about 77%. And the U.S., I don't remember off the top of my head, is considerably lower than that.

Comparing the overall health of Swedish and American populations

Dr. Lobelo: We know from previous data that Sweden, compared to the United States, is a healthier country. We have much higher prevalence of obesity, diabetes, heart disease, physical inactivity, [and] bad diet compared to Sweden and other Scandinavian countries. And that may explain why, in the U.S., we have to take stronger lockdown measures because we have a more vulnerable population.

On Georgia’s future following a reopening

Dr. Lobelo: Every aspect of healthcare and public health is local. So, it's hard to make a prediction about how the state will fare. If we look at the state, we've been relatively doing okay in terms of the percentage of ICU beds, for example, that are being used statewide. But when you drill down into particular communities like Albany or like some areas of northeast Georgia, we do see an overrun in the capacity of health care systems because outbreaks are localized and they don't all happen at the same time. So we do expect a resurgence in the number of infected and the number of hospitalized. How big of that peak is really going to depend on how much mobility the population decides to take. So it's hard to know how this is going to affect whether the health care system in Georgia is fully going to cope.