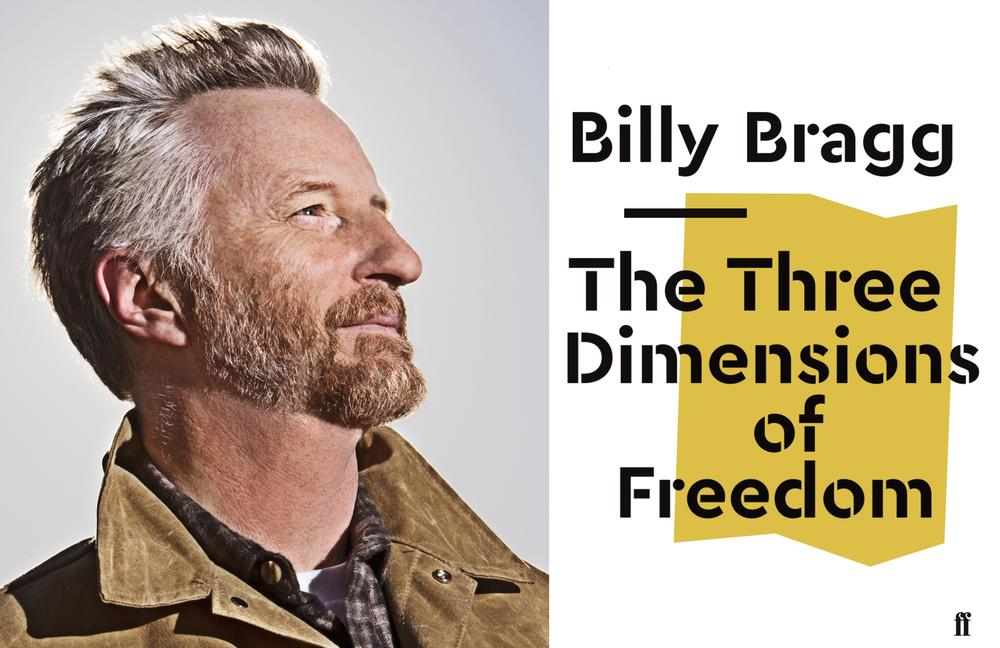 Singer-songwriter, activist, and author Billy Bragg is out with a new work: a political pamphlet titled "The Three Dimensions of Freedom."

Billy Bragg is many things: a poet, punk rocker, folk musician, and singer-songwriter. He’s also an activist, music historian, and best-selling author. In the words of another poet, he contains multitudes.

Bragg’s newest work, The Three Dimensions of Freedom, is a slim volume that makes a weighty argument. It’s a pamphlet in the tradition of Thomas Paine, whose influential polemics helped spark the American Revolution, and later got him convicted of sedition.

This new polemic from Bragg takes a match to a contemporary powder keg – free speech – and advocates for more accountability in the public realm.

Bragg joined On Second Thought to discuss how he posits that liberty, equality and accountability are crucial elements of freedom.

“Very often the loudest voice wins,” he said. “And I don't think that that's helpful for actually having a free society.”

Bragg says that the lack of accountability in our society only adds to the challenges presented by politically charged discourse, abuse and bullying, and a culture that dismisses differing points of view. This problematic dynamic becomes even more apparent online, where the line between public and private behaviors become blurred.

“The Internet has no constitution,” he said. “What I'm trying to put out there with my book is an idea for some parameters – not as the answer to our problems, but to try and find the space where our partisan politics doesn't infect the discussions that we really should be having.”

And the singer-songwriter suggests that, while music used to be a more powerful tool in communication and calling people to action, those conversations generally happen on social media these days. Still, Bragg finds that music continues to convey something deeper.

“The currency of music is empathy. It has the ability to make you feel for the plight of other people,” he explained. “You know, someone else might be in a political situation or, more likely, they're in an emotional situation. And you are either seeing yourself in that situation thinking how you'd feel, or you've experienced that situation and they're helping you to reflect on that. That empathy, I think, is absolutely key to what the power of music is.”

Bragg will talk about The Three Dimensions of Freedom with Atlanta music journalist Chad Radford in a Zoom event on Wednesday, May 6 at 6 p.m. The event, hosted by A Cappella Books, will also touch on Bragg’s music, career and his 2017 book, Roots, Radicals and Rockers: How Skiffle Changed the World.

On how equality and accountability are crucial elements of free speech

Very often the loudest voice wins. And I don't think that's helpful for actually having a free society, because you have to really have not just freedom of speech – everybody has that right, obviously the right to express an opinion. That's a fundamental bedrock of freedom. But it has to be accompanied with equality, the recognition that everybody has the right to express their view. And very often you don't get that. People don't want to be contradicted. They don't want to hear the other person's opinion. But even that alone, just liberty and equality, is not enough. That's just a recipe for an argument. You really need something that draws a parameter around the argument. And I think that has to be the dimension of accountability. You have to express your opinion; you have to respect the rights of others. But both you and the person you're talking to have to accept that you have to take responsibility for the things that you say and that you do. And if we can have those three together, it sets up a space where we can have a discourse in which everyone is respected, everyone's opinion is heard. It's not about stopping a particular opinion. It's about ensuring that everybody gets to express their views. Everybody gets to speak in a way where they're not abused and not bullied. But fundamentally, we respect one another and what each other has to say.

The partisan politics that you have in your country makes it very difficult for people to communicate with one another. And people are too willing to dismiss the argument of the other person by using phrases such as “political correctness” or accusing people of being "woke." That's a trope used by reactionaries to police the limits of social change. And it's a way of shutting people down. The equivalent from the left is to accuse someone of being a fascist or a racist or something without actually dealing with the point that they're making. Sure, there are racists out there; there are definitely fascists out there as well. Not every person that we encounter who disagrees with us fits easily into those boxes. So by respecting the opinion of the other person, by respecting their right – and then that person reciprocating with your right – have a civil discourse with them in which in the end of it, you might both learn something. But what we're trying to do really is create that space where everyone is respected and where reasonable argument and reasonable disagreement and offensive argument as well – as it's not about stopping people making offensive remarks, but there is a limit. And I think that limit is abusive language. And I think that's where accountability comes in. If people are making abusive comments online, then we have to find a way to hold them to account for that.

On how civil discourse, even when disagreeing, can allow for learning and understanding

Sometimes I'm having a huge disagreement with someone online, but because we are being civil with one another, I'd like to think we're both learning something. I'm certainly learning something because by hearing the other side of the argument, it allows me to have a different perspective on where they're coming from. Take, for instance, the reopening of shops in Georgia. You think to yourself, “That's crazy – we couldn't do that here; it's not possible.” But I read an article today in the New York Times [about] a woman opening her nail salon explaining the economic necessity for that. […] So, it was very helpful to me to understand a little bit more what's behind the urge for people to want to go back to work. I totally understand that, and I respect completely the point of view which she was coming from. You know, because both she and both I are doing everything they can to ensure people's safety. And we're all of us, wherever we are, trying to make sense of the situation we find ourselves in and how we might get out of it.

On the role of music as a vessel for empathy

In the 20th century, music was the only social medium available to young people. Music has kind of lost its vanguard role. […] I think whether you're a political songwriter or a love songwriter or any kind of songwriter, the currency of music is empathy. It has the ability to make you feel for the plight of other people. Someone else might be in a political situation or, more likely, they're in an emotional situation. And you are either seeing yourself in that situation thinking how you'd feel or you've experienced that situation, and they're helping you to reflect on that. That empathy, I think, is absolutely key to what the power of music is. Particularly today, when there seems to be a war on empathy. You know, anyone who expresses any fellow feeling for someone, particularly [for] people outside their perceived group, they're immediately dismissed as "virtue signaling" – as if, you know, this is some kind of bad thing – or being called "woke." Whereas really empathy is what music is all about. 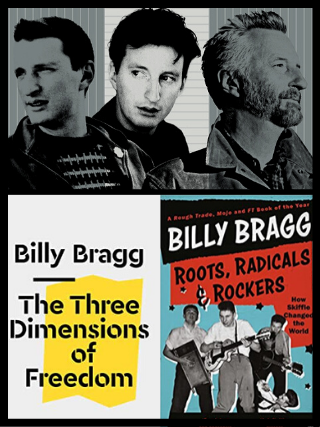 A Cappella Books will host a virtual author talk with Billy Bragg on May 6, in which he'll discuss his music, career, and his two most recent books.