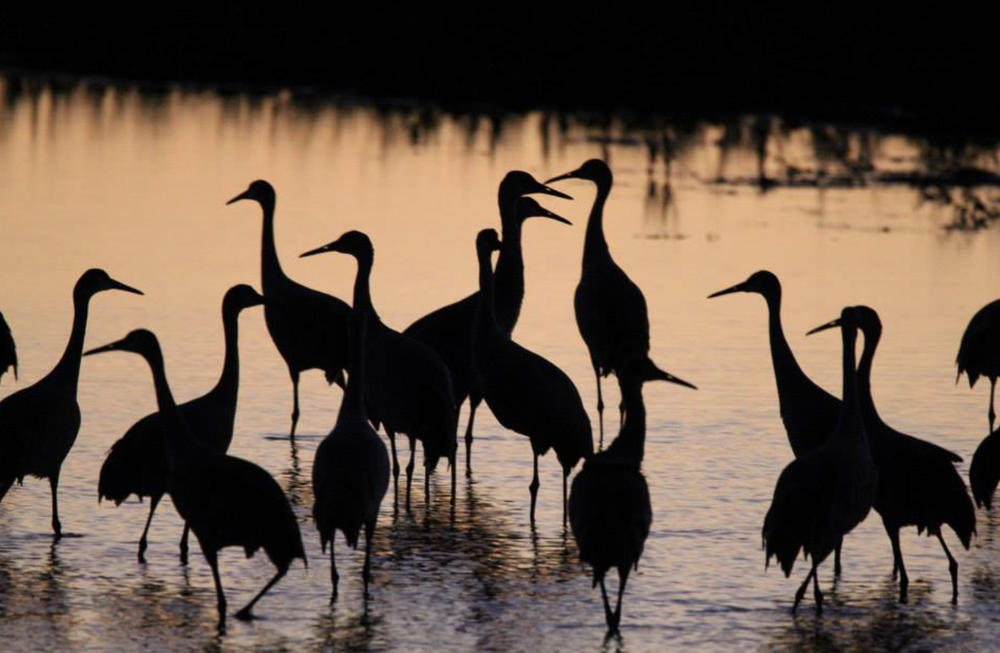 When Ben Thompson was a kid, he was like a lot of other kids in that he liked watching the nature shows on public television.

“And they would show specials every once in a while about the wildebeest migration in Africa or, you know, Caribou or reindeer in Alaska, and those were great migrations,” Thompson said. “You know, I may never go to those places I can see the great migration in my backyard.”

For a kid growing up in Perry, Georgia, the backyard meant a patchwork of cotton and peanut fields, wetlands and patchy woods that characterize middle Georgia farmland. As for his great migration, he meant the Sandhill Crane.

One Of Earth's Great Migrations, On View In Georgia Farmland

Except for a resident population in south Florida, the Sandhill Crane spends summers in the upper midwest and Canada and winters in the southern third of the United States. A part of that range takes in the farmland around Macon County, Georgia where Ben Thompson agreed to be my guide.

Ben Thompson is a retired high school science teacher. Today he is president of the middle Georgia chapter of the Audobon Society, the Ocmulgee Audobon Society. I met him in the parking lot of the Perry Cracker Barrel a little after 7 a.m. one day in January because I really wanted to make a photo of a sandhill crane. It turned out Thompson had beaten me to it, many times over. He showed me the pictures on a laptop in his truck. It's his photos that illustrate this story, in fact.

The photo showed the slate gray, red crowned, nearly 5-foot-tall crane in a variety of poses. Like, somewhat improbably, in flight, or interacting in big groups in what looked like a dance. And knee deep in water, often in wetland areas that only fill up in the winter.

“So, you know, they like they to roost like in standing water up to to their knees so they can hear predators approaching,” Thompson explained.

Until recently the seasonal ponds cranes roost in enjoyed the same government protection as rivers and standing swamps. That ended last month when the Trump administration finally rolled back an Obama era regulation called Waters of the U.S., in part because farmers had complained of how the rule constrained their land use.

We passed a lot of farms as we head out to look for the cranes.

“A lot of the farmers, you can't blame them, are draining, the areas that hold water,” Thompson said as we drove out to the area he knew to find the birds. “You know, they want to make as much money as they can.”

And farmers make money by farming. On the other hand, Thompson explained that cranes really love gorging on the peanuts that farm machinery leaves in the field during harvest season.

Cranes could face another challenge. The Trump administration also recently ended penalties for big industry and farmers when they accidentally kill migratory birds.

Since I got us to a late start, the cranes were already in the air when we got near the spot Thompson knew was a roost. As we drove, he pointed out a chevron of birds in the air.

“There's a group going out to feed right there in the sky,” Thompson said, peering through the windshield of his truck.

They were spreading out across farmland looking for food. We stopped where three or four Vs of birds just flew across the top of a copse of trees. Their call was like a high pitched gargling, impossible to miss even as they called from the sky.

“That call is unmistakable. You know, only one thing in the world that makes that noise,” Thompson said. “Yeah, we've seen several hundred pass over this morning. But in this area, you know, there are a couple thousand. Which is a decrease from eight or 10 years ago when there are as many as 8,000.”

Some birds are likely staying farther north this winter compared to a decade ago. According to data from the National Audobon Society, climate change is pushing the crane’s winter range further north every year.

We chased more birds to more fields, but it took a while to get close enough for me to snap a few frames with a long lens I borrowed from a friend. So, mission accomplished. And while my picture was nothing like Ben Thompson’s, I was grateful to have had the chance to see these Sandhill Cranes before they left in the spring, hopefully to return again at the end of the year. 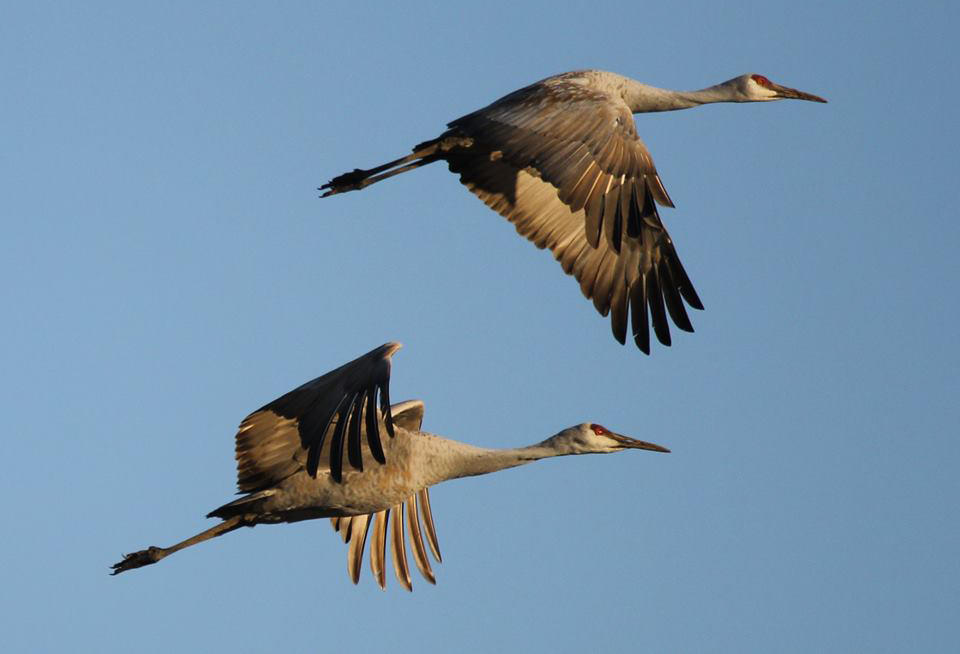 A pair of Sandhill cranes in flight. 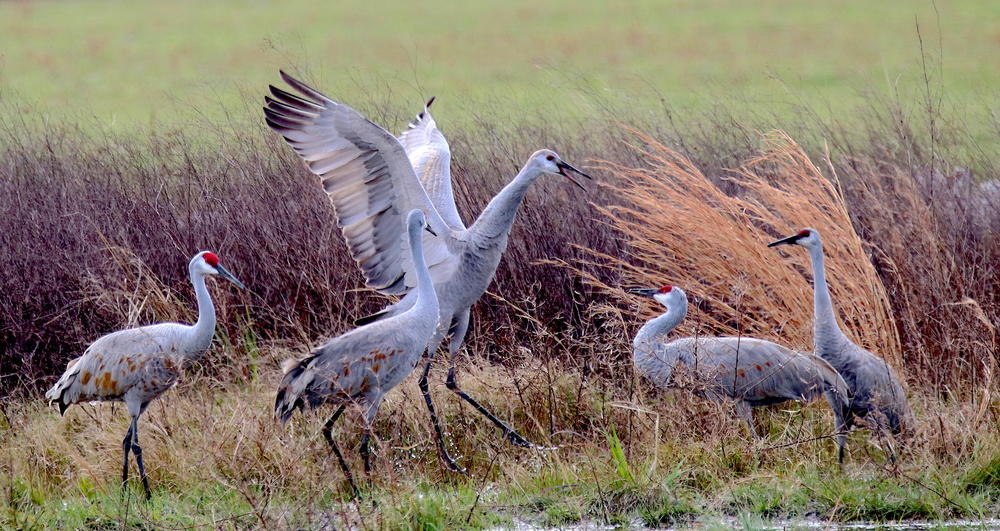 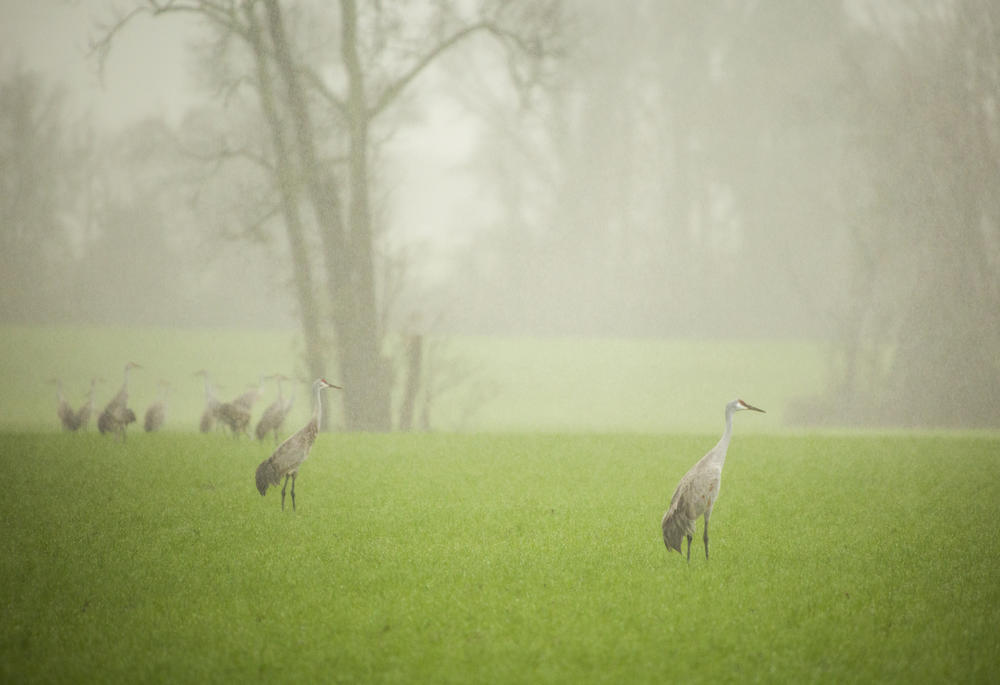 Tags: wetlands  Waters of the US  sandhill cranes  Columbus  environment