How Bowling Alleys, Restaurants Choose Whether To Reopen In Georgia 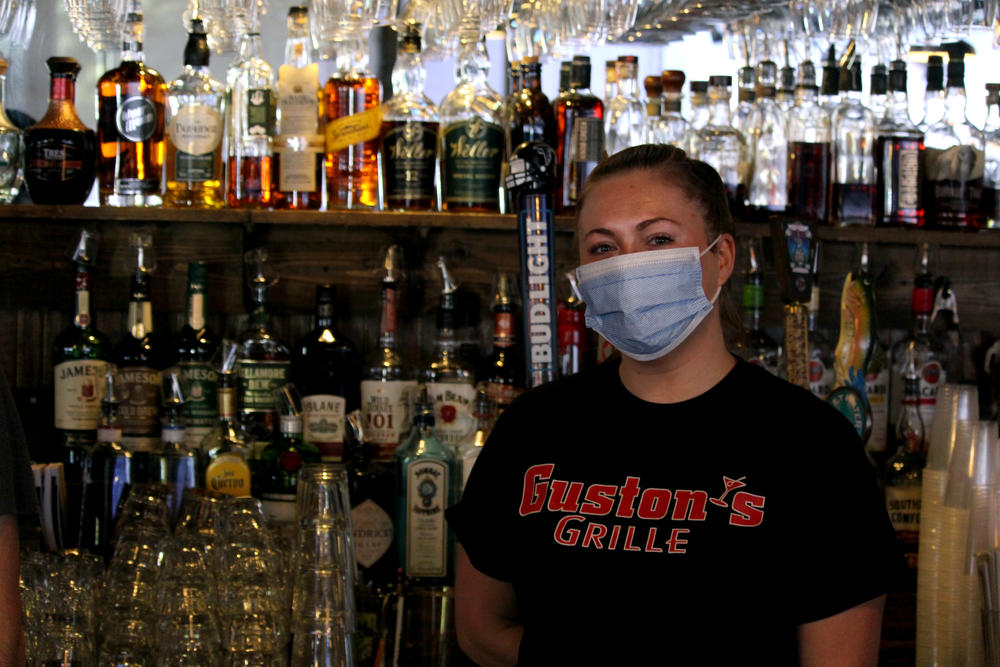 Local restaurants and bowling alleys in Georgia are either celebrating a reopening Monday or letting customers know why they've chosen to stay temporarily closed now that Gov. Brian Kemp has allowed these businesses to move forward.

Before Monday, customers could support local food establishments via take-out only. That scared people like Ashley Mackay, a longtime bartender at Guston's Bar and Grille in Woodstock. At 3 p.m., she and fellow staff members propped open the front doors and welcomed regulars back to the bar.

Doug, who didn't give his last name, said he thinks the lockdown was hurting the local economy more than the threat posed by the coronavirus. He and another man, who attends college in Georgia, sat at the bar drinking beer.

His friend, Carl, arrived 15 minutes after doors opened and took the seat around the corner from Doug’s friend.

But even with the all-clear from Kemp, some bowling alleys aren't rushing to re-open their lanes.

Mike Syass, who works at Midtown Bowl in Atlanta, said there's still a lot to consider.

"We're discussing all the things we think about," he said. "PPE for everyone on staff. How are we going to deal with shoes? How much contact do you want with the customer? How do we get around having to sign receipts?"

Syass said they don't anticipate opening within the next week, or even longer, because of the lingering questions around the spread of COVID-19.

"We're going to defer to the science on this one," he said.

Comet Pub and Lanes in Decatur and Stars and Strikes in Woodstock are also staying shut. While they didn't mention a specific time frame for reopening, they said they look forward to opening "as soon as possible."

"We are making great progress on both fronts, but are not ready to open our facilities and meet all required standards at this time," the alley wrote on its Facebook page.

Bowlero in Kennesaw, however, has decided to open their doors — albeit under limited hours. They've also implemented new procedures in an attempt to follow the Centers for Disease Control and Prevention's social distancing guidelines.

The bowling alley limited lanes to 4 to 6 people, removed furniture to allow for more social distancing, and put an empty lane between each set of bowlers. They also implemented new sanitation procedures.

A long list of health and safety precautions including cleaning and wearing masks must be met before a food establishment can resume indoor service. Salad bars, buffets and self-service condiment stations are prohibited.

At Guston's, the bar and dining room are open, but open mic night isn't coming back quite yet. The destination for song and dance closes the kitchen at 8:30 p.m. (though the bar stays open until midnight).

Freddy Shelby, who manages the open mic guest list, said he's staying in contact with the owners and waiting until it's safe to restart live music.

"I tend to err on the side of caution because I live with my mom who is 86 years young," Reed said.

Mackay takes her job seriously. She's worked for Guston's since 2009 and has been nervous about the possibility of the place closing for good.

Guston's won't let more than about 50 people inside at a time, and they're only handing out paper menus. But guests "can eat on a real plate," she said on Facebook.

Many of the people celebrating Guston's reopening Monday longed for a sense of normalcy, including Woodstock resident John Little, who said his friends call him "the mayor."

"I'm of that viewpoint that the cure will be worse than the disease if we don't re-open the country, meaning there will be more harm done by the shutdown than the virus," Little said. "I think as long as Guston's, and anyone else who opens, does the right precautions, then let's get on with life."

Syass said he understands why some businesses are making the decision to reopen, but he stands by his company's decision to wait.

"Everybody has to know their customer," he said. "But it's a matter of what are you doing to protect your customers and your staff?" 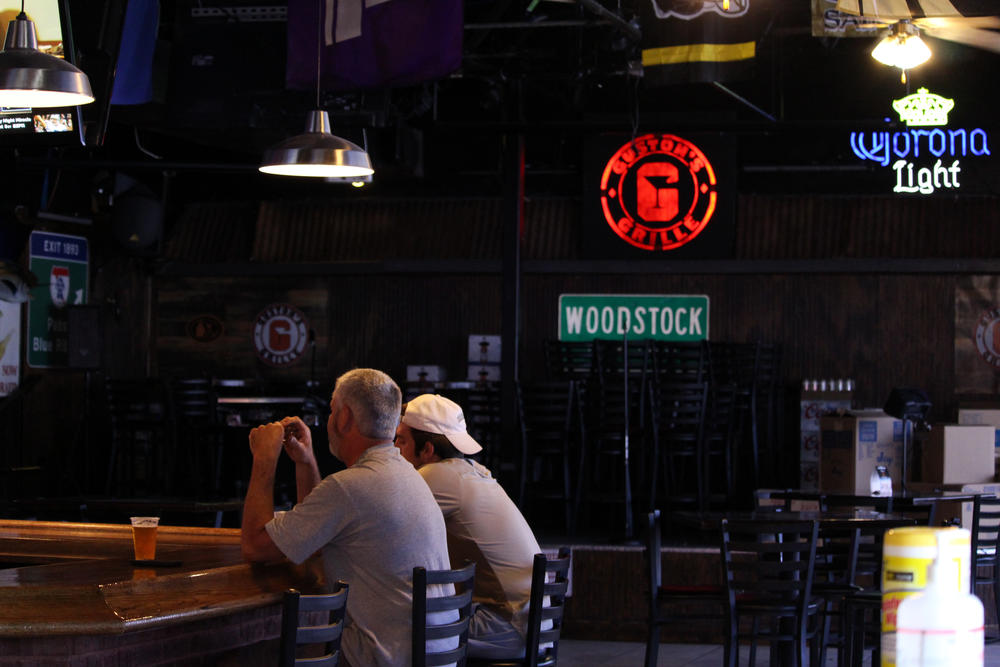 Caption
Doug (left) sits with his son at the Guston's Bar and Grille bar in Woodstock on the first days customers are allowed to dine indoors after some lockdown restrictions were lifted by Gov. Brian Kemp. 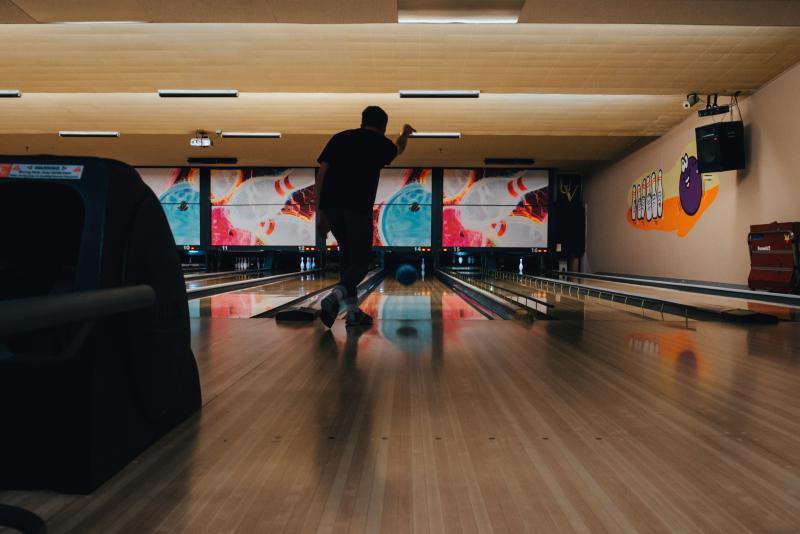 Caption
Bowling alleys are permitted to open as of Monday, April 27, but many in Georgia are staying shut. 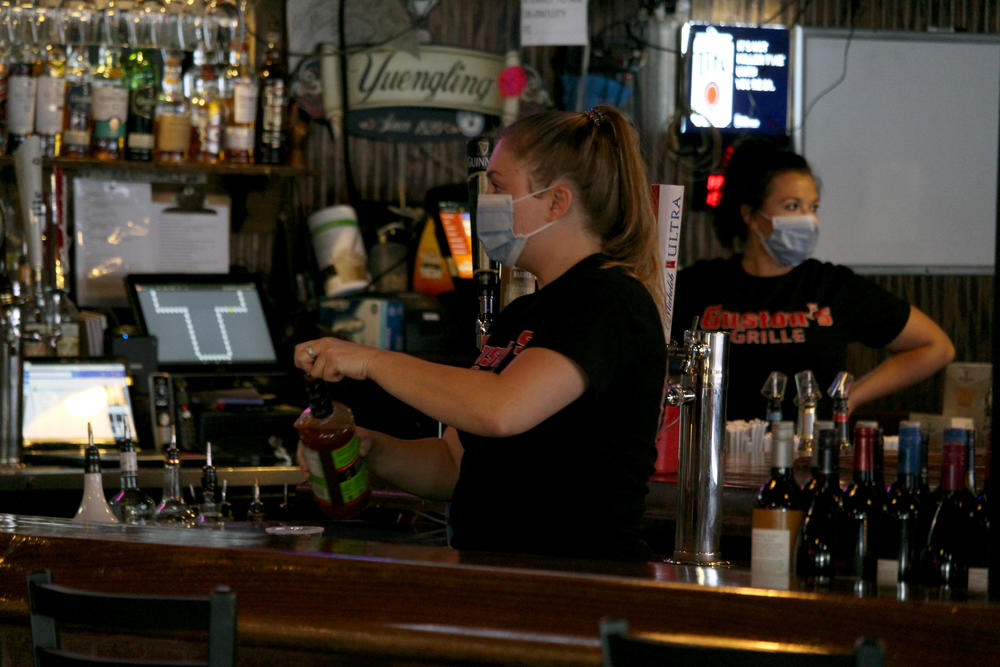