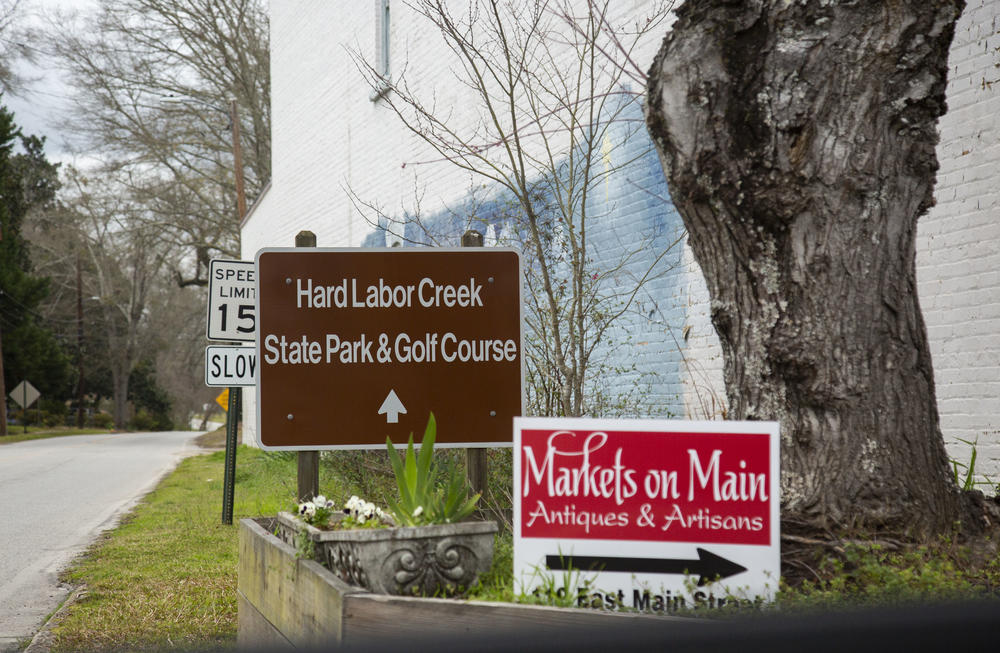 The sign pointing to Hard Labor Creek State Park from downtown Rutledge, about 1/2 mile away from the isolation site for COVID-19 patients. / GPB News

A Cherokee County resident "was not able to isolate at their primary residence and was not in critical condition requiring any hospital admittance," the governor's office said.

The isolation camp in Morgan County is designed to house patients with COVID-19, the disease caused by the coronavirus first discovered late last year in China.

There are currently six COVID-19 cases confirmed by the Atlanta-based Centers for Disease Control and Prevention and 16 more presumptive cases in Georgia, according to the Department of Public Health.

MORE: Officials To Use State Park To Isolate COVID-19 Patients In Georgia

RELATED: Where Hard Labor Creek State Park Got Its Name

Hard Labor Creek State Park was built in 1934 by the Civilian Conservation Corps, which was a New Deal program sponsored by President Roosevelt. It was administered as a division of the U.S. Army to reclaim unusable farm land, create recreational areas, and teach young men a skill or trade. Enlistees of the CCC were paid about $30 for a six-month enlistment, $25 of which was automatically sent to the enlistee’s family, according to a historical marker located at the Blacksmith's Shop in the park.

The seven-camper trailer isolation facility is about half mile from downtown Rutledge. They are intended for people infected with coronavirus who do not have adequate housing for medical isolation but who are not showing symptoms of COVID-19.

Residents like Denis Forte said they haven’t heard anything from the state about the plan and would like to know more.

"I don’t want to get into the whole fear based of it because I think that’s what media does," Forte said. "But you know you’d like to know what’s going on in your backyard."

A representative from the governor’s office said health and emergency management officials will keep the camp supplied without putting residents at risk.

Georgia Emergency Management and Homeland Security Director Homer Bryson said this site was specifically chosen for its isolation from the general public and ability to house mobile units in the short term.

"State public health staff will monitor the individual's progress and work together with state law enforcement to ensure the safety of the community and the patient," Bryson said.