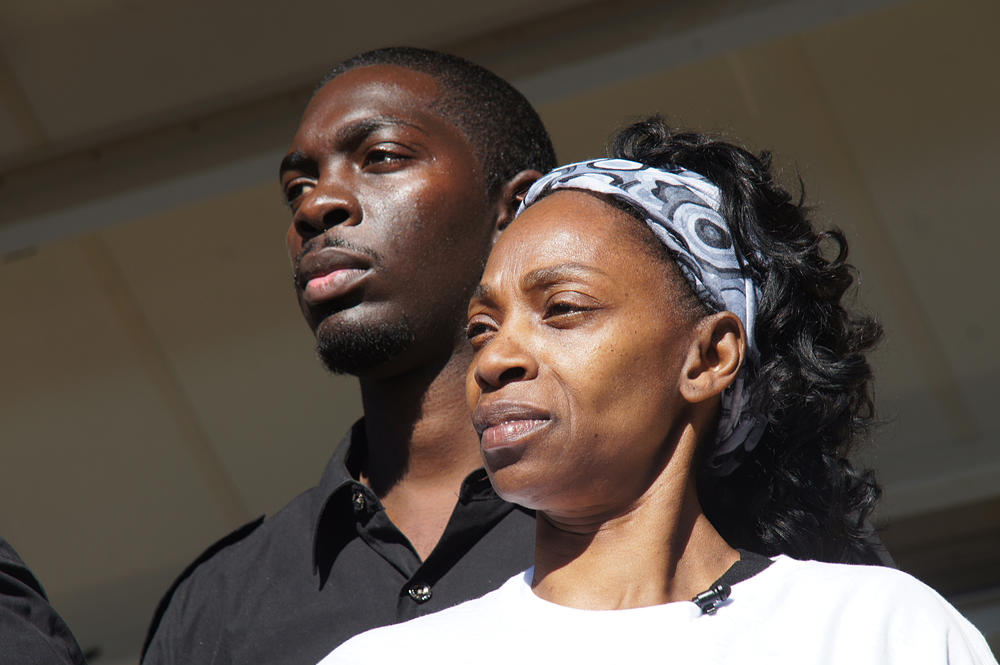 Claudia and Pierre Lacy from the documentary 'Always in Season.' The film makes its television premiere on PBS' Independent Lens on Monday, Feb. 24.

The Equal Justice Initiative documents nearly 5,000 lynchings in America between 1877 and 1950, though the number is likely higher. The vast majority of those lynched were African American men. Many were hanged, shot and mutilated in public events advertised on the radio and in newspapers.

The documentary Always In Season looks at this history of racism and lynching in the U.S. and connects it to the racial climate and justice today.

Part of the narrative follows the annual reenactment of four people killed by a mob in Monroe, Georgia — also known as the Moore's Ford lynchings — and uses that historical context to explore the investigation of the death of a young black man in 2014.

Director Jacqueline Olive was at Georgia Public Broadcasting in Atlanta for a screening and panel discussion on racial justice and reconciliation earlier this month. Then, she joined On Second Thought to talk about the film and her engagement with viewers in communities across the country.

Content warning: Lynchings are crimes of extreme brutality, and some details come up in our conversation. Sensitive listeners and parents, please be advised.

On the impact of lynchings, generations later

Historically, there's been a lot of cover-up around lynching. Even still in communities like Monroe, people just don't want to confront this history because [...] they feel as if [...] they've moved past these issues of racial violence. And to me, it's important that communities acknowledge this history. It's a sign that they're willing to confront issues of racial division that are current and historic.

On Olive’s thought process behind portraying lynching stories on film

People shouldn't be comfortable with stories about lynching and should understand the violence, without it being gratuitous. So giving people context, and information, and new ways to look at the images, for example. The lead editor Don Bernier, who was just amazing to collaborate with, he and I, we both decided that it was important to have a conversation about how spectators showed up in these stories and these narratives. And so not to just focus on the lynching victims — who were, by the way, when they were photographed, it was the final way to strip the last bits of their humanity away.

And so I was really conscious of not wanting to revictimize people in that way and to dehumanize people in that way, but to really start a conversation about how spectators and how lynchers showed up in this narrative, so that we start to focus on how this dehumanization can lead to violence, and to have a conversation about lynching that is evolved and that is elevated. It's much more deep than whether or not people are angry, or who’s angry and who isn’t. Everyone has been impacted by this history. When white men, women and children came out to cheer on the violence, even when they thought it was a great idea, they still had to go home, in their quiet moments, and acknowledge the fact that they witnessed murder. That they were complicit. That neighbors, and people of authority, were complicit. Even when they are not consciously unpacking that, there are things that, out of this trauma, that are passed along. And so it's really important that we all come together for these conversations and start to really unpack in many ways, and in complex ways, how this history has affected us and what it looks like today, and how it's showing up in institutions today.

And I came across that in, not just Monroe and Atlanta, but in communities around the country where people were really concerned about addressing this history and directly unpacking the details. They were concerned that it was dividing — that it would divide communities. What I found is that as people start to open up, it is because people are confronting all of these emotions: pain, anger, fear, guilt and shame. These are all the feelings that I saw people encountering. I think it's really important that we're present with them, including guilt. And I think guilt is actually a very — when it's authentic — it's a very valuable and very powerful emotion, because it tells you that there's a change that needs to happen. And all of these emotions, we're all capable of handling. We're all capable of handling discomfort. It's important that we are uncomfortable. The silence and the cover-up has come out of this idea that people need to be in polite conversation and always comfortable, but [...] in discomfort is where you have the opportunity to evolve and to move past where you are.

On how the film has encouraged honest discussions about race, racism and reconciliation

As we have been screening the film across the country, there have been amazing conversations, where people showed up [...] not necessarily understanding how the stories would personally connect with their own lives, but by the end, were talking very deeply for the first time about issues of race and racism and violence. And [the fact] that we're having these conversations again and again is really exciting for me, so that communities can start to imagine what repair looks like, in addition to pushing institutions for financial restitution, for example. It's also about what we can do for each other and how we can show up for each other in our communities.