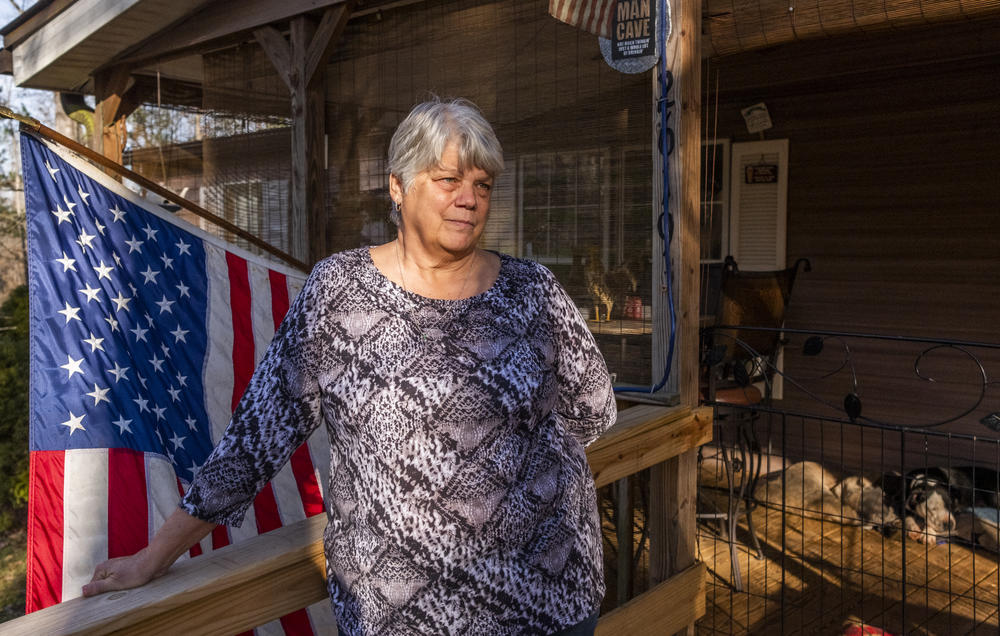 Gloria Hammond says Georgia Power first asked to buy her home near the coal ash pond at the utility's Plant Scherer not long after her husband, Cason, was diagnosed with terminal cancer.

Gloria Hammond remembers the day the man from Georgia Power came to talk about buying the home she shared with her husband Cason.  They were just back from the hospital. The man gone no farther than the front yard.

“I said, ‘Look, I'm telling you right now, we're not selling nothing right now,’” Hammond said. “Because I already knew Cason was terminal.”

By terminal she meant Cason was already sick with the cancer that eventually took his life. By then, most everyone else up and down Luther Smith Road in Juliette had already sold out to the utility.

“You see, it’s just only two of us left on the road,” Hammond said.

The Hammonds sent the man packing from the property that had been in Cason Hammond’s family for something like a hundred years. That was two years ago.

“They haven't offered me nothing,” Hammond said of the man from Georgia Power. “He just told me, he said, 'You know, I will be back.’”

While she's sure Georgia Power still wants the house where she is helping to raise her grandchildren, what Hammond has never known is exactly why the utility has bought so many homes in Juliette in the first place. In an email exchange, Georgia Power spokesperson Holly Crawford said it's been to establish a buffer around their coal ash pond at Plant Scherer. What she didn’t say is why they need the buffer.  Like Gloria Hammond, many in Juliette wonder if it isn’t connected to illnesses that have afflicted their loved ones, like the cancer that killed Cason Hammond.

A new bill, Georgia House Bill 756, is aimed at forcing utilities to seal coal ash away from water, in part because of decades of unanswered questions about coal ash and health in Juliette.

"We know that our water testing is showing bad results in certain wells in certain areas of the state, and we have to be more protective of our water source," said Georgia House member Mary Margaret Oliver, (D-Decatur). Oliver is one of the sponsors of the bill.

In support of that bill and also to provide some answers to residents, Fletcher Sams of the Altamaha River Keeper is doing new testing. He's taking water samples from kitchen sinks, at the Hammond place and at 99 other homes where people rely on wells for drinking water, wells drawn from groundwater that could be tainted with coal ash.

Meanwhile, Sams said while there are many things we don't know, there are a few things we are sure of.

“We know and we can prove that the bottom of that ash pond is in contact with the aquifer,” Sams said at a park by the Ocmulgee River in downtown Juliette.

That  much was made clear in hearings on the handover of coal ash management from the EPA to the Georgia Environmental Protection Division in 2019. Right now, coal ash is partially submerged in groundwater in five of the 29 ash ponds Georgia Power is closing, near the towns of Smyrna, Rome, Newnan and Carrollton as well as in Juliette. Additionally, another report suggests that coal ash toxins have been leaking from 90% of all Georgia Power coal ash storage facilities.

Georgia Power said the plans to seal the ponds above ground, but not underground, something called Advanced Seal in Place, are legal. For now that’s true there as well as for landfills that might store coal ash dry. But if they were storing something like your kitchen trash it wouldn’t be. By Georgia law, municipal landfills must have seals that keep waste fluid out of groundwater. So the framers of Georgia House Bill 756 say its aim is to regulate coal ash at least as well as household garbage by mandating it be stored away from aquifers.

The second thing we know is that there are things in coal ash can make you sick, things like heavy metals.

"So a number of these metals, these are metals like arsenic or chromium or mercury or cadmium. These are known to be toxic metals," said Carmen Marsit, director of the Hercules Exposome Research Center at Emory University. There they help communities understand health issues through science. They will be vetting Fletcher Sams' water samples.

"They're concerning because if they're in drinking water, you're having  consistent exposure to these metals that could be related to a number of different health outcomes, things like respiratory health outcomes, asthma in children or emphysema in adults. It could be related to long term development of cancers depending on the type of metal that you're looking at," Marsit said.

In the case of lead, the risk is neurological impairment. Lead was on the mind of the mother of the 3-year-old girl in a home Sams tested closer to downtown Juliette. The mother, who asked not to be identified by name, said she had some notion of the risks of living in Juliette before she moved there.

“You know, people kind of talked about the plant. You know, the air, the water,” she told Sams as he took notes on the family’s health. She had reminded Sams that her 3-year-old daughter has been diagnosed with elevated levels of lead not long after he arrived.

“If they would come out and be like, ‘Hey, you know, this is the situation. You know, the water, you may have to....’ And they just were open and honest about it, I think a lot of people would not be as angry and as upset as they are,” she said of Georgia Power.

“This is all the water she's ever known. You know, if it comes back positive, she's been exposed to that for her whole life, what do you do from that point on?” she finished.

Sams filled the requisite number of bottles for the testing, then told the mother she might want to go ahead and think about switching to bottled water.

“We're not trying to shut down the plant,” Sams told her. “You know, we're just trying to make sure that the mess is cleaned up.”

Via email, Georgia Power’s Holly Crawford said when they have turned up heavy metals in their test wells, they have been within legal limits, which could lead one to assume that there are levels of heavy metals we can consume safely. Carmen Marsit, director of the Hercules Exposome Research Center at Emory University, said that’s not a safe assumption.

“I wouldn't I wouldn't go so far as to say safely. We don't know really at what level a lot of these metals are considered safe, particularly metals like arsenic or cadmium,” Marsit said. “They do not have a role in the body in a normal function.”

But Marsit said there are limitations to what that data can tell us. First, he said it's important to know the samples are one day snapshots of what was in the water. Even if they come back with high levels of heavy metals, they wouldn’t be enough on their own to say without a doubt polluted well water has been what’s made people sick in Juliette.

Instead, Marsit said the strength of the data would come in fighting future risk. If the tests come back toxic, then the better-safe-than-sorry move would be finding a way to cut off the source of the toxins before people had a chance to consume them.

“I would generally say it's safer to, you know, try to protect people from exposure,” Marsit said. “If we can prevent the exposure, you're much more likely to then prevent the health effect than trying to say, ‘Well, there's not that much exposure, so it's not so bad.'”

With coal ash, exposure prevention would likely mean locking the material away from air and water. That is what is happening in North Carolina where Duke Power is moving coal ash to lined and sealed storage after an out of court settlement, and it’s also what legislators are asking for in Georgia House bill 756.

A home downhill from the Plant Scherer ash pond, left, in 2014. The same plot of land in 2020, right. Georgia Power has bought homes, demolished them and then padlocked the land on which they sat around the coal ash pond of Plant Scherer. 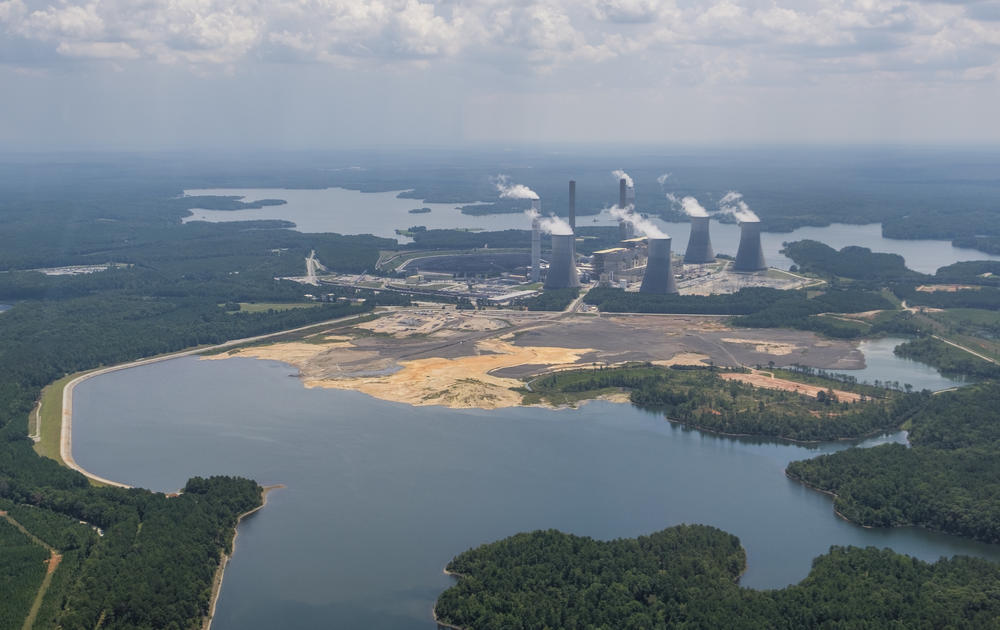 The coal ash pond, foreground, where waste from Georgia Power's coal fired Plant Scherer is stored, in August of 2019. The coal ash is partially submerged in the local aquifer.

Georgia Power's Plant Scherer, left, and a graffitied sign not far from the plant in Juliette, right.