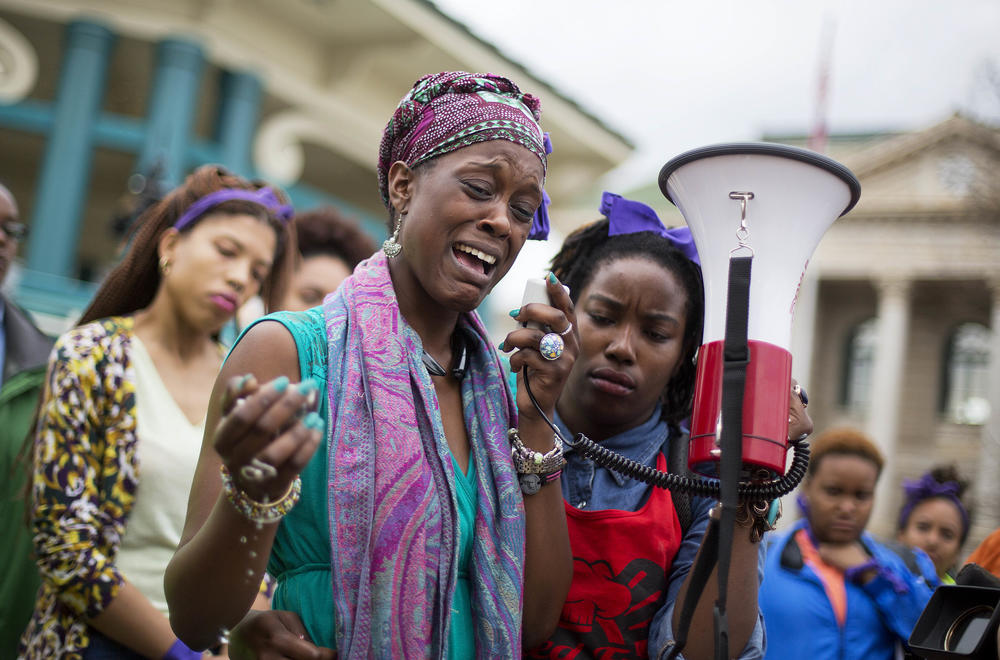 Caption
Omega Menders cries as she speaks to protesters demonstrating the shooting death of 27-year-old Anthony Hill by a police officer, Wednesday, March 11, 2015, in Decatur, Ga. Robert Olsen faces prison time when he is sentenced on four charges Nov. 1, 2019.

Eric Garner. Michael Brown. Laquan McDonald. Freddie Gray. Anthony Hill. The list of officer-involved deaths is long and the death of Atatiana Jefferson, who was killed when a Fort Worth, Texas, police officer fired into her bedroom window, has revived questions about training, law enforcement and consequences.

Here in Georgia, former DeKalb County police officer Robert Olsen is set to be sentenced on Nov. 1. He's been cleared of murder charges in the death of Anthony Hill but convicted of four other charges. These incidents keep on happening. And, today, we're exploring some of the efforts to stop that trend.

Cedric Alexander was DeKalb County director of public safety when Hill was killed. He's now a consultant and leading advocate for police reform. He and Chris Stewart, civil rights attorney who's represented several families of black men shot and killed by police, join host Virginia Prescott for a conversation about the issues surrounding police-involved shootings.

Chris Stewart: Well, he can face up to, I believe, about 35 years. He was found guilty for shooting the young man and then also for, I think, lying later in his police report and then also for violating the use of force policy by the department. So, it is really a very locked-down case for the civil suit that's going on. But he can still face extreme time.

On learning a naked, unarmed man had been shot in DeKalb County in 2015

Cedric Alexander: You may recollect during that time, I was also on President Obama's task force on 21st century policing. Its primary focus, and the charge we were given by President Obama at that time, was to find ways in which we could build better relationships between police and community. And one thing that came out as a result of our findings being on that task force is that it's important that anytime you have an officer-involved shooting, involving death, you take that investigation from yourself and give it to an outside entity i.e. the Georgia Bureau Investigation in this case, which removes you from it so that the public will feel that a fair and impartial investigation is taking place.

Stewart: People have to understand it's all in the details. I've reviewed countless police department policies and they don't have rules on when you activate or when you can turn (the camera) off. Do you have to actually keep looking at the scene? Some officers will turn away knowing that their body cam is on. So, there is a loophole constantly, especially with the use-of-force policies. There aren't rules all the time. They're written by lawyers and it's very vague. I had the case with Walter Scott. Body cams were instituted after that. Right when we demanded it from the governor. And then it happened with Gregory Towns who I represented, who was killed down here. East Point didn't have a Taser policy and he was tasered to death about 20 times. So, there is a policy, but what are the details?

What role does racism play in shootings by white officers of black people?

Stewart: I was asked whether it was racism with Walter Scott, when I took that case — he was killed in South Carolina. That was the first question that I was asked at a press conference. And my answer then was, well, I don't know Michael Slager so I can't comment on that. We hadn’t researched him and we didn't know anything; it had just happened. So, you know, that's impossible to say unless you know that officer, and you know that officer's mindset. But what we do know is this constantly happens to African Americans, particularly in the inner city. And that's a problem. But that is a myriad of problems. Those communities are over policed in some situations. They have the wrong officers working in those areas. Temperament checks has to be something that is vital when you're policing, especially in inner city areas. And especially there are implicit biases. There are situations where officers will fire quicker because the person is a person of color. And it is an implicit bias situation, which is why some departments do have implicit bias training. But a lot of them don't.

On police crisis training that Olsen had. Did that training fail?

Alexander: Let's take it to a much broader perspective in that three things I wrote in the most recent CNN op ed as it relates to the Atatiana Jefferson case in Fort Worth. And (one of the) three things I've pointed out here is that police are going to have to recruit better. Who are we recruiting to become police officers? I need them no more than just their credit check, their driving record, their criminal behavior, if there is any. I need to know more about that person as to what are their ethics and morals, and how do they view diversity, and those kinds of issues that are more salient to the very diverse world we live in today. That's number one. And we're not recruiting cowboys and cowgirls. We're recruiting guardians of a community. We're going to train them to protect themselves because it is a dangerous world that they're in, that in many communities is not just relegated to communities of color.

Secondly, once we recruit, how do we train? We’ve got to go beyond the shoot/don't shoot scenarios. We’ve got to train for greater than what we have in retraining, not just in the academy, but post-academy training. Do officers get enough training around de-escalation and do they get more training around implicit bias? See, those words, those classes where everybody says, “Well, we've done de-escalation training, we've been in implicit bias training.” That means nothing if it's not being reinforced by leadership from the top of the organization down to their first-line supervisor.

So if I have a man or woman officer, male or female, that goes through de-escalation training and goes through implicit bias training, when I'm working with them as their boss, I want to see them apply those tools when they can apply them. In some cases, it will be appropriate and in others it may not be, but it has to be reinforced.

Stewart: How are police officers not one of the highest paid professions in this country when they are the only people that can take life, put you in jail for life and protect you all at once? I mean, it's insanity that the standards to become an officer aren't just like becoming a doctor, a lawyer, a professor, whatever it may be, and that they aren't paid to that degree. In America, the better pay, the higher quality you're going to get. I mean, that's just the fact. But it's purposely done where most police officers make less than teachers or less than sanitation worker in some cities. It's insanity.

Secondly, most these officers are allowed to bounce around. So, when I get a case, first thing we'd look up is his background. He's worked at four different departments, moved from place to place — because they can resign before they get fired or they can just bounce around. So, of course, if someone is bouncing around that’s problematic. But, because departments need officers, they need bodies so they overlook it. And then the guy kills someone or he has a myriad of problems with internal affairs.

I'll sit down with chiefs, and I've told them, if you have an officer that is pushing the line a little bit, punching someone unnecessarily, going a little bit too far, they're going to end up killing someone. So, you've got to fire them or stop them now.

On what the families are asking for to receive justice

Stewart: Of course, they're looking for an arrest, you know, because the loved one has been taken, and they're looking for change. One of the biggest things that we always try and do is not just settle the civil case, but to make sure there was change. In Alton Sterling’s [case], which was another super viral shooting in Baton Rouge, we finally got a use-of-force policy instituted. They didn't have one before. So, we try and find a way to create change in each situation so that there isn't another Alton Sterling or Walter Scott.

Alexander: When it comes to police and community, these issues we're talking about are not new. They've been around since the inception of police. It's just that doing Michael Brown in 2014, it was kind of the 21st century tipping point, if you will, of bringing all this to light and all of everything that happened and came behind it. And you have 18,000 police departments in this country, 18,000. And there are some standards, but in some cases departments are doing things 18,000 different ways.

But here again, the officers may get training at the academy, but the challenge becomes power. They're being supervised and mentored from that point on. But you have some great chiefs out there doing some magnificent things. The attorney talked about the case back in East Point with that tasing incident, which was horrible. But you have new leadership there. You have a new chief there. And departments like East Point and Douglasville, I myself over the last several months have been inside both sides of both of those departments doing leadership and implicit bias training. Leadership in those agencies play a key role, not just in terms of talking about it, but actually exercising and practicing it, and doing it every day where it becomes a part of that culture of that organization. 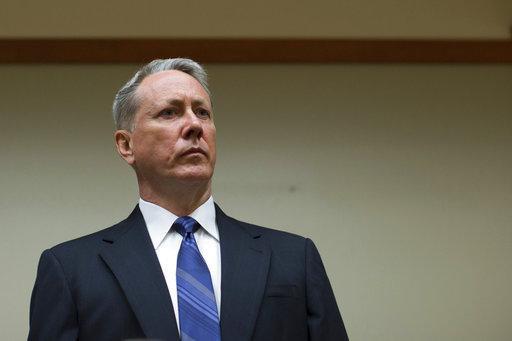 Caption
Robert "Chip" Olsen, who fatally shot an unarmed, naked man, was found not guilty of murder but was convicted of aggravated assault and other charges that could send him to prison for more than 30 years.