In 1832, playwright and peformer Thomas Dartmouth Rice used theatrical make-up to create a supposedly black character. The character's name was Jim Crow. That name later came to represent a system of extra-judicial terror and racial segregation laws that ended in 1965, but the recent political crisis in Virginia shows dressing up in blackface did not.

A poll published by "The Washington Post" has Virginians split over whether Gov. Ralph Northam should resign after a photo from his 1984 Medical School yearbook surfaced. It shows a character in blackface next to a person wearing a Ku Klux Klan hood. Last week, a Pew Research Center poll found about 34 percent of all Americans say, "Dressing up in blackface is always or sometimes acceptable for a Halloween costume."

More recently, Italian fashion house Gucci announced it will step up its diversity hiring as part of a long-term plan to build cultural awareness at the luxury fashion company following an uproar over a sweater that resembled blackface.

Given Georgia's difficult past with race relations, could it end up with its own blackface scandal? Alexis Clark has done research on the history of blackface and recent scandals involving public officials. The journalist and Spelman graduate spoke with "On Second Thought" host Virginia Prescott about the origins of blackface and recent controversy related to the topic. Clark is also author of "Enemies In Love: A German POW, a Black Nurse, and an Unlikely Romance."

Without Atlanta legend John Portman, you might never walk into a hotel lobby with a cavernous atrium, an office tower with stacked balconies or a shopping center with transparent elevators whizzing up and down. Portman revolutionized architecture, turning buildings inward to jaw-dropping effect. To quote his close friend, Ambassador Andrew Young, "Everybody became a country bumpkin when they walked into the Hyatt. You had to say, 'Oh my god, what is this?'"

Highly influential and often imitated, Portman was also a developer. His Peachtree Center, Marriott Marquis, Hyatt Regency – the first fully integrated hotel in Atlanta – and other mega-structures brought new life to the city's crumbling urban center in the 1960s. Soon after, he took his designs to San Francisco, where he created the Embarcadero Center; New York, with another Marriott Marquis on Times Square; and Detroit, where he built what was, until recently, the Western Hemisphere's tallest hotel in the Renaissance Center.

Portman, who died in December 2017 at the age of 93, and his imprint on cityscapes around the world are the subject of "Portman's America: & Other Speculations." We spoke with "Portman's America" editor Mohsen Mostafavi, who is also dean of the Harvard Graduate School of Design, about the architect and his legacy. 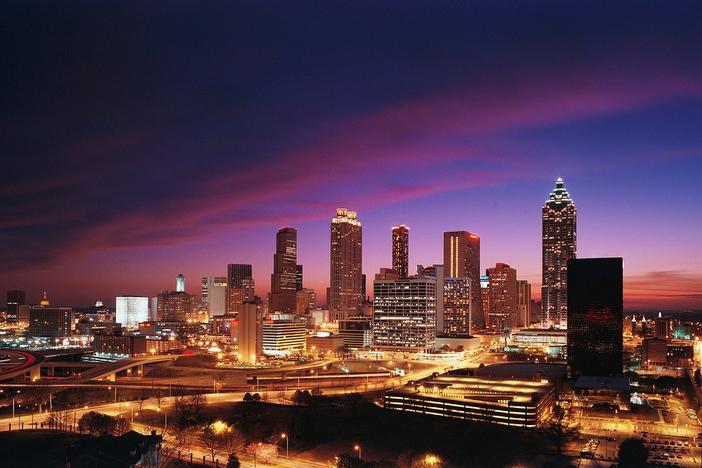 Without Atlanta legend John Portman, you might never walk into a hotel lobby with a cavernous atrium, an office tower with stacked balconies or a...