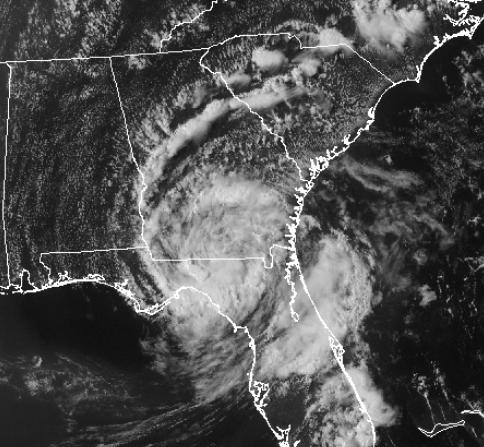 Author's note: Due to the early start to the Hurricane Season this year, I thought it would be a great time to re-post this entry. Enjoy, and Happy Memorial Day! ~ Chrissy

In my previous post, “If A Storm Brews In The Tropics, Is It Really A Tropical Storm?”, I mentioned the main characteristics of a tropical cyclone: the presence of a “warm core”, or a “barotropic” system of convection, and a “closed circulation”, or isobars drawn as concentric rings on a surface pressure map. However, there is one tropical weather feature that often gets mentioned that is technically not a tropical cyclone – the ambiguously named “tropical disturbance.” So let’s use this post to clear this up and summarize some terms.

A diagram illustrating the different kinds of tropical weather. Courtesy of the National Hurricane Center.

According to the Atlantic Oceanographic and Meteorological Laboratory Hurricane Research Division (AOML HRD), a tropical disturbance is “a discrete tropical weather system of apparently organized convection...originating in the tropics or subtropics, having a nonfrontal migratory character, and maintaining its identity for 24 hours or more” (Source: AOML HRD). Tropical disturbances are not part of the “tropical cyclone” category, though, because disturbances lack the presence of a closed circulation. However, tropical disturbances are still areas of low pressure (and therefore they are still areas of rain and thunderstorms) - they are just not developed enough to receive the special “tropical cyclone” designation. 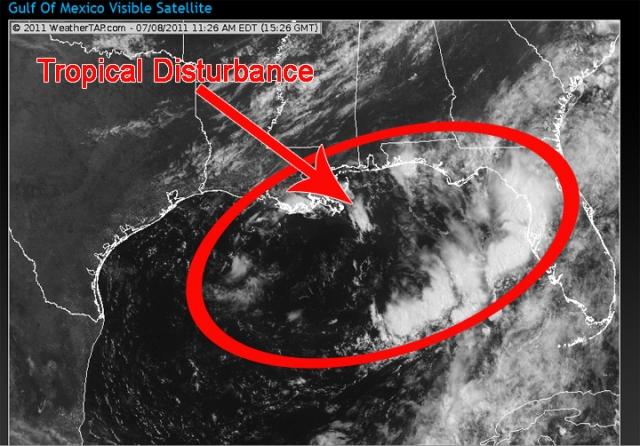 A visible satellite image of a tropical disturbance in the Gulf of Mexico.

A tropical depression is “a tropical cyclone in which the maximum sustained wind speed (using the U.S. 1 minute average standard) is up to 33 knots (38 mph). Depressions have a closed circulation” (Source: AOML HRD). Depending on atmospheric conditions around a tropical depression, it can either weaken and dissipate, or it can become more organized and strengthen into a tropical storm.

A visible satellite image of a tropical depression in the Gulf of Mexico.

A tropical storm is defined as “a tropical cyclone in which the maximum sustained surface wind speed (using the U.S. 1 minute average standard) ranges from 34 knots (39 mph) to 63 knots (73 mph). The convection in tropical storms is usually more concentrated near the center with outer rainfall organizing into distinct bands” (Source: AOML HRD). 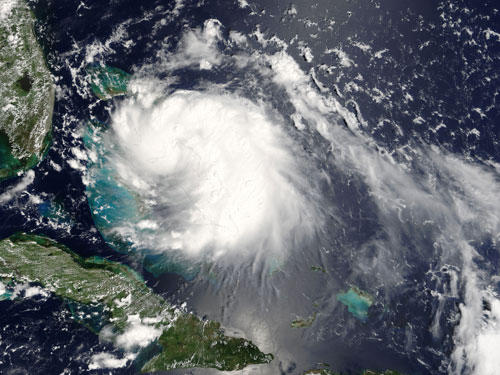 A visible satellite image of Katrina as a tropical storm, August 2005. Image courtesy of the National Hurricane Center.

Frequently, tropical storms make landfall near Georgia and cause considerable amounts of damage due to flooding and wind damage. In 1994, Tropical Storm Alberto made landfall near Fort Walton Beach, Florida, then promptly stalled over the state of Georgia for several days. During this time, cities in west Georgia received record amounts of rainfall - including Americus, Georgia, which received 21.1 inches of rain during the 24 hour period between July 5 and July 6, 1994 (Source: NOAA National Data Center). While tropical storms are highly destructive, they also have the ability to become an even bigger threat as a hurricane.

The rainfall totals across Alabama and Georgia. Image courtesy of the Hydrological Prediction Center.

Hurricanes are tropical cyclones in which the maximum sustained surface wind speed (using the U.S. 1 minute average standard) is equal to or exceeds 64 knots (74 mph). Hurricanes are categorized by the Saffir-Simpson scale, which uses the maximum sustained wind speed to give meteorologists an idea of how much flooding and property damage would occur if the hurricane were to make landfall in any given area (Source: AOML HRD).

The last hurricane to strike the Georgia coast was Hurricane David, who came to shore just south of Savannah in 1979. Within the US, Hurricane David killed 15 people and caused over $300 million in damages (Source: Georgia Emergency Management Agency). Twenty years later, Hurricane Floyd was threatening to strike the Georgia coast when it abruptly turned northeast and hit the coast of North Carolina in September of 1999. Regardless, 3 million people jammed the freeways of Georgia, Florida, and South Carolina in order to avoid the hazardous weather from Hurricane Floyd.

I hope that I have cleared up some of the confusion regarding tropical weather systems! In my next post, I will highlight the different categories within the Saffir-Simpson scale. I will also post some important cautionary tips in the event that a tropical cyclone makes its way into our state.

In the mean time, I would love to hear any stories from you regarding your experiences with tropical storms and hurricanes – did you evacuate for Hurricane Floyd? Are you a Hurricane Katrina transplant? Did you experience the massive flooding from Tropical Storm Alberto? Or did you do what I did and spend the night in your living room, in fear that a tree would come crashing down on the house while Opal zipped through Georgia? Share your story! I would love to hear from you.

Related Posts You May Like
If A Storm Brews In The Tropics, Is It Really A Tropical Storm?
A Hurricane By Any Other Name Would Still Be As Stormy
Tour Through The Hurricane Hunters' Airplane