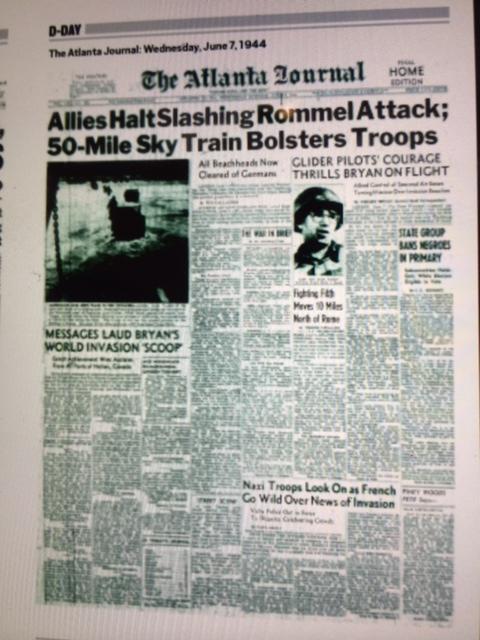 On this 70th anniversary of D-Day, the Atlanta Constitution has published a thrilling supplement to today's edition: full page copies of the front pages of the Journal and the Constitution from June 7 and 8, 1944. Reading the reports of the invasion as journalism rather than history makes even clearer the extraordinary courage and dedication of the soldiers who stormed the beaches, fighting for freedom and the preservation of Western democracies. Nothing can ever diminish the sacrifices made by young men - many of them no doubt Georgians - far from home on the beaches of Normandy on that historic day.

How ironic then, that the front page of the June 7, 1944, Atlanta Journal also carries another important story just under news of the invasion: "State Group Bans Negros in Primary. Subcommittee Holds Only White Electors Eligible to Vote." The story reports that a subcommittee of the Georgia Democratic Party had adopted a resolution reaffirming the rule of the party that only whites could participate in the July 4 primary election. (Yes, another irony - the election would be held on Independence Day.) Georgia Democratic officials had found it necessary to reaffirm the rule in response to a U.S. Supreme Court decision handed down in April, 1944, which declared that Texas could not block black voters from casting ballots in primary elections. Georgia Democrats insisted the ruling had no impact here.

The history that we share as Georgians is so complex, so difficult to try to reconcile. It's soul-piercing and almost unfathomable in today's world to acknowledge that the heroism of Georgia soldiers liberating Europe stood in such stark contrast to the disenfranchisement of blacks at home. Freedom for the French began on that June day in 1944. It would be two decades later before blacks here won the right to the vote with the passage of the Civil Rights Act of 1964.

The heroism of our troops on D-Day strikes a chord deep inside of me, as it does most of us. This surely is a day to honor the sacrifice and remarkable fortitude of the young men who fought at Normandy. It's a day to be glad to be an American. We are a nation that refuses to allow tyranny to flourish. And although it took 20 years longer for some Americans to have the same freedoms that we fought to restore in Europe, I am grateful that in this country, we almost always find our way to fairness and justice, no matter how long and hard the fight to get there.