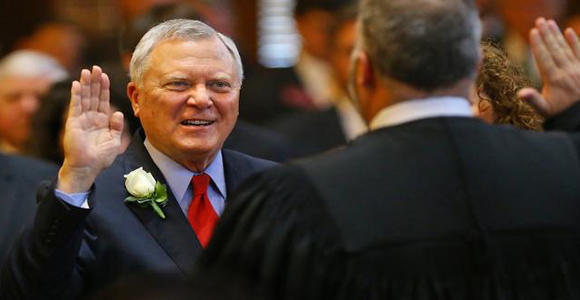 An ambitious legislative session is on tap including contentious issues such as medical marijuana and new funding for transportation and education.

Who are the main players driving the agenda, what are the challenges they’ll face? “Lawmakers” and “Political Rewind” host Bill Nigut breaks down the five things to know about Georgia’s 2015 legislative session.

Nigut: He’s coming with a two-year plan for improving the state’s schools. In this session, the first year of those plans, he’s going to work on legislation that would allow the state to take over failing school systems. An example of that happened in DeKalb county where there had been tremendous problems and the governor’s office moved in and was able to replace a number of board members with their own people and try to improve the situation.

That was done under exceptional circumstances and now they are going to look for the power to do that around the state. This is about administrative issues; this is not replacing teachers. This is about, if a school board can’t get its act together and if a school is failing in a given district, the governor’s office wants the power to move in and replace people.

Nigut: The governor’s other priority is continuing his criminal justice reform. He wants to continue to find ways to give convicted felons opportunities to become educated and trained, so that when they emerge from prison they have the potential to find work. He said recently that prisoners are already being trained, but what they’re being trained to do is to be better criminals. He wants them to have opportunities to grow as individuals so that they can come out of jail and not go right back into the criminal justice system.

Nigut: And, transportation is going to be on his agenda. The state acknowledges that we need to find more than just a billion dollars a year in funds to improve our infrastructure. Our roads are crumbling. To build new roads and to try to come up with a billion plus dollars a year is an enormous challenge, but they are going to find a way to do it. The question is,“What’s the revenue stream?”

New taxes, where are they going to come from? There is going to be enormous push back from those who want no tax increases.

Nigut: Allen Peake this year filed House Bill number one, which is once again his effort to legalize the use of marijuana for children with seizure disorders. I think a great many people admire Allen Peake because he’s handled this in a very methodical business-like way; he has not gotten caught up in a lot of the fighting and feuding around his legislation. He’s been very calm; he’s been very respectful of those who disagree with him.

But he’s also very passionate about helping parents who have children with seizure disorders. So Allen Peake will be interesting to watch.

On the senate side, Josh McKoon from south Georgia, from the Columbus area, always seems to have bills that get a lot of attention. He’s one of the chief sponsors of the religious liberty bill that everybody’s talking about - a bill that would presumably - if you listen to his telling of it - preserves our right to practice our religion and speak out about what our religion teaches us in government settings without fear of being penalized, punished in any way. No punitive action.

And he’s very determined to make this happen. He failed last year. So we’re going to watch him very closely because there are many people who are critics who think this is really an effort to give employers the right to fire people they don’t like: gays, lesbians - people whose lifestyles are supposedly outside of orthodox Christianity - and that’s a key here - Christian teachings. It would be more compelling if there were interfaith leaders who supported this initiative but there aren’t. So McKoon is always a standout.

3.) Though it’s years away, the race for governor will start now.

Nigut: There’s no question that the maneuvering for the governor’s race in 2018 is already going to start getting underway and we’ll see it unfold at the Capitol. Lieutenant Gov. Casey Cagle presumably will want to look at that race in 2018. I don’t know if he’ll absolutely decide to run or not but on the theory that he very well might, we’re going to start looking at his agenda to see how he fashions plans that will appeal to the voters he’s going to want to attract in the campaign.

The attorney general is presumed to be a candidate in 2018 for governor. So what will Sam Olens’ agenda be? The attorney general always has a legislative package. What’s Sam Olens going to want to propose that he will two years down the line say to the voters, ‘here’s what I stand for and why I’d be a great governor.’

So that will be very interesting to watch.

The speaker of the house - he’s got a larger Republican majority than ever before - so we’ll see how he exercises the power that that brings to him and to the house.

4.) Not having a bad economy will be the biggest challenge.

Nigut: The biggest challenge they are all going to have this year is that for a number of years, we’ve had a bad economy; the revenues aren’t there. So it’s been a little easier for legislators and leadership - the governor and the speaker - to put off people who come with big requests for money. It’s been easy to say: ‘we don’t have money. Don’t bother us; we can’t help you.’

Well this year, they have got money. How are they going to spend it? That’s going to be really interesting to watch. The excuse is gone. So what are their priorities?

(It has already unfolded with the State of the State address). He’ll do a budget address and then we’ll hear how the legislature fashions its agenda around spending issues.

Nigut: The biggest question is how are they going to find a way outside of the revenue stream that already exists to come up with an additional one plus billion dollars and that’s a low estimate. The estimate is as high as 1.5 billion dollars a year to take care of our needs in transportation and again that’s roads only. That doesn’t include whether we need a rail line. That is the money issue that will hang over the entire legislative session.

5.) Democrats will be an essential ally.

Nigut: Democrats are going to be really crucial this year. It’s interesting - even though there are more Republicans than ever around a couple of the biggest issues, there is enough controversy around Republican circles that the governor and the speaker, the Republican speaker and Republican governor are going to need democratic help to pass key initiatives. So, at some point, there will be a decision on raising some kind of tax revenue stream for transportation.

There will be enough conservative Republicans who say we oppose any tax hike and Tea Party groups will line up to say ‘we oppose any tax hike.’ The only way the governor will be able to pass that initiative is by reaching across the aisle and getting democratic support. So in some ways, despite their smaller numbers, Democrats are in a stronger position this session than they’d been in many years.