Here are some of the top performers from the first week of high school football:

Cooper Blauser, WR/DB, Wesleyan: Caught nine passes for school-record 229 yards and three touchdowns, ran for a touchdown and intercepted a pass in 45-14 win over Mount Pisgah.

Jermaine Brewton, QB, Pierce County: Completed 10 of 13 passes for 191 yards and two touchdowns and rushed seven times for 52 yards and one touchdown in a 31-10 win over Brunswick.

Barrett Carter, LB, North Gwinnett: Scored on a 7-yard run, threw a two-point conversion pass, intercepted a pass and returned it for a 79-yard touchown and had 2 ½ tackles for loss in 35-7 win over McEachern.

Jackson Clouatre, RB, Habersham Central: Rushed for 175 yards and one touchdown in 27-6 win over Madison County.

J.Ben Haynes, QB, White County: Threw for a career-high 327 yards and three touchdowns in a 44-6 win over Stephens County. 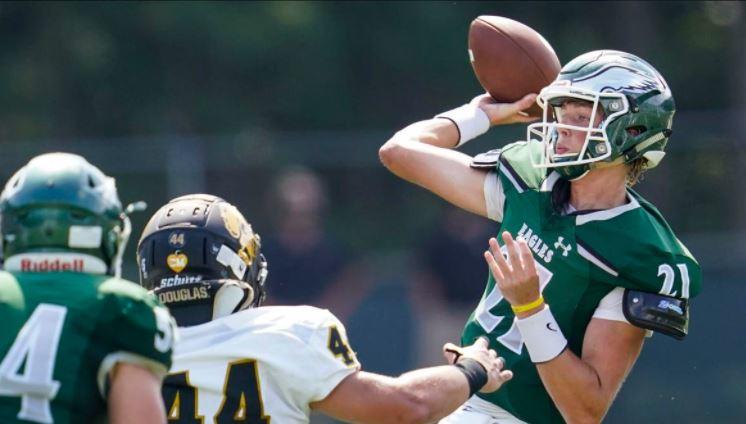 Asa James, RB, Woodland Cartersville: Rushed 24 times for 181 yards and scored two touchdowns, one rushing and one receiving, in a 14-7 win over Gordon Central.

Dylan Lonergan, QB, Brookwood: Completed of 43 passes for 433 yards and four touchdowns in a 40-34 win over Dacula.

Nelson Kinsey, OL, Ola:: Had six pancake blocks to help the team accumulate 540 yards in total offense in a 52-28 win over Jackson.

Spencer Robicheaux, QB, Savannah Christian: Threw for 180 yards and three touchdowns and rushed for 52 yards in a 38-14 win over ECI.

Stratton Tripp, QB, Cartersville: Completed 11 of 16 passes for 256 yards and three touchdowns in a 40-0 win over Morrow.

Brock Vandagriff, QB, Prince Avenue Christian: Completed 17 of 26 passes for 246 yards and four touchdowns and ran 10 times for 93 yards and two touchdowns in a 42-7 win over Calvary Day.

Javin Whatley, QB, Rockmart: Rushed 17 times for 144 yards and one touchdown and threw a 16-yard touchdown pass in 28-21 loss to Rome.