Top Performances From The Weekend 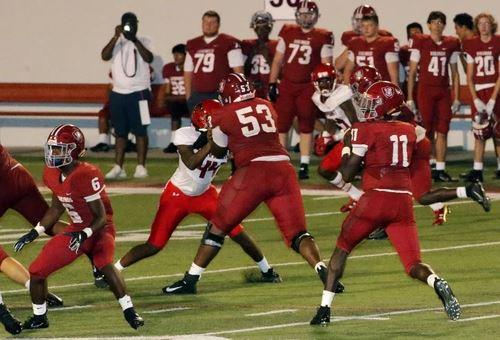 Keldrick Beck, Dodge County: Returned two interceptions for touchdowns, one for 53 yards, one for 35 yads, in 42-28 loss to West Laurens.

Jacurri Brown, Lowndes: Quarterback completed 7 of 12 passes for 116 yards and rushed for 111 yards and three touchdowns in a 38-7 win over Parkview.

Connor Cigelske, Marist: Dual-threat quarterback rushed 14 times for 105 yards and completed 8 of 12 passes for 163 yards and two touchdowns in 45-8 win over

Jaycee Harden, Colquitt County: Quarterback was 21-for-27 for 341 yards and four touchdowns in a 45-3 win over Thomasville.

Jacobi Haynes, King: Threw two touchdown passes and ran for another in 40-6 win over Arabia Mountain.

Davis Ledoyen, Dunwoody: Threw for 117 yards and four touchdowns in 37-0 win over Chamblee to earn sixth consecutive victory Battle for the Golden Spike.

Keaton Mitchell, ELCA: Carried 20 times for 169 yards and four touchdowns in a 42-0 win over Heritage.

Tate Rodemaker, Valdosta: Quarterback completed 13 of 17 passes for 205 yards and four touchdowns in a 54-3 win over Columbia.

Kolin Rogers, Darlington: Rushed 21 times for 151 yards and one touchdown in 38-28 win over Sonoraville.

Arliss Sutton, Coffee: Defensive back had 11 tackles, one for loss, forced a fumble and intercepted a pass in a 21-7 win over Ware County.

Brock Vandagriff, Prince Avenue Christian: Completed 30 of 44 passes for 321 yards and two touchdowns, despite breaking his fibula on the third play of the game.

Tee Webb, Cartersville: Completed 10 of 11 passes for 189 yards and two touchdowns in 47-0 win over Luella.

Ricky White, Marietta: Caught 10 passes for 99 yards and one touchdown in 28-9 win over Collins Hill.

Noah Whittington, Peach County: Carried 10 times for 135 yards and one touchdown in 40-17 win over Lee County.

Matthew Williams, Sandy Creek: Threw for 255 yards and three touchdowns on 13-for-16 passing in 47-3 win over Hampton.

Jacquez Williams, Redan: Ran for four touchdowns, one an 87-yarder, in a 44-0 win over McNair.