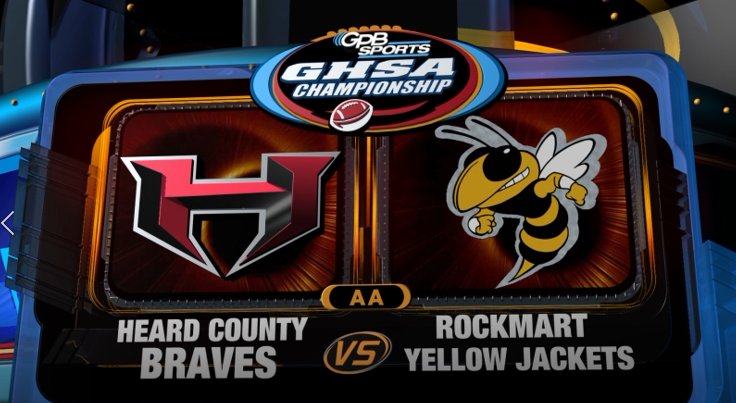 It is the first football championship won by Heard County (13-2) and avenged a 33-6 regular-season loss to Rockmart.

Beasley got the only touchdown of the first half on a 2-yard run and added the team's final touchdown on a 1-yard run in the fourth quarter. Beasley rushed 31 times for 147 yards.

Huzzie scored on a pair of 1-yard runs. Huzzie carried 10 times for 33 yards and completed 2 of 6 passes for 13 yards. He was sacked twice and threw an interception.

Rockmart (14-1) scored its only touchdown late in the final quarter on a 21-yard pass from Dylan Beasley to Juke Boozer. Beasley completed 9 of 20 passes for 114 yards and had two interceptions. Boozer caught five passes for 100 yards. Rockmart could never effectively run the ball, rushing for 85 yards on 36 carries, a 2.4-yard average.

Heard County was led defensively by Jai Wright, who totalled nine tackles and shared a sack with Kezman Kelly. The Braves had eight tackles for loss. Lequincy Shepard had two interceptions and broke up three passes.

Rockmart's deefe got nine tackles from Kieron Roberts and a pass interception from Paine Culver.