The Region 8-6A Championship will be decided tonight on GPB as the Dacula Falcons play host to the Lanier Longhorns. With it will come a No. 1 seed in the GHSA State Playoffs which start two weeks from now. This is no small thing. A No. 1 seed means a team gets to play its playoff games at home the first two rounds and possibly all four rounds leading up to the state championship games at Mercedes-Benz Stadium. As you can see, it’s a big prize!

Dacula is going for its third straight region title and its fourth in five years. The Falcons have not skipped a beat under first-year Head Coach Clint Jenkins. He moved-up to the head job from defensive coordinator when Tommy Jones left to start the program at Cherokee Bluffs. It was the “perfect fit” for Dacula and Coach Jenkins who has been at the school since 2011 and he calls Coach Jones one of his best friends.

Jenkins comes from a coaching family. His dad worked with the legendary Nick Hyder at West Rome and then Valdosta and “moved all over the state.” In high school, Clint and his dad ended-up at Oglethorpe County in the early 90s and helped lead the Patriots to one of the only three region championships in program history. One of the big things Clint learned from his dad was “you’ve got to have players to win.” And he has that at Dacula.

Lanier will be going for its third region title tonight but its first since 2015. The Longhorns are a relatively new program with a great 57-23 program record since starting in 2010. Lanier won back-to-back region championships in 2014-15 putting together an incredible 22-2 record in those two seasons. Those were Korey Mobbs first two seasons as head coach and this is his fifth season as the top guy. But it’s also his ninth season at the school since following Coach Billy Wells from Collins Hill to start the program.

The first couple of seasons, Mobbs says he and Coach Wells used to ask each other “what have we gotten ourselves into?” But now we know the answer, a program in Sugar Hill capable of competing for region championships on an annual basis.

Of course, it goes back to having players and in the last five years the Longhorns have produced major college prospects like Derrick Brown, who was one of the top defensive line prospects in the nation when he signed with Auburn, is now a junior DT for the Tigers and will speak to the Longhorns before tonight’s game. There’s also sophomore linebacker Tyler Taylor at LSU, Wake Forest redshirt freshman defensive lineman Mike Allen and senior linebacker Michael Shaw who holds the Georgia State career record for tackles-for-loss.

Jacoby Sharpe – 6-3, 240-pound, senior. 3-Star defensive end. Committed to Temple July 4 over 10 other offers. Unfortunately injured and out for the season after needing arm surgery. 9 TFL and 5 sacks in just 4 games before being hurt.

Kevonte Polk – 6-0, 185-pound, senior cornerback. Committed to Navy in September over an offer from Air Force. Moved from RB to CB this season. Coach Mobbs: “The kind of kid you would think would be committed to Navy. Awesome. Vocal leader.” 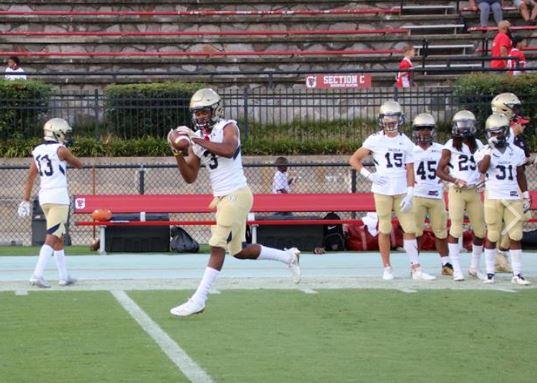 Jalen Perry – 6-1, 188-pound, senior. 4-star. No. 19 CB in the nation. 21st-ranked prospect in Georgia. Decommitted from Georgia October 4. 21 offers. Michigan and South Carolina considered his leaders. Offensive Stats: 18 catches for 209 yards, 2 TD. 16 carries for 136 yards, 1 TD. Coach Jenkins: “When we want to score a TD, we get Jalen the ball.” Defensive Stats: 2 INT. Jenkins: “Teams just don’t throw to his side of the field. He’s so versatile he would play nickel back right away or even safety.”

Should be another great Football Friday in Georgia live from Barron Field. Two teams playing for a trophy and you can’t ask for better than that! Our coverage starts at 7  p.m. Make your plans to join us!