On the other hand you have the Marietta Blue Devils. This team is loaded with future college football talent and as Rome Coach John Reid told me, “Probably four or five guys that have a chance to play in the NFL.” And that’s not hyperbole coming from Coach Reid. He knows of what he speaks. His team has won back-to-back 5A State Championships and 33 consecutive games. He knows big-time talent. Randall Cobb with the Green Bay Packers is one of his former players from his days at Alcoa High School. He had five players off his state championship team sign major college scholarships including DE Adam Anderson who was one of the top prospects in the country and now at Georgia. So we’re not just blowing smoke.

So that begs the question. Why are the Marietta Blue Devils just 1-4 on the season? For one, they’ve played one of the most difficult schedules in the nation including the aforementioned Rome Wolves. The Blue Devils four losses have come against teams that are at the very least ranked top six in their respective states and all four are Top 40 in the Max Preps national rankings. The other explanation is a little bit more difficult to gauge.

This is a program embroiled in controversy before the season started and even afterwards. The GHSA stripped Marietta of its eight wins from the 2017 season for using ineligible players. A number of key players were ruled ineligible for this season (two in particular on defense) and others exited the program altogether. Even with all that, the Blue Devils still have a roster that would be the envy of 99.9 percent of the programs in the nation and there’s not a roster in the state with more offensive talent than Marietta.

Both these programs are led by coaches who were champions of near, if not, legendary status from where they came. Blue Devils Coach Robert Morgan went 164-20 in 14 seasons at Virginia Beach’s Oscar Smith High School, won two state championships and cranked out college prospects season after season before he arrived at Marietta in 2016. Jim Bob Bryant is in his first season at North Paulding. Before he joined the Wolfpack he went 167-42 in 15 seasons in North Carolina and won three state titles at Havelock High school.

One more interesting twist to this ballgame. Marietta has never beaten North Paulding. The Wolfpack are 4-0 in the series, all played in the last four years, and last season embarrassed the Blue Devils 49-14 who were playing without their injured star quarterback Harrison Bailey. I’m sure that has not been forgotten. 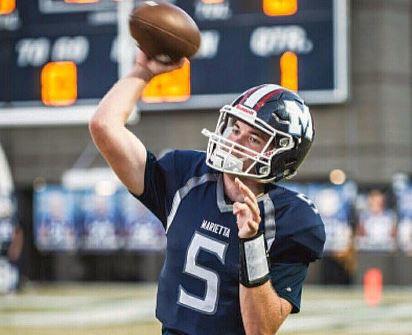 Arik Gilbert – 6-5, 248-pound, Junior. 5-Star. Number 1 ranked athlete in the nation in the Class of 2020. Top-ranked overall junior prospect in Georgia and sixth-ranked overall national recruit. Georgia considered his leader over 24 other offers.

Harrison Bailey – 6-4, 217-pound, Junior. 4-Star. Number 3 ranked pro-style quarterback in the nation in the Class of 2020. 7th-ranked overall junior prospect in Georgia. Alabama, Michigan and Tennessee considered his leaders over 17 other offers.

B.J. Ojulari – 6-4, 215-pound, Junior. 4-Star. Number 5 ranked defensive end in the nation in the Class of 2020. 10th-ranked overall junior prospect in Georgia. Oklahoma considered his leader over 15 other offers.

Ramel Keyton – 6-3, 182-pound, Senior. 4-Star. Number 21 ranked wide receiver in the nation in the Class of 2019. 12th-ranked overall senior prospect in Georgia. Committed to Tennessee in May over 25 other offers.

C.J. Swan – 6-0, 220-pound, Senior inside linebacker. Committed to UT-Martin in July over two other offers. 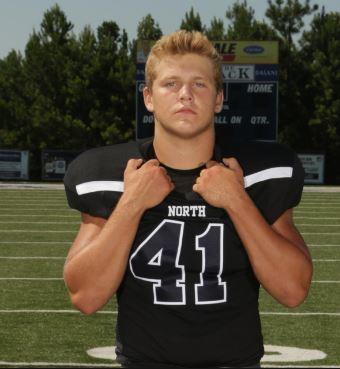 Join us for another Football Friday in Georgia on GPB as the North Paulding Wolfpack take on the Marietta Blue Devils at historic Northcutt Stadium. Our coverage starts Friday at 7 p.m. with Brian Jordan, Jon Nelson, Sam Crenshaw, Chelsea Tafoya and me. Should be another memorable Friday night.