Marietta Appeals Denied And It Was The Right Decision

The season has not started well for the Marietta Blue Devils. In the past month the team expected to contend for the 7A Championship has had to forfeit eight wins from the 2017 season for using ineligible players last year. The athletics director was forced to resign. The school was fined thousands of dollars. Two key members of their secondary were banned from playing this season and the team has started this season 0-2.

The last part of that might be the least concerning. Both Blue Devils losses were to great opponents and have no bearing on the region standings. Marietta dropped its opener to two-time defending 5A state champion Rome 51-41 in the Corky Kell Classic and this past Friday night lost to No. 7 nationally-ranked Good Counsel, Mary., 40-28. The concern in the two losses is that the Blue Devils gave-up 91 points and it was confirmed Friday by the GHSA that those two key members in the secondary won’t be playing this season.

Those two players are Rashad Torrence, a four-star junior who is ranked the No. 14 safety in the nation in the Class of 2020 with 21 offers. The other is Dawson Ellington, a three-star junior athlete who plays cornerback for the Blue Devils and has 13 offers. They both have offers from Alabama, which tells you how talented they are.

Last Monday, a Cobb County Superior Court Judge ruled that those two players and a third, junior Jalen Hardy, had been denied due process by the GHSA and deserved a hearing before the board. They got those hearings Friday morning. The GHSA upheld its decision on Torrence and Ellington, but reinstated Hardy.

A source close to the situation tells me that Torrence and Ellington remain non-complaint with the GHSA’s rule that you must live in the school district in order to participate in any of the organization’s sponsored extracurricular activities, from football to one-act plays. According to that source, one of the players lives in Paulding County and the other lives in the McEachern school district.

So while the two students are eligible to attend Marietta High School because they have a parent that works for the school system, they don’t meet the extra requirement stipulated by the GHSA that they must live in the school district to participate in sports.

Now, I don’t understand that rule. It seems to meet that if a school system says you can attend a particular school (in this case Marietta), you ought to be able to enjoy all the same benefits that all the other students get to enjoy. But that isn’t what is in the GHSA rule book.

You can make the argument that it was the school’s fault for reportedly misleading the students that they were eligible to play last season. That’s what the attorney for the players has contended. But it’s hard to make the argument that they should be reinstated when for months now, they’ve known what the rules are, yet remain non-compliant, living outside the school district. They’ve had time to either move into the district or attend the school in the district where they live, but according to my source, they have apparently done neither. 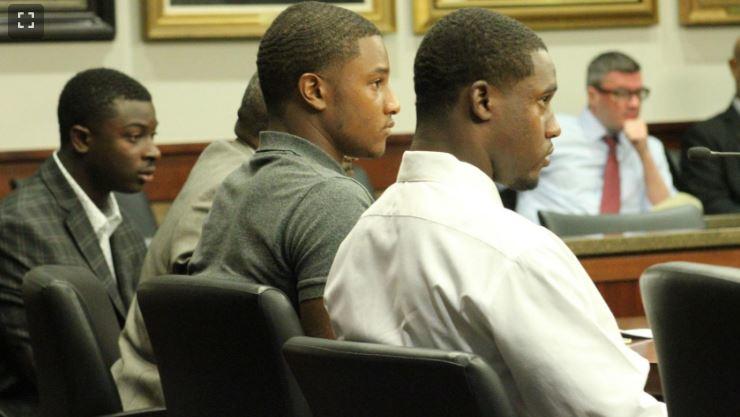 herefore, in their appeal to the GHSA, they were asking the organization to ignore its long-standing rule and allow them to play even though they would continue breaking the rule by doing so. There was no way the GHSA was going to allow that and I don’t blame them. Imagine the Pandora’s Box that would open.

I have sided with the players throughout most of this saga. After all, I didn’t think it was fair that they be punished if indeed they had been misled into believing they were eligible to play. But they’ve known for months now that what happened last year was in violation of GHSA rules yet they’ve apparently done nothing to make that right here in 2018, as in move into the Marietta High School district or go back to the school in the district where they live and make a hardship appeal to play there this season.

The one player who was reinstated, Jalen Hardy, did move into the Marietta High School district. He met the GHSA requirements and he’s now back on the team. Although I can’t speak with certainty, using Hardy as the example, I’m guessing that the GHSA would have strongly considered Torrence and Ellington’s eligibility appeal had they also moved into the district.

Rules are rules, whether we like them or not. Like I wrote several weeks ago, if you don’t like the rules, don’t just break them and hope for the best. Seek to change them.