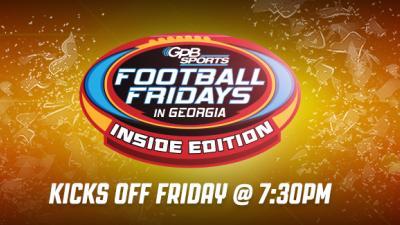 Last Friday GPB Sports debuted a brand new show called, Football Fridays in Georgia: Inside Edition, and this week we will once again be in-studio, at tournament central, to bring you as many scores, games highlights, and high school football news as is humanly possible. The goal, is to visit as many games around the state as we can, utilizing the local high school productions of their game broadcasts and then adding in interesting features and interviews to the show. This week, Sandy Creek head coach Chip Walker will be joining us. Chip is entering his 12th season as head coach of the Fighting Patriots. He has posted a remarkable record of 119-23-1, and along the way won three state titles in 2009-10-12. He is also half of the first father-son combination to win state titles in Georgia, teaming up with his dad, Rodney who won 300 games during his coaching career. Jon Nelson will profile two outstanding quarterbacks in Houston County’s Jake Fromm who is one of the top rated players in the entire county. He will also visit Brunswick, Georgia, and Glynn Academy’s outstanding two-way player DeeJay Dallas. Sam Crenshaw will be on hand to bring us up to the minute on the latest recruiting news and Jackie Brittain will profile Walton High School quarterback Addison Shoup in her year of the quarterbacks series. Jackie will also keep us posted on the world of social media so be sure and send us in your photos and comments from the games you are at so we can interact with you during our show. So join us at 7:30 this Friday night as we span the great state of Georgia for the top games, best plays, and most talented players in this week’s Football Fridays in Georgia:Inside Edition.