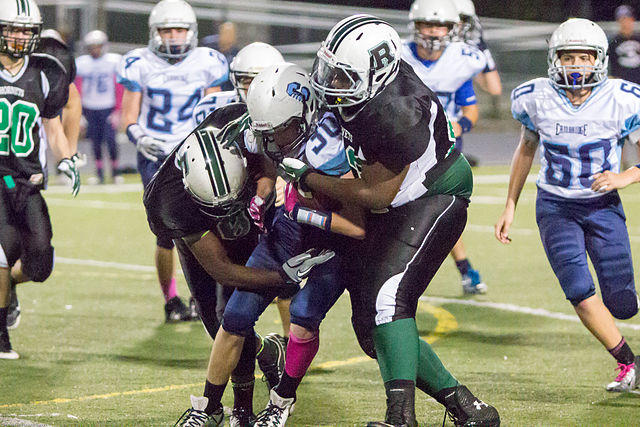 I am so looking forward to kicking off our 2015 season on GPB this Friday night when the Roswell Hornets host the Lowndes Vikings.  This will be just the third ever meeting between these two teams from different worlds in Georgia high school football.

Lowndes is a five-time state champion from Valdosta.  Plays in Region 1-AAAAAA often referred to as the SEC of the GHSA.  Roswell has by-and-large been an average program in the north Atlanta suburb with an occasional spike, the greatest coming back in 2006 when the Hornets won their third state title.  But under third-year Head Coach John Ford this Roswell team appears to be heading toward another spike with a team loaded with prospective college football talent.

This will be Lowndes first-ever visit to Roswell but before you feel sorry for the Vikings’ 4-hour bus ride to Atlanta (and the traffic snarls they’ll no doubt endure starting somewhere around the Tanger Outlets in Henry County) take into account this is one of only THREE road games Lowndes will play during the regular season and won’t have another until October 9th and then again not until November 6th.  I think they’ll survive.

Now to the Players to Watch:

Let’s start with Roswell and senior linebacker Tre Lamar.  I was at the Hornets pre-season game this past Friday night and someone in the press box pointed out Lamar and said “now that’s what a high school linebacker looks like.”  I didn’t correct him but at 6-4, 240-pounds Lamar is actually what a major college-ready, one day headed to the NFL linebacker, looks like.  Ranked by ESPN as the #3 inside linebacker in the nation, Lamar committed to Clemson back in July, choosing the Tigers over Alabama, Auburn and many others.  He plans to enroll in January.

Lamar’s linebacker partner senior Tyrone Hopper (6-3, 202) is committed to North Carolina.  A native of Shelby, NC who moved to Georgia when he was eight years old, Hopper chose the “home state” Tar Heels over 11 other offers including Mizzou and Tennessee.  He is rated by ESPN as a 3-star linebacker.  His younger brother TE/DE Tyneil Hopper (6-1, 200) is a sophomore who has already received an offer from Kentucky but is really just a back-up right now and we might not see too much of him.

Roswell junior cornerback LeAnthony Williams has 16 offers including Georgia, Alabama and Auburn but told recruiting reporters he’d really like to hear from Florida State.  ESPN rates Williams as a 4-star and it’ll be interesting to see what kind of impact he’ll have in this game against a Lowndes team that is shifting from a traditional Wing-T offense to a spread.

Williams has plenty of help in the secondary on the back line with safeties Marcelino Ball and Xavier McKinney.  Ball, who is a senior, is the youngest of the famous family that has produced past Stephenson High School stars Reggie (QB Georgia Tech), Raeshown (Chattanooga) and Marcus (FSU/Memphis and now Carolina Panthers).  Marcus was one of the most dominant high school players I’ve ever seen and Marcelino is compared to him. Yikes!

Marcelino’s dad Reggie, Sr is still coaching at Stephenson but Marcelino is living with his mother and “making a name for himself” at Roswell.  Ball has been offered by West Virginia, Georgia Southern, Georgia State and App State.  McKinney is just a junior but already has offers from Alabama, Clemson and South Carolina.  As you can see Dabo Swinney is hoping that Tre Lamar connection creates a pipeline that also funnels Williams and McKinney up there to Howard’s Rock.

To this point all the Roswell players we’ve talked about have been over on the defensive side of the ball.  Over on offense watch for new quarterback Quintarius Neely who transferred in from Lovejoy where he was the starter last year as a junior.  He has an offer from Army.  6-3, 290-pound senior Cameron Whiteman leads the way on the offensive line and is committed to Harvard.  Whiteman will join 44 former Georgia high school stars already playing in the Ivy League (it isn’t just about the football big boys but the academic big boys too!).  Whiteman helps block for junior running back Sheldon Evans, who rushed for over 1,900 yards and scored 21 touchdowns as a sophomore on the Hornets’ 8-4 team.  He doesn’t have any offers yet.

I haven’t had the pleasure of witnessing Lowndes in person yet but I know they whipped Norcross pretty good two weeks ago in their pre-season game at Martin Stadium.  The Vikings rushed for over 200 yards (in that new spread offense) in just three varsity quarters and held the Blue Devils to just 56 yards of total offense in their new 3-4 defense.

Starting his 14th season as head coach, Randy McPherson has seven new members on his coaching staff including new coordinators Tucker Pruitt (offense) and David Shores (defense).  Missing the playoffs last season for the first time since 2006 didn’t sit well with the Vikings.  The last time that happen, Lowndes came back the next year (2007) and won their fifth state championship.

On paper, the Vikings don’t have the recruiting prospects the Hornets do.  Tight end Gabe Nabers is committed to Georgia Southern.  He’s filled out nicely and is now a 6-4, 240-pound senior.  He tied for the team-lead with 12 catches last year.  The transition to a spread should help him with the Vikings and in the future with the Eagles where he could become a real weapon in Coach Willie Fritz’s spread option offense as a tight end who can block on the edge, flex out, line-up at H-Back and catch the ball in Georgia Southern’s developing passing game.

The Vikings have a couple of big (as in size-wise) prospects on the offensive line.  6-3, 300-pound senior Tarik Adams is committed to Marshall and transfer Nate Lee who is a 6-5, 310-pound senior.  Lee doesn’t have any reported offers…yet.  But after transferring into the higher-profile Lowndes program from Veterans HS in Warner Robins that’s highly likely to change.  I’m no Jamie Newberg but 6-5, 310 will get a scholarship offer to somewhere.

Again…really looking forward to getting things started this weekend.  The great thing about my job is you get to share in the fun.  I invite you to join us for Lowndes at Roswell, 7:00 p.m. start Friday on GPB.  We’re in every TV in the state and of course you can watch us on the GPB app as well.  Let’s do this!