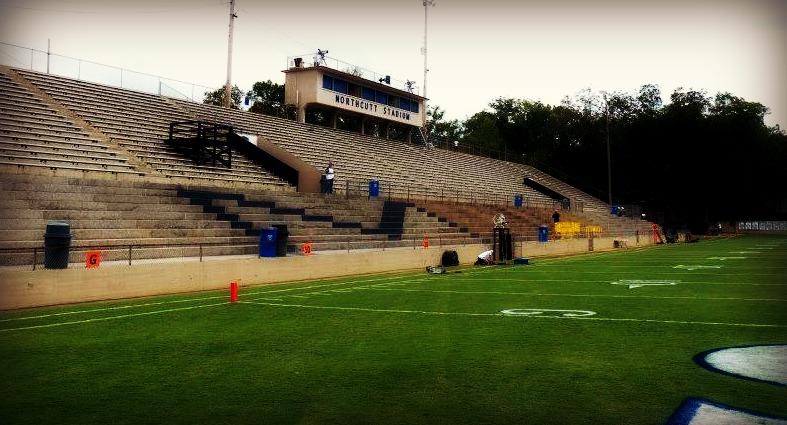 Here at GPB Sports we live, think, and breathe high school sports all year long. So this week, Director of Operations Kevin Gerke and I hit the trail to Marietta High School to check in on the renovation job going on at historic Northcutt Stadium. Now, just to bring everyone up to date, Northcutt Stadium was built 75 years ago, commissioned as a work project for President Franklin D. Roosevelt’s WPA program. The workers graded the field to help with drainage, they built stands, installed lights, and most uniquely of all, built a reticulated rock wall around the entire stadium. This year’s 11.3 million dollar renovation will include reworking the home stands, completely erecting new seating, new lights, a huge new press box, and remodeling the home side and visitors entry way. As we speak, concrete is being poured as the visitors stands are renovated. The Marietta football program is one of the oldest in the state. The first team to represent the Blue Devils hit the turf in 1902 and since that time, the Blue Devils have posted 554 wins, 380 losses and 27 ties. Marietta has won 15 region titles and the state championship crown in 1967. And now, a new era is on the rise. Back in the day, Guy Northcutt who oversaw the WPA project, said of the WPA Workers: “They did something that will last for generations” The same can be said of the current crew of construction workers, engineers and architects as the new Northcutt Stadium gets ready for the opening kickoff of the 2015 season. Everything is scheduled to be wrapped up by July 19th. The new stadium will boast 5700 seats and those stands will be rocking when the Blue Devils kick off their new digs on September 4th as the Newnan Cougars roll to town.