The Queen Of Queens 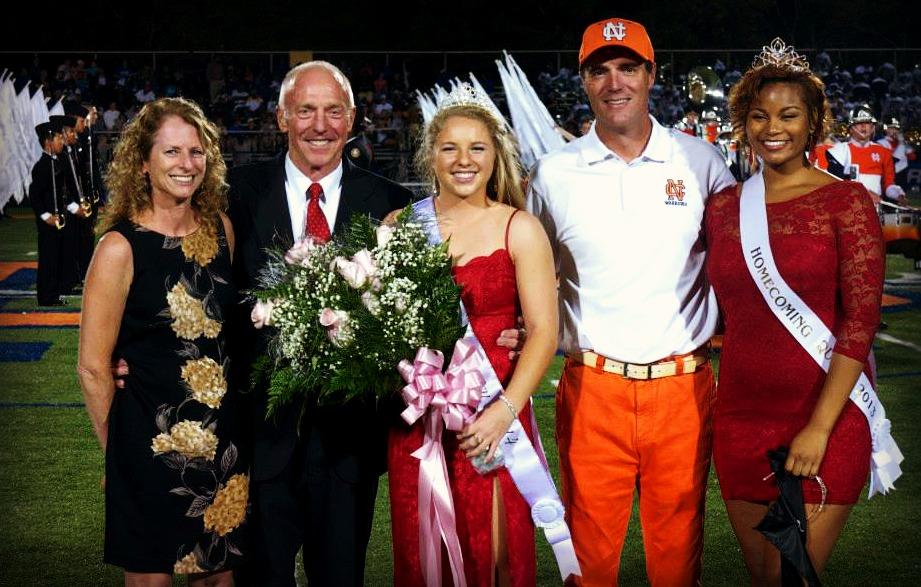 It's October. Hayrides, haunted houses and Halloween pack the month with festivities. And in the world of a high-schooler, homecoming makes those leaf-turning days even more jampacked with fun. So, time to pick out the perfect date…the perfect shoes, the perfect dress. And if you're selected as a member of the homecoming court, the apparel is all the more important. But for recently crowned queen of North Cobb High, Regan Jackson, department stores and dress shops will have to wait for her business until prom season rolls around…if that. A visit to her closet, where her late aunt's dress collection lives, was as far as she needed to search for her perfect homecoming game dress. In her closet lives an assortment of flawless gowns that symbolize a very special friendship. Regan's aunt and inspiration, Katie Trammell, passed away this past spring following an eight-year battle with breast cancer. Katie annually attended the Marine Corps Anniversary Ball with her husband Bill, a member of the military. A tradition was made of handing her gowns down to Regan and her sister. Her hope was that they would someday find occasions in which to wear them. You could say Regan found that perfect occasion: the center of North Cobb's football field during halftime last Friday night, as one of four seniors ladies selected to the 2014 court. Escorted arm-in-arm with her father and dressed in one of her Aunt Katie's red ball dresses, the Jackson family beamed when a sparkling crown was placed atop Regan's blonde hair, as she was announced North Cobb's 2014 homecoming queen. I had the pleasure of interviewing Regan just minutes after her crowning. But after our interview, she gave me the backstory about her evening gown as her memory held tight to the woman she so adored. "I know she is in a better place now and is no longer suffering," Regan said. Regan couldn't have been more proud to be chosen by her classmates as the Warriors newest homecoming queen but doing so with the memory of her aunt close by was in her mind, the most special part. "The best part of Friday night was knowing that I was wearing my gown in memory of my aunt. When anyone told me how beautiful my gown was, all I could think of was how it represented how beautiful my Aunt Katie and her story are," Regan explained. To say that Regan is involved at North Cobb is certainly an understatement, as she spends her time outside of class playing five...yes, five sports; participating in student organizations and studying. But on top of all of that, she makes the time to rally as a member of Relay for Life, raising funds and awareness for cancer research and supporting those battling the disease. "Throughout my Aunt Katie's battle she taught me the true meaning of strength and optimism. No matter what, she always stayed positive. Katie is my inspiration for being in Relay For Life. She is my main motivation to keep raising money along with several other of my family members who have or had cancer," said Regan. While Aunt Katie is no longer with Regan and her family here on earth, the memory of the positivity and joy that she contributed to the world will certainly provide Regan with a shining light, as she continues her journey beyond those high school walls, courts and fields. Watch below for Katie's court introduction and interview on GPB.