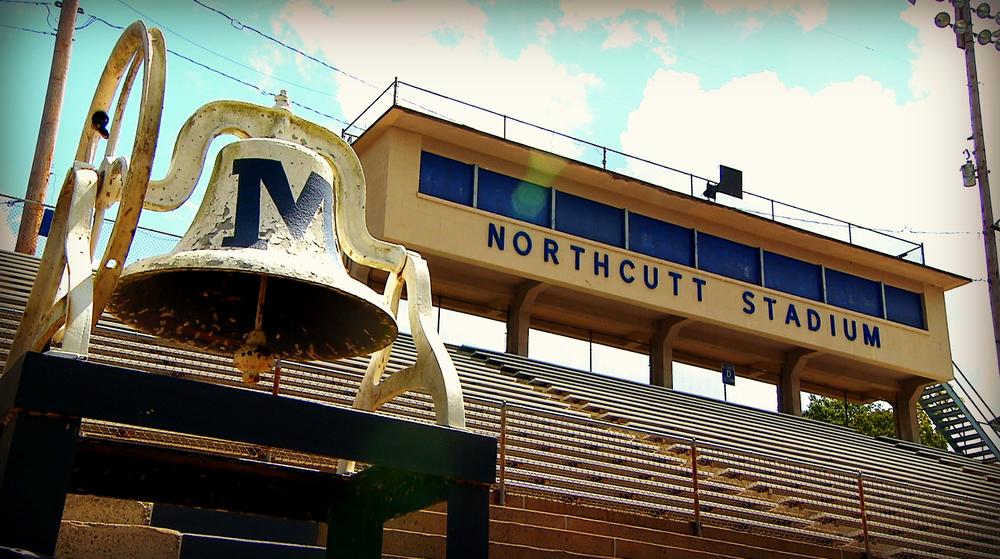 This week, GPB’s Football Fridays in Georgia team heads to historic Northcutt Stadium, where the 2-2 Marietta Blue Devils host the 2-2 Hawks of Hillgrove. The competition we'll see in this one should have your eyes glued to the TV, as both teams have shown they can light up a scoreboard. Marietta is averaging 32 points per game, while the Hawks are putting up 27 points per contest. But the real star of this game might be the stadium itself. Construction of the Marietta sports staple began back in 1939. It was one of FDR’s New Deal WPA building projects. The stadium holds 5,217 fans and has hosted years of high school football history. The Marietta Blue Devils have won over 550 games since beginning the program back in 1902, including the 1967 state championship team. After the final game this year, the visiting stands will be torn down and a new set constructed. The home seating will be moved back, allowing the teams more room on the field, and the press box will get a makeover. The folks at Marietta are understandably excited about the upcoming refurbishing. As for our telecast, Grace Olson will have a can't-miss story in the All-Access Pass pregame show about the history of Northcutt Stadium, featuring former Blue Devils that took French Johnson field in the venue's first years. Jon Nelson has a report on the Region of Doom: Region 1-6A, where all six of the region's southern schools remain unbeaten! That will certainly change though next week when they start playing each other. Matt Stewart will bring you the latest recruiting news and Larry Smith rejoins the GPB Sports team to help call the game and add his expertise to our pregame "Chalk Talk" segment. My co-host, Claire Simms, will deliver insight into an outstanding Fulton County organization called Future Foundation, that helps teens at extremely high risk of dropping out of school find success. So join us Friday night at 7pm for Week 5 of Football Fridays in Georgia, live and in living color from Northcutt Stadium as Marietta hosts Hillgrove...only on the great GPB!