Rush To The Top 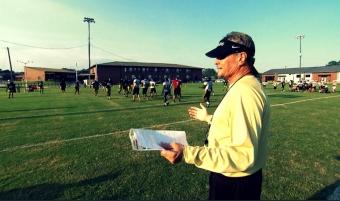 With another year, comes another loaded football schedule for Colquitt County. While the Packers naturally have their work cut out for them, facing a daunting built-in schedule in the highly competitive Region 1-6A, Head Coach Rush Propst will again abide by his philosophy of stacking a regular season opponent lineup that takes no prisoners. "We've got Lowndes and Camden and Lee County as our home games. We travel to Valdosta and Tift ah so you know, it's tough. It's a tough region…it's a war every Friday night," said Propst. In addition to in-state competition, Propst and crew will face national powerhouse Hoover High from Alabama on August 29, a team looking this year for its third state title. "I can't see there being a game more important in the state of Georgia than that one….only because Hoover's...you know, they won thirty in a row. They're back-to-back and looking for a three-peat," said Propst. And when that varsity roster steps off the bus in Moultrie, Coach Propst will already have a pretty solid idea of the names he sees on their jerseys. "This group of kids I know very well because I watched them play as fourth graders and fifth graders. They never lost a game in their whole career," added Propst. A nine-year, five state title-winning stint at Hoover has him closely connected to this matchup, which is followed by another battle of the borders. For this one, it'll be the Packers loading up the buses. "We go to Enterprise over there and play a team in Alabama that I feel like is a natural rivalry because Enterprise to Moultrie's only about two hours…it's not very far. Communities are very similar. "I think it's good to play teams out of Alabama. I think it's good to play teams out of Florida. When we play our inside of our region games, if us and Lowndes plays, it's gonna be a packed house. If us and Valdosta plays, it's gonna be a packed house. Us and Camden plays--packed house. But those out of state games are important for fan interest. And your best teams in the country do it." As Coach Propst leads his seventh Colquitt County team into the 2014 season, outside chatter wonders when that first region championship will find its way into the Packers hands. But Propst couldn't care less about that particular title. Its only purpose to him is the seeding it strings along with it. "We won several region championships at Hoover…I don't even know where the trophies are. Matter of fact, they're stuck in a box somewhere. We have talked more this summer about winning the region to get us home playoff games for our fan base. The way this state sets it up, you're better off being a number one seed because you don't have to travel as much (during the playoffs.)" In recent years, Region 7 and Region 8 have proved quite a test for the title in the highest classification, with Norcross winning back-to-back championships in 2012 and 2013, while Grayson and Brookwood won it all the two years prior. The last state title won in the highest class by a team from South Georgia was Camden County in 2009. This is a tide Coach Propst isn't shy about trying to turn. "Let's get that 6A title back to South Georgia," Propst announced at South Georgia Media Day in 2013, as he spoke about the depth of teams in Gwinnett County. While it didn't happen in 2013, 2014 offers up another shot. This round of media day speeches in Valdosta had Propst zeroing in a little more on Region 8, as the McEachern Indians enter the season ranked No. 1 in Georgia. "Region 1, Region 7 and probably Region 8 are the deepest regions in this state and that's where the state championships have come out of. Now, McEachern is gonna have to be reckoned with. I feel like they're probably one of the top two or three teams in the state." While Coach Propst tries to work his team to the top, he's doing so under the frame of mind that complexity in scheme need not be abandoned for the high school player and that the advantages of today's technology can play a huge role in making that work. "I think the game…it's a lot more complex now than it was even ten years ago. And multiplicity and scheme is probably the key to it because we're in the age of the computer. With the use of laptops, iPads and to be able to use them on the sidelines and things…we do a good job with it." The around-the-clock nature of football only intensifies with the burgeoning technology, and that's not limited to the college and professional ranks. "They have a Hudl account number so kids can go home and on their iPhones and on their laptops and they can study practice tape. You're spending probably five, six hours a day with them so at least an hour and a half, two hours of that is studying game footage and practice footage and all that kinda stuff. That allows you I think to be more complex in what you do." Watch below to hear from the Packers head coach: