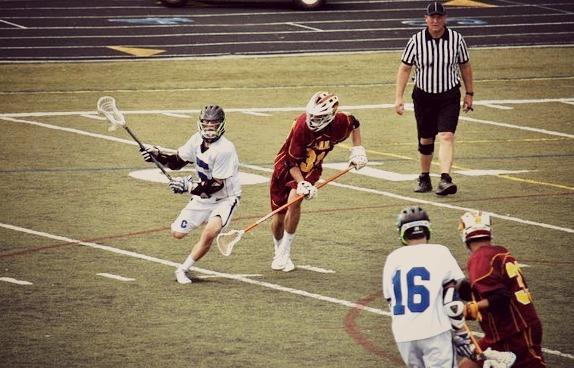 Spring sports are underway throughout the state of Georgia and one of the sports rapidly gaining popularity is lacrosse. One of the state's top boys team is Centennial, the defending 6A state champs.

Coach Bryan Wallace has put together a juggernaut of a team. The Knights return seventeen players from last year’s state title team, including 8 of 10 starters from 2013. Those eight athletes are all seniors, three are All-Americans and six All-Staters. Now that’s what I call star power.

The Knights are ranked number one with a 6-1 record right now. The team will play eighteen regular season games and if they can win it all, 4 more contests are to follow in the playoffs.

Leading the way is senior Nathan Solomon, who is the reigning Georgia player of the year and Syracuse commit. By the way, I spent part of my career in upstate New York covering Syracuse and the Orange's lacrosse program is second to none.

Austin Skorb has played solid in goal and Ryan Carvin and Brenden Spence add to the Knights' offensive firepower. In fact, Coach Wallace told me his team plays a very up-tempo style of lacrosse, much like up-tempo basketball with alley oops and dunks. Coach Wallace says its a lot like last year's NCAA Tournament darling, Florida Gulf Coast, who earned the nickname "Dunk City."

In the three years and fifty-seven games the Centennial head coach has been at the controls, the Knights have scored in double figures in every game but one. Right now, they're averaging 18.2 goals per game and are ranked fourth in the Southeast.

Surprise, surprise, the Knights are the team to beat once again this year. Coach Wallace attributes a lot of this year’s success to a bunch of guys who have strong team chemistry, enjoy each other's company, play well together and have a high lacrosse IQ.

The march to the playoffs will begin with the first round of the tournament on May 6th and the GHSA Lacrosse Champions will be crowned on May 17th. Good luck to the Knights as they try to win back to back titles in Class 6A.