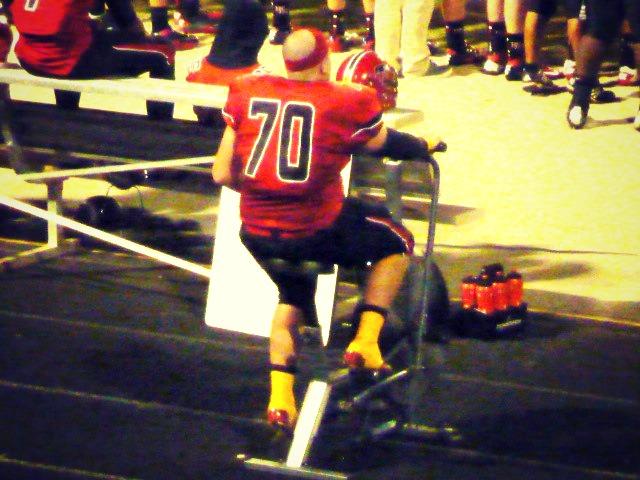 High schoolers experience challenges of all kinds. But Flowery Branch students may feel that some of the challenges they thought to be big are actually somewhat small when compared to the trials faced by senior Keaton Coker.

A senior guard on the Falcons football team, Keaton experienced a seizure in the summer of 2012. A brain tumor was soon discovered and the Coker family eventually learned that the youngest of their three sons had brain cancer.

An incredibly strong sense of spirituality within the Coker family and a rally of support by the Flowery Branch community are what Keaton's mother, Sharon Coker, describes as being the driving forces behind Keaton's strength.

"It was definitely quite a shock when we found out," said Sharon. "Our preacher, Tom Smiley, has always said, 'It's not IF you will go through a trial, it is WHEN you will.' "So, we knew this was WHEN!"

Football seems to have provided a strong sense of normalcy for Keaton throughout all that life has thrown his way this past year. A sense of team, commitment to a common goal and pure love of the game have made football an instrumental element throughout Keaton's journey. His head coach, Chris Griffin, says Keaton's dedication has been truly astounding, as he has not missed a game nor a practice since he first learned of the tumor.

While Flowery Branch is Keaton's team, the greater Gainesville community has played a large role in supporting his cause. The Coker family is constantly surrounded by rival Gainesville High fans and students. His father, in fact, was a Red Elephant throughout his days on the high school football field. Gainesville happens to be the Falcons' last regular season opponent and a huge rival at that.

But while each team pulls for a win on Friday nights, they're all pulling for Keaton.

This past week, the Coker family found out that Keaton can come off the chemo medicine; he is cancer-free!

A feeling of belief has turned to one of relief for the Cokers. "I said 'Thank you Jesus' and did a happy dance in the doctor's office!" Sharon described.

It may have been a long road for Keaton, but he'd be the last one to let you know that.

"Keaton never wanted any kind of special treatment. In fact, he would never even mention it. Something like this happens and it can knock somebody for a loop but Keaton handled it as well as you could expect anyone to handle it. It was just like, hey…it's just a tough day at practice. It's alright, I'm gonna be fine..tomorrow's a new day," said Falcons Head Coach Chris Griffin.

"I don't live like I have cancer so it's kind of relieving but nothing really changes," the senior explained.

Watch the video story below to hear from Keaton himself.