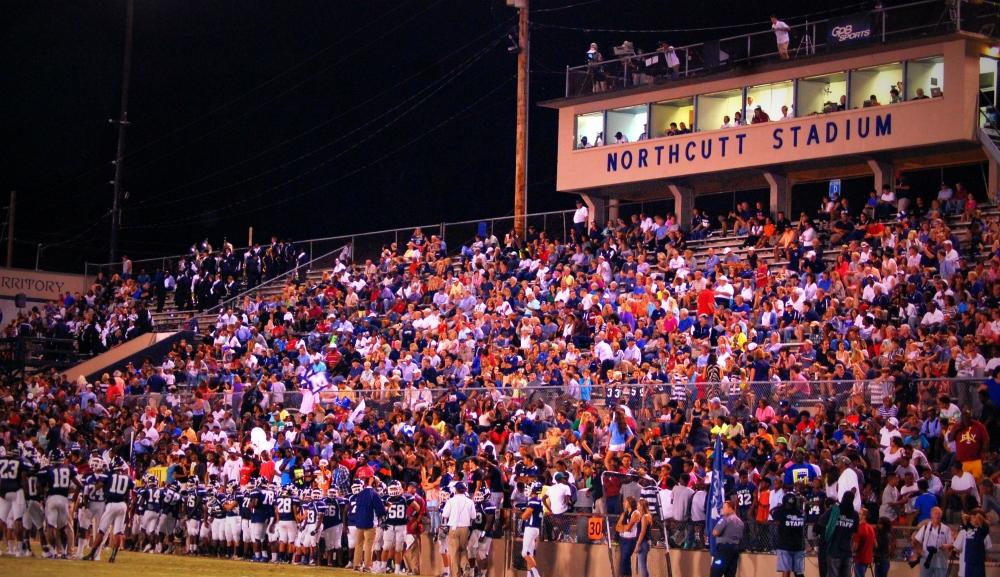 You hear it said nowadays, “That’s old school”, or “He’s new school”. It’s hard to tell sometimes what is meant by such comments. For me, being a 36-year-old, I find myself with one foot in both schools but in reality, I consider myself an old school kinda guy. I like classic rock, old cars, jeans that actually come up to your waist and an honest days’ work. As a sports fan, more specifically, a football fan, I would probably be considered hyper old school. I prefer a ‘less is more’ philosophy when it comes to uniforms (see the Steelers and Bears). I like to see hard-nosed football decided by defense and running the football. I think celebrations should be reserved for scoring plays. I like my football played on grass in the great outdoors and I LOVE old stadiums!

This past Friday, we had the pleasure of broadcasting from historic Northcutt Stadium in the heart of Marietta, Georgia. If you’ve never been to Northcutt Stadium let me describe it: It’s small, it’s hard to get to, all the paint is chipped, the press box is hot, the bathrooms are not conveniently located, the sidelines are narrow and it’s awesome!

As an old school guy and a football purist, I can’t get enough of places like Northcutt Stadium. The charm and character remind me of why I love the game of football: the smell of the grass, the communities, the families, the competition and most of all, the tradition.

Northcutt Stadium has been around since 1940. She’s seen many battles and she has endured as a symbol of high school football in Georgia. Although she will benefit from a seven million dollar facelift over the next two years, the essence of the great stadium will remain in-tact and the Marietta Blue Devils will still call her home.

In the future, more banners will hang on her wall, many more coaches will lead their teams to battle on her grass field and countless young men will have the opportunity to experience the game as young men have for eight decades.

This week, on Football Fridays, we’ll have the pleasure of visiting Hallford Stadium in Dekalb County for a huge rivalry game between Southwest DeKalb and Stephenson. SWD, which opened in 1928, will do battle with Stephenson, a school that opened in 1996. Now that’s old school vs. new school.

Hallford Stadium, which opened in 1968, was formerly known as Dekalb Memorial Stadium. It is also the place I played my final football game in 1994. That place is very nostalgic for me and holds some very strong feelings, some painful and some wonderful, but most of all, it is the setting where young men and families gather every Friday night in the fall to make memories that will last a lifetime…and that what this game is all about.

As a guy straddling the fence between old traditions and new school philosophy, I urge you to embrace these old relics. At some point soon, they will all be a distant memory and we will long for their reminders of those days gone by.