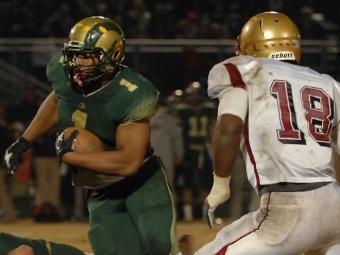 The three new entries to the list have stood out for helping their teams to the postseason. Jordan has toted the rock nearly 200 times for 1,780 yards as No. 1 Thomson looks to do some damage in the playoffs. The 5-foot-10 back holds an offer from Georgia Southern. Meanwhile, Mercer’s 1,235 yards and 22 touchdowns have helped South Effingham back to the playoffs for the first time since 2007. He is headed to N.C. State. Finally, Brendan Douglas has put Aquinas on his back for most of the year as the Fighting Irish spent a portion of the year at No. 1 in Class A before two straight losses. Douglas’ 1,369 yards and 22 scores helped Aquinas finish the regular season with an 8-2 record and a spot in the Class A-Private bracket.