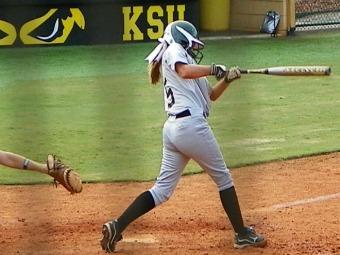 Pace Academy advanced to the Class A quarterfinals with a 9-1 win over host Pacelli in Game 3 of the series. It is the first time the Knights have made the quarterfinals in softball. Pitcher Lane Dikeman gave up one run in a complete game performance while Lindsey Zwecker and Maryellen Malone each had three hits and two RBIs. Pace Academy faces Darlington in Columbus Thursday.
Mill Creek clinched its fifth trip to the quarterfinals in Columbus in the past seven years with a 6-0 Game 3 victory over host Grayson. The fourth-seeded Hawks out of Region 7-AAAAAA used a complete game shutout by pitcher Heather Felt (10-7) to eliminate the Rams, the No. 3 seed out of Region 8. Morgan Bell went 3-for-3 with a homer and three RBIs for the Hawks, who take on No. 1 Kennesaw Mountain in Columbus Thursday.
Class AAA No. 1 Buford lost to No. 10 Franklin County Wednesday but rebounded to take the second-round series with a 9-1 win in Game 3 Thursday. Pitcher Bria Bush got the win to improve to 18-2 this year and earned her 17th complete game. The Wolves have now made the quarterfinals for the eighth consecutive season. Sophomores Jordan Deep and Tessa Daniels each homered in the fourth inning on back-to-back at-bats. Tony Wolfe's team (28-3) will take on No. 3 Jackson Thursday.
Class A No. 6 Mount Pisgah qualified for a trip to Columbus as the Patriots swept Brookstone in two games Wednesday. Courtney Condon pitched a complete game for Mount Pisgah in the first tilt, striking out eight and allowing two hits, before saving the second game for Jenn Sapp. In Game 1, Morgan Walters homered while Madison Wickline was 3-for-3. Condon and Walters each homered in the clincher for the Patriots.
Parkview was eliminated by Milton in two games during first-round play, but Panthers senior Eryn Stepp will continue her softball career at Georgia Gwinnett College next year. The senior shortstop hit .471 her junior year and .310 as a senior.