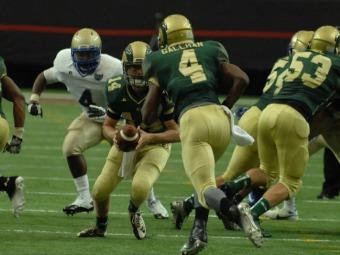 The most recent Score 44 list finds two new faces in Mill Creek’s Kelsey Griffin and Wayne Gallman of Grayson who took advantage of injuries and struggles to move onto the fluid list. Gallman has been a key cog in the Grayson rushing attack that has responded to losing to Parkview by rattling off a 3-0 record with a combined score of 142-34. The future Clemson Tiger once again found the end zone last week against Central Gwinnett and is a threat to catch a touchdown pass as well as run them in. He can also play some on the defensive side of the ball. Griffin, the four-star defensive tackle out of Mill Creek finally found a home with South Carolina after trying to commit to Georgia last month. Colquitt County’s Cole Seagraves is still playing for coach Rush Propst, but after splitting time for much of the year, he was finally taken out of the starting lineup in favor of junior Daniel Mobley. And Brookwood’s Shaun McGee’s only reason for being lifted from the list was a recent ankle injury.