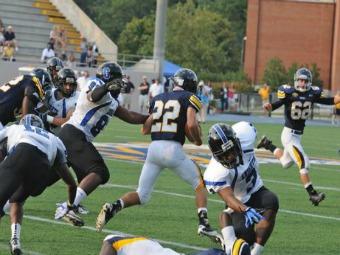 My, what a difference a weekend makes. Grayson and Walton will not finish undefeated in the regular season. The highest ranked squads in the state's largest classification looked very flawed in their respective losses to Parkview and North Cobb. Especially concerning was Grayson's inability to score on the Panthers (just seven points) and the Raiders' problems with not coming close to stopping North Cobb and wide receiver Xavier Borishade, who returned the opening kickoff for a score before adding three receiving touchdowns.

How about the Heritage-Conyers Patriots? They've made the playoffs two years in a row coming into 2012 and now they've won the Conyers Cup for the third time in a row after victories over neighborhood rivals Rockdale County and Salem. Coach Chad Frazier's squad has now entered the rankings at No. 9 with a 3-0 start.

Marist rebounded nicely from its heart-breaking loss to Thomas County Central last week by defeating fellow intown Atlanta private school Lovett. The War Eagles showed a lot of grit by coming back from a 16-7 halftime deficit to win 24-16. With its two nemeses, Tucker and Thomas County Central, in Class AAAAA this year, Marist looks like it can make a run at the AAAA state title behind dynamic quarterback Myles Willis.

Also in AAAA, defending Class AAA champ Burke County went into Region 1-AAAAAA Coffee and came out with an impressive win Friday night. After a disappointing loss to Thomson to start the season, the Bears look like they are back on track. The win over the Trojans sets up big-time showdown with No. 2 Statesboro this weekend.

Speaking of Thomson, the Bulldogs have been one of the most impressive teams early in the season. After the aforementioned season-opening win over Burke County, Thomson hosted St. Pius X Friday and came away with a quality 21-14 win. Milan Turner's team has entered elite status in Class AAA.

Also in AAA, No. 1 Peach County outgunned Class AAAAA power Warner Robins 29-24 in Fort Valley Friday. The Trojans look like the class of a stacked AAA so far and should be in the mix come December for their fourth state title since 2005.

Class AA No. 1 Calhoun had an impressive win Friday night over fellow powerhouse Carrollton. The Yellow Jackets proved they had more firepower than a quality program two classifications above them. Impressive, to say the least.

Class No. 2 ELCA has roared back after starting 0-1. The Chargers have now scored 135 points in their last three games, all wins by at least 25 points.