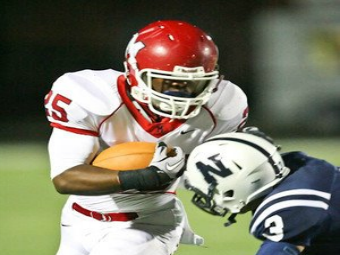 The Georgia Bulldogs and Florida Gators went head to head over the weekend for a pair of Peach State products with the Gators winning one battle and the Bulldogs claiming the other pledge. Georgia earned the commitment of Thomson High School tight end Jordan Davis. The 6-foot-4, 220-pound prospect chose UGA over the Gators, South Carolina and NC State. Meanwhile, Florida picked up the pledge of Archer's Antonio Riles. The Tigers' defensive lineman was described by his coach Andy Dyer as "a big kid with a lot of talent. He is going to anchor the defensive line for us." Riles rotates between end and tackle but will likely play tackle at the next level.

The Milton Eagles continue to churn out BCS talent as running back Peyton Barber has pledged to Mississippi over Arizona State, Clemson and North Carolina. Barber did not play last season due to an ankle injury, but the running back should be healthy once camp opens for Milton. He will be running behind an offensive line with three players headed to BCS schools.

The Ole Miss Rebels have revoked the scholarship offer of Thomasville linebacker Mario Mathis. The rising senior played all of last season on a torn ACL before having surgery to repair the knee injury in January. Ole Miss reportedly pulled the offer after team doctors examined the leg and didn't like the recovery progress.

Finally, Grayson's Korey Anderson has committed to play baseball at Western Carolina. Anderson suited up at tight end last year for the Rams as Grayson won the Class AAAAA title, then hit .314 with three home runs to help the baseball team to the Class AAAAA semifinals. He can also pitch as he has been clocked at 90 mph off the mound.