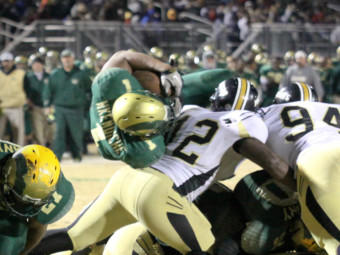 Gwinnett County released its football schedules for the 2012 season over the weekend. Six days after opening with McEachern in the Corky Kell Classic, defending AAAAA champions Grayson will host national power Miami-Central in a game that will be televised by ESPNU. GAC will kick off the season early, with an Aug. 24 game against Stone Mountain in Norcross. Brookwood, North Gwinnett and Peachtree Ridge will each take part in the Kell Classic again. In North Gwinnett's National Football Challenge, the host Bulldogs will take on A.C. Flora (S.C.), Stephenson plays Pine Forest (Fla.) and Valdosta takes on North Augusta (S.C.).

No. 5 Cartersville (10-2, 7-1) withstood a challenge from No. 8 Allatoona (10-4, 6-2) with a 5-0 win on the diamond Friday in Acworth (rankings according to GaSports.com). The Purple Hurricanes' victory gave Cartersville the lead in Region 7-AAA. Wheeler (7-11, 1-3) ended a five-game losing streak with a 10-6 win over region-rival Woodstock. Valdosta edged Tift County in baseball 6-5 on Friday Night. Wildcat Trey Haygood hit a solo homer in the sixth to break a 5-5 tie. Haygood also got the win in a complete game pitching performance.

The Valdosta boys soccer team (1-10-1) earned its first win of the season with a 2-1 victory in penalty kicks over arch rival Lowndes (6-5). Meanwhile, the Lady Vikings shut out their Valdosta counterparts with a 4-0 win. Jorge Valdez scored twice in 3-1 Cedar Shoals' win over county rival Clarke Central. The No. 4 Lovett girls beat McGill-Toolen (Ala.) 4-0 Saturday. (ranking according to EuroSportScoreboard.com) The Class A No. 1 Paideia boys dominated No. 5 Wesleyan Friday night in a 4-1 win.