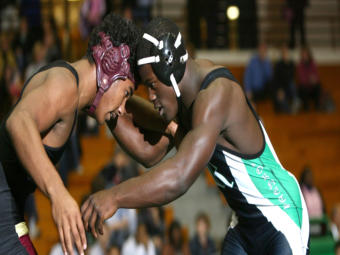 Several metro-area programs grappled their way into the state duals finals by finishing in the top two in area meets. Area champions and runners-up will compete in Macon this weekend for state championships.

Forest Park won its first-ever region wrestling championship after finishing 5-0 in the Area 4-AAAA meet Saturday. The Panthers defeated Lovejoy 44-30 in the final. Both schools will compete in the state duals Saturday.

Pope won its fifth straight region duals meet after winning the 5-AAAA championship Saturday. It is the Greyhounds’ second straight Area 5 championship after winning three straight 6-AAAAA titles. After defeating Paulding County 64-10 earlier in the day, Pope took care of Alexander 45-19 in the finals. The Greyhounds trailed the Cougars 15-7 before winning seven of the next eight matches.

Lassiter edged Etowah to win the Area 5-AAAAA crown 36-34. Both squads advance to the state meet Saturday. Paul Pelletier won the 120-pound match to give the Trojans the lead with one match remaining after Etowah had taken a one-point edge. Shelton Sellars then lost his match 9-7 to Etowah’s Bryce Verones in the 126-pound division, but the Trojans still held on to their lead.

Archer continued its season of firsts by winning the Area 8-AAAAA championship with a dominant 55-6 win over Brookwood. It was the first region title of any kind for the third-year Gwinnett school. The Tigers beat South Gwinnett and Grayson prior to the Brookwood match.

North Forsyth won Area 6-AAAAA with a 37-24 win over Roswell. The Raiders took down Centennial and Alpharetta on their way to the finals. Harrison beat Kennesaw Mountain 36-28 to win the Area 4-AAAAA championship. It is the second area wrestling title for the Hoyas.