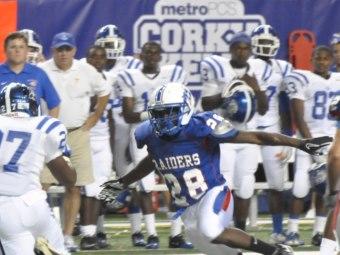 Former Brookwood head coach Dave Hunter was on hand at the Georgia Dome Saturday when the schedule was announced and he noted that the field would blow everybody away, especially with two south Georgia schools involved.

Kell returns to the event along to face Chattahoochee and the Longhorns and Cougars will kick the day off at 9 a.m. Kell fell 7-0 to Grayson at this year’s event. This will be the Cougars’ first trip to the Metro PCS Corky Kell Classic.

Grayson will once again make an appearance at the Classic, facing McEachern at 11:45 a.m. The Rams will put their 15-game winning streak on the line, tied for longest in the state, up against McEachern, which won earlier this season against North Gwinnett. Grayson will likely be ranked in the top five nationally as the Rams will return nine starters on defense including the best player in the nation, Robert Nkemdiche.

Colquitt County recently defeated North Gwinnett in the GHSA Class AAAAA playoffs, and the rematch will take place in the Georgia Dome at 2:45 p.m. Packers head coach Rush Propst will have his quarterback Cole Seagraves returning while Bulldogs head coach Bob Sphire will need to replace Scotty Hosch, who is planning to play quarterback at Harvard.

Camden County also figures to enter the season ranked near the top of the state and national polls, with several players already holding major scholarship offers. The Wildcats have played in the Metro PCS Corky Kell Classic before, beating Norcross in 2008 and losing to Grayson in 2009. Peachtree Ridge will be the opponent for Camden County in 2012. Kickoff is scheduled for 5:30 p.m. The Lions lost to Walton in this year’s Corky Kell Classic.

The final game of the day will be 2011 AAAAA runner-up Walton facing 2010 AAAAA champion Brookwood. The Raiders return most of their offense including running back Tyren Jones and quarterback Parker McLeod. Brookwood meanwhile will be led by running back Jamaal Cole. The kickoff is slated for 8:30 p.m.

Fans can catch all five games of the 21st Metro PCS Corky Kell Classic live from the Georgia Dome on GPB-TV.