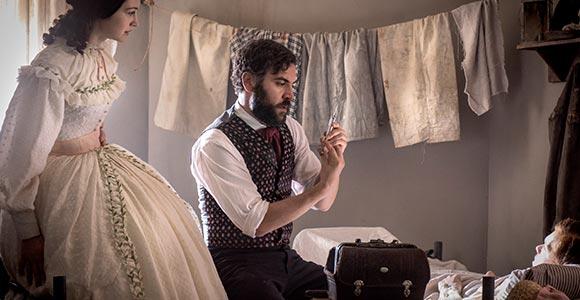 Mercy Street is unlike anything we’ve seen before on PBS. Airing after Downton Abbey, this PBS original drama gives us compelling characters, intriguing storylines, and a new way to look at the American Civil War. While we love watching Josh Radnor’s Dr. Foster and Mary Elizabeth Winstead’s Mary Phinney encounter new adventures each week, it’s impossible not to notice the injured soldiers, doctors, townspeople of Alexandria and other characters they interact with each episode.

Finding and training the extras to play these individuals for the show was the responsibility of Georgia casting director Chad Darnell. Darnell is an Atlanta native and has been casting television shows and films for close to two decades.

We had the pleasure of talking to him about the process of choosing extra actors, the unique skills an extra needed to learn to accurately portray someone living in 1862 and why no tattoos were allowed. You can read part 1 of my interview here here and keep an eye out next week for part 2!

GPB Family: How did you become involved with Mercy Street? Have you ever worked on a similar production or was this a very different experience as a casting director?


Chad Darnell : I was living in Atlanta last year when the executive producer, David Rosemont, called and asked if I would like to join them in Richmond for four months. When he mentioned Roxann Dawson was directing the first three episodes, I was totally in! I love Roxann. I worked with her for many seasons on Crossing Jordan in LA. She's a powerhouse and our other director, Jeremy Webb, directed some of my favorite episodes of Downton Abbey .

The next day I was on a plane to meet the producers in Virginia and discuss the look of the show. And as luck would have it, the next day I was hired to cast the extras for three weeks of Dirty Grandpa on the beach in Savannah as well as the extras for the movie Christine (which is debuting at Sundance) at the same time. So I was casting two features and the series for most of April through May, from Richmond. I didn't sleep a lot. I went straight from Mercy Street into casting The Do Over in Savannah.

GPB Family: Have you worked on any productions that were shot in Georgia?

Chad Darnell : I grew up in Atlanta and did a lot of casting in Atlanta in the 90’s, where I also worked as an actor. I moved to LA in 2000 and cast about 100 television shows and feature films, before moving back to Atlanta in 2013.

In the past two years, I worked on Selma , Magic Mike XXL Christine Dirty Grandpa Mercy Street, The Do Over and recently finished Imperium in Richmond with Daniel Radcliffe.

GPB Family: Were you looking for anything specific when casting the extras or speaking roles, such as accents or location?

Chad Darnell: Because the show is period and because a lot of studio wardrobe fits on the smaller size (and people were generally smaller in the 1800s), I was looking for lean people with natural hair, beards, great character faces and NO tattoos. And of course we were shooting in the tattoo capitol of the world!

Tracy Kilpatrick did an incredible job with our local actors, but many times I would get the call that we needed to cast a last minute speaking role and I put calls out through the local theatre actors and we read our core group of extras as well. Probably a dozen of our extras were upgraded to speaking roles.

GPB Family: What was the most difficult part of casting extras for this show?

Chad Darnell: Richmond is an incredible town. Our biggest challenge was finding thin, young guys with no tattoos to play the patients and finding lots of real amputees for the surgery scenes.

GPB Family: From what we've seen so far, many extras play injured soldiers on both sides of the battlefield. What was it like casting these roles, and what was it like for these extras to get into character? I imagine that it's not easy for many to understand what it's like to suffer from an amputated limb or septic shock from an infected wound.

GPB Family: I had to cast probably twenty extras who were amputees, which was a massive challenge. Because of HIPAA laws, you can't just call a local hospital and ask to speak to patients. But that's the challenge of casting!

We had one young actor who came in all the way from St. Louis to be on the show. One night, I was driving back from the gym with one of the actors and I saw a man missing a leg and I screamed, "amputee!" and jumped out of my car, forgetting to put it in park. He thought I was insane, but he appears in the show!

Our assistant director staff was really great about explaining the scene work to our extras every day. Our days were long and it was really hot and most of them were in heavy wool costumes. So the haggard and tired look came easy for everyone!

Next week, we’ll get the scoop about what the day to day life on a Mercy Street extra is like and how you may be able to spot Chad in an upcoming episode.