An Anthem for Back-to-School 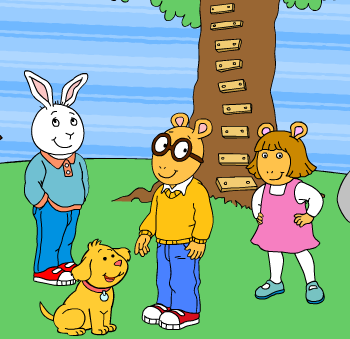 Chance the Rapper has reformatted the theme song from the PBS Kids program Arthur. Chance’s rendition of the popular theme song is eventually familiar enough to be lovable and different enough to be fun. He’s added a pretty long and artistic introduction (the video below is set to begin past that).

The video below was recorded by a fan at a concert in Canada. It's pretty fun to see the crowd engaging with the song that they know because of watching PBS as kids.

Based on the children’s books by author Marc Brown, the television show has been airing on PBS stations around the country since 1996, long enough for the first generation of its audience to have children of their own who are also watching the show. As those parents are striving to motivate children with back-to-school glee, we offer Chance the Rapper’s version and the original version below as a theme song for a great school year.

You can watch the original opener, sung by Ziggy Marley, in the video below. The lyrics are be found below the video.

Lyrics
Believe in Yourself By Ziggy Marley

Everyday when you're walking down the street, everybody that you meet
Has an original point of view
And I say HEY! (HEY!) what a wonderful kind of day.
Where you can learn to work and play
And get along with each other

Arthur is back for its 18th season this fall with 10 all-new episodes; premieres include a parody of Wizard of Oz in “The Friend Who Wasn’t There” and an homage to film noir with “The Girl with the Long Face.”