Monoclonal antibodies to prevent severe COVID-19 aren't being used as widely as expected. Medical staff shortages and patient transportation problems are two of the reasons.

Federal officials are disappointed to find that the monoclonal antibody drugs they have shipped across the country are not being used rapidly. These drugs are designed to prevent people recently diagnosed with COVID-19 from ending up in the hospital. NPR's Richard Harris has more.

RICHARD HARRIS, BYLINE: Charles Barnes knows adversity. The 72-year-old Maryland man says he served in Vietnam during the worst years of the war. He much more recently stared down another challenge - a case of COVID-19. Before Thanksgiving, he developed a stubborn cough and some chills.

CHARLES BARNES: It had gotten pretty bad one day, but - you know, but other than that, you know, I just had mild symptoms.

HARRIS: He and his wife got tested for the coronavirus. He came back positive. As it happens, the MedStar Health system where he got diagnosed had just started offering patients treatment with monoclonal antibodies - drugs designed to block the virus and keep people with mild to moderate symptoms out of the hospital. They asked him if he wanted to try the treatment.

BARNES: And, you know, I'm ex-military - and, you know, kind of explained the science behind it a little bit, and so I went for it.

HARRIS: He drove to a hospital in nearby Washington, D.C., where he had a one-hour infusion, followed by an hour of monitoring.

BARNES: And there were no side effects. And then I got in my car and drove home.

HARRIS: Barnes is one of about 100 patients who have been treated by the MedStar Health system in the D.C. region. Dr. Princy Kumar, who is helping coordinate that effort, says they could handle more cases; the biggest barrier is getting people to the hospital to get the infusion.

PRINCY KUMAR: As they are infectious, they can't just hail a ride-sharing app and show up at the infusion center. And many of them are reluctant to put a family member who has to ride with them in the car at risk. And so that's what they have identified to be our main challenge.

HARRIS: Talk about these drugs has shifted from people worrying about dire shortages to wondering how to get more patients in for treatment.

PETER NEWCOMER: I would say right now we're well below where we could be if need be.

HARRIS: Dr. Peter Newcomer, the chief clinical officer at University of Wisconsin Health, says they've been treating about five patients a day, and they have a lot more drug than that.

NEWCOMER: The good news is we can give this infusion to anyone that qualifies and that asks for it. Right now the bad news is we would like more people to call.

HARRIS: But the local hotline has been relatively quiet. The health system tried to bolster interest in early December through local TV stories.

UNIDENTIFIED REPORTER #1: They hope it can take the pressure off hospitals.

UNIDENTIFIED PERSON: I was fortunate enough where I didn't have to be hospitalized.

UNIDENTIFIED REPORTER #3: Outpatients who tested positive are encouraged to inquire about whether antibody treatments like Regeneron may be right for them.

HARRIS: But that didn't move the needle. The story isn't much different in western Pennsylvania. The University of Pittsburgh Medical Center has equipped 10 infusion centers. Dr. Ryan Bariola says staffing was one big challenge. Another is that people have to be treated within 10 days of their first symptoms, and some patients just give up.

RYAN BARIOLA: Twenty to 25% of our patients are declining even after they're referred to the drug and have the discussion with their primary care provider, either because they now feel better or they've thought about it further.

HARRIS: And some of the doctors in the system aren't so enthusiastic about it, either. That may in part be because treatment guidelines issued by the National Institutes of Health says there isn't enough evidence to show whether the drugs actually work.

BARIOLA: Of course, everybody's focused, rightly so, on the vaccine right now, and so, you know, we're trying to get their attention.

HARRIS: Stories like Charles Barnes' could make a difference, too. He heads up a 10-piece musical ensemble and, having recovered from COVID, is back to playing the trombone.

BARNES: And matter of fact, a couple of days ago, I did take it out of the case to see how my wind was, and it was OK. It was the same.

HARRIS: And he says he's also back to his regular exercise regime. His case of COVID-19 is now just another story for him to tell.

UNIDENTIFIED SINGER: (Singing) Well, it's a hot one, like seven inches from the midday sun. Transcript provided by NPR, Copyright NPR. 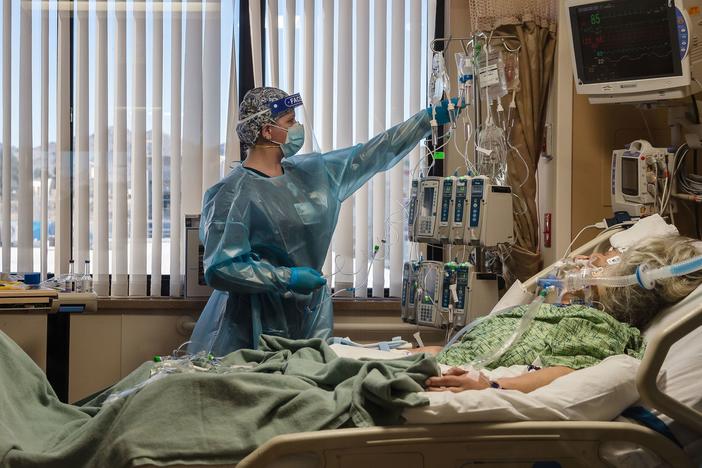 After A Year Battling COVID-19, Drug Treatments Get A Mixed Report Card

Drugs for COVID-19 are sorted into three basic categories: They work, they don't work, or there simply isn't enough information to know. A generic steroid is one medicine that proved helpful.

Antibody Drugs For COVID-19 Are A Cumbersome Tool Against Surges

Drugs that can help keep COVID-19 patients out of the hospital are playing only a small role in Michigan, where the pandemic is accelerating. Logistical challenges are to blame. 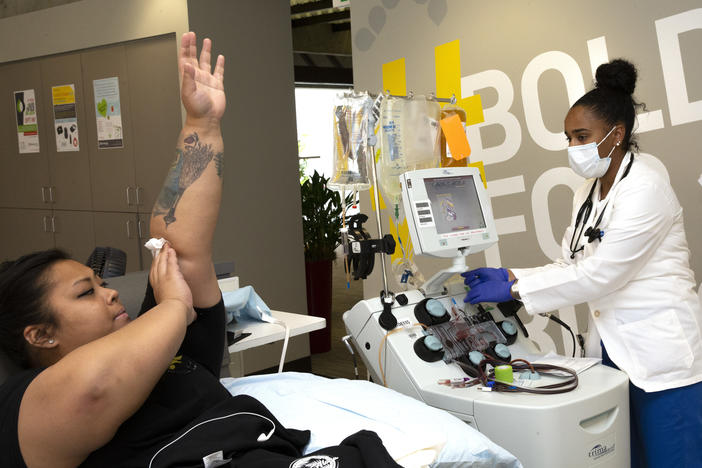 Infusing blood plasma from people who have recovered from COVID-19 into sick patients looks good on paper. But studies of the treatment haven't found benefits.